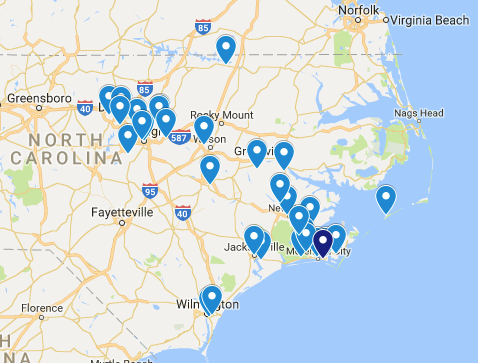 On April 1, the second annual Girls Exploring Science & Technology (GEST) event welcomed over 130 sixth-eighth graders to the Duke Marine Lab for a day of hands-on science and engineering activities with local researchers and educators. GEST’s objective is to provide opportunities and role models in science, technology, engineering, and math (STEM) for girls in eastern North Carolina, and to encourage them to pursue their interests in STEM.

A local newspaper reporter asked me for details while participants transitioned to their activities on the sunny, warm Saturday in Beaufort. He asked whether GEST was having the effect we intended, and this struck me at a weak point. As much as we hope the event impacts its participants, the truth is we don’t know exactly what effect it has aside from the positive statements received from girls and parents. Quantifying the event’s impact would require a long-term study of the participants as well as pre- and post-event surveys on their interest levels and confidence in STEM, among other metrics.

Luckily, the Duke undergraduate-led organization Females Excelling More in Math, Engineering, and Science (FEMMES) has been conducting these surveys for its own Capstone event, which GEST is modeled after. They found that fourth-sixth grade participants had significantly increased confidence and knowledge in science, engineering and math based on self-reported surveys 3 months after the event.

Recently, there has been greater emphasis on evaluating the impact of outreach activities. Researchers are now encouraged or expected to include these evaluation methods in their Broader Impacts statement in grant proposals. Evaluations metrics are useful for improving outreach efforts to increase the likelihood of achieving their objectives.

While we do not (yet) have detailed evaluation data for GEST, we are hopeful that the results found by FEMMES Capstone organizers extend to GEST as well. For now, we have several other metrics that are fun to investigate. And so I present to you:

GEST by the Numbers

We had 58 volunteers in 2016 and 65 volunteers in 2017. Together they represented over 13 institutions, agencies, or organizations. 2 volunteers this year were Duke Marine Lab alumni, Dr. Vicky Thayer (keynote speaker) and Dr. Joceyn Romano (Women in STEM panelist).

Where did the 135 GEST participants come from this year? Check out the map below of schools attended by participants (note: does not include homeschoolers). Most came from within Carteret County but many spent hours travelling to the event.

What did they think of the event? 107 participants completed an exit survey. Note: the goal of the survey was to learn how to improve GEST, not to gather scientific data for a long-term study on its effects. Surveys were completed in a frenzy prior to handing out raffle prizes, and not all girls answered all questions on the survey.

Of the 89 sixth- and seventh-graders who answered the question Would you come to GEST next year?, 86 selected Yes, 1 selected No, and 2 wrote in maybe/it depends.

The survey also asked girls to respond to the statement GEST made me more interested in math/engineering/science. Based on the results shown below, the event increased the majority of participants’ interest in science and engineering. Most participants’ interest in math did not change, which is not surprising since activities were not specifically focused on math topics.

12: Spaces used for activities at the Marine Lab campus

Our goal is to make sure GEST continues happening, such as by recruiting junior graduate students for the planning team so that knowledge can be passed down. I’d also like to recruit more activity leaders from engineering and math fields.

Nicholas School Dean Jeff Vincent visited the Marine Lab last week and spoke to the GEST planning team, expressing his support for the program to continue for many years to come. He offered suggestions for evaluating its impact such as by staying in contact with GEST alumnae.

Similarly, FEMMES created a mentorship program last year for older girls to connect with Duke students and take part in several activities throughout the year. If momentum for GEST builds, it may be possible to create a similar mentorship network in eastern NC, or at least start with a pen pal email program to connect GEST alumna with local scientists and engineers. In the future we could also craft a more detailed survey to track GEST’s effects.

The amount of support provided by the community and institution, in the form of both volunteered time and accepted funding requests, are truly motivating. The planning team and participants are grateful beyond words for all the people who have contributed and who will continue contributing in the future.