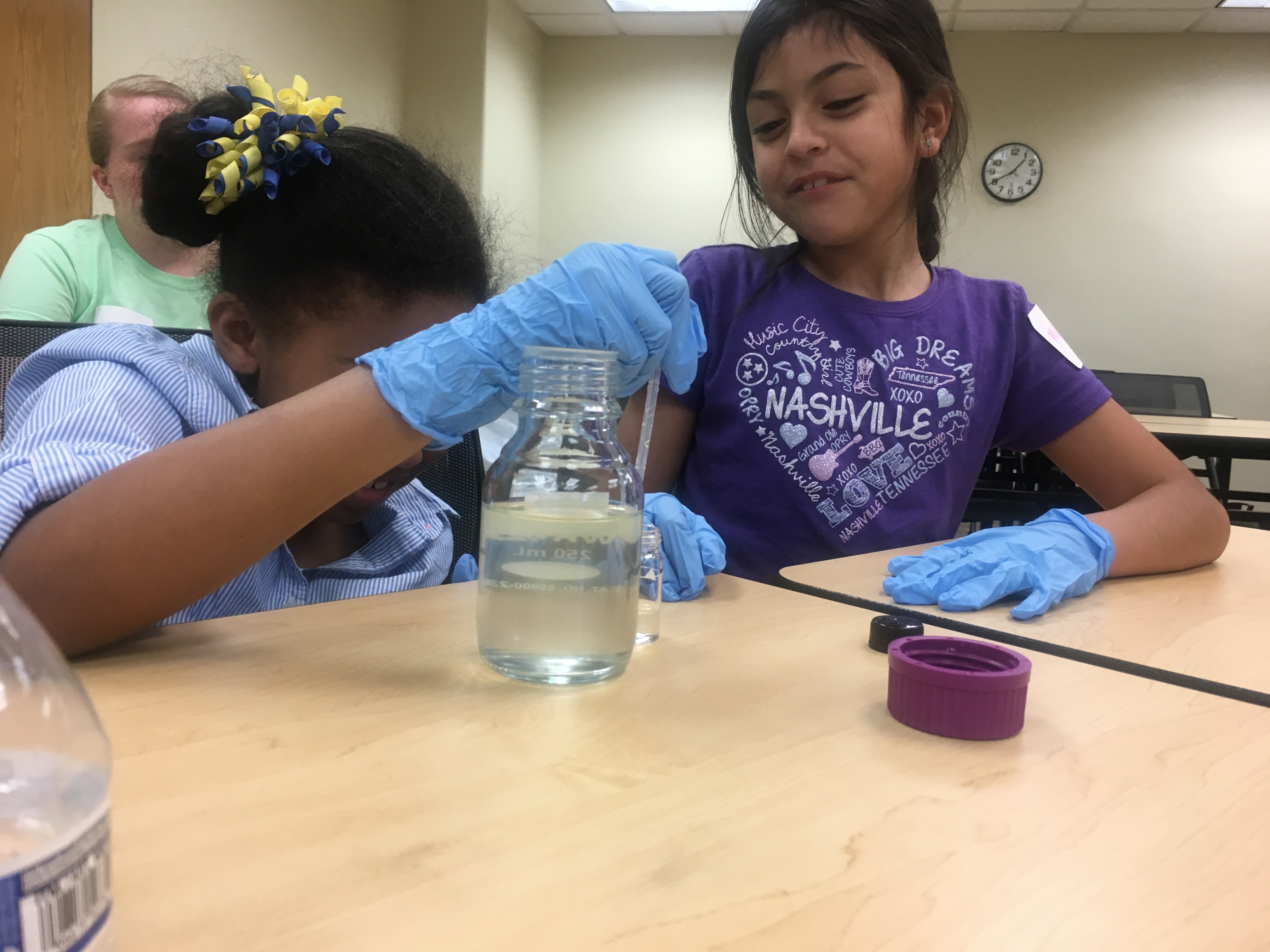 The Pivers Island gate beep-beep-beep-ed as it lifted to let my car through at 5:20 a.m. on a dark Saturday morning. I delicately packed our algae-filled bottles from lab and stored them in my car along with other lab supplies. Setting out on Highway 70, I picked up my lab mate Courtney Swink and we settled in for a 3-hour sunrise ride to Durham, sustained by black tea and coffee.

By 9 a.m., we lugged our turbidimeter, boxes of algae and display board into the Biological Sciences building on Duke’s campus. We had about an hour to set up before our first group of students would arrive for the FEMMES capstone event. FEMMES (Females Excelling More in Math, Engineering, and Science) is a Duke undergraduate-led organization that provides local female fourth-sixth graders with STEM opportunities and role models. These offerings include an impressive array of after-school programs, Saturday programs, summer camps and the annual capstone event. This year, FEMMES also kickstarted a mentorship program to continue connections with seventh graders and beyond. According to their site, their goal is to “allow girls to … explore their potential in STEM fields,” instill confidence in science and math skills and “empower them to pursue their dreams.” All volunteers are women with passions for STEM, showing girls that “women can and do excel in these fields.”

The annual capstone event invites local girls to campus to get their hands dirty (figuratively and literally) with science and engineering-related activities, which are designed and led by female faculty, graduate students and undergraduates. To set the tone and ignite some STEM enthusiasm, the day kicks off with a keynote speaker. Girls informed Courtney and I that this year’s speaker talked about Gaga ferns (check it out: a genus of ferns founded by Duke researchers and named after Lady Gaga). Girls then travel in groups to four different activities throughout the day, meaning that we led our activity four times, reaching a total of 30 girls.

This was my fourth capstone event, and each year the activity is tweaked as I learn what works well and what doesn’t. Courtney and I started each session by introducing ourselves and explaining what we do as graduate students (because I certainly had no idea what “graduate student” meant when I was a fourth-grader). We asked the girls what they knew about algae and passed around some algae cultures to show the diversity of colors and appearances. Next, we led the venn diagram activity I used last year, in which girls compare algae and human growth requirements.

After learning that algae need sunlight, water, nutrients and carbon dioxide, the girls were tasked with brainstorming how to find the optimal growth conditions for algae. They had some sharp ideas to test different temperatures, amount of air provided, different water sources and (with some hints from us) different light levels. When asked how they would test different light levels, the girls had no trouble coming up with four different scenarios: LOTS of light, no light, dim light, and ‘normal’ light (or, as we explained, the control).

Each pair of students chose one treatment to set up. To make growth medium, they weighed out nitrogen and phosphorus nutrients (really just salt and sugar) on a kitchen scale using the same weigh boats and scoopulas we use in lab. Then they inoculated their cultures using a plastic dropper.

We placed all the bottles on a sunny windowsill: one with a desk lamp shining on it, one under a black bag, one beneath a tinted screen and one with no additional treatment. On the whiteboard, we drew a graph for girls to mark their predictions of the algae growth results.

Although some girls hoped the algae would grow in 5 minutes, we explained that it would really take a few days, so we brought the “results” that we’d already grown in our lab. Girls used a turbidimeter to measure the turbidity, or cloudiness, of each algae culture – a quick way to compare the amount of algae in each bottle.

They drew bars on the whiteboard graph to visualize the results, which matched most of their predictions, with the “extra light” treatment having the highest algae concentration by far. But we further explained that too much light could cause photoinhibition, which would negatively affect algae growth. Even before we mentioned this, some girls used their gardening knowledge to predict that too much light wouldn’t be good for the algae.

I would call the activity a success because I witnessed most of the girls eagerly design an experiment, set it up and make hypotheses. Though we gave them hints and guided their thinking when necessary, they took the reigns and let their curiosity drive their learning process.

I think I can speak for both Courtney and I when I say we were completely exhausted after leading four activities. My vocal chords and feet pleaded for a break. But it was well worth the early wake-up and exhaustion because I believe that we made a difference for, at the very least, one of the thirty girls that attended our activity.

I highly recommend volunteering at the FEMMES capstone event and give it the highest praise. The student planning team is professional, friendly and organized, while dealing with hundreds of participants and volunteers. FEMMES also measures the event outcomes via student surveys. Undergraduates even published a peer-reviewed journal article in 2011 which showed “a significant increase in interest in engineering, and confidence and knowledge of math, science, and engineering three months after the one-day event.” At the Marine Lab, we have also modeled this capstone event by creating Girls Exploring Science and Technology (GEST), an event for sixth-eighth graders in eastern North Carolina.

It is imperative to show younger generations of women that they can be the scientists, inventors and engineers of the future. We must ensure they know, in the words of Hillary Clinton, that they are “valuable and powerful and deserving of every chance and opportunity in the world to pursue and achieve [their] own dreams.” Forward progress in science, medicine, engineering and the like requires diverse ideas, skills and perspectives, which can only be realized when the make-up of these fields reflects the diversity in our population. All scientists and engineers have a responsibility to help develop an inclusive community, to be aware of the current barriers to progress and, ultimately, to help knock down those barriers.