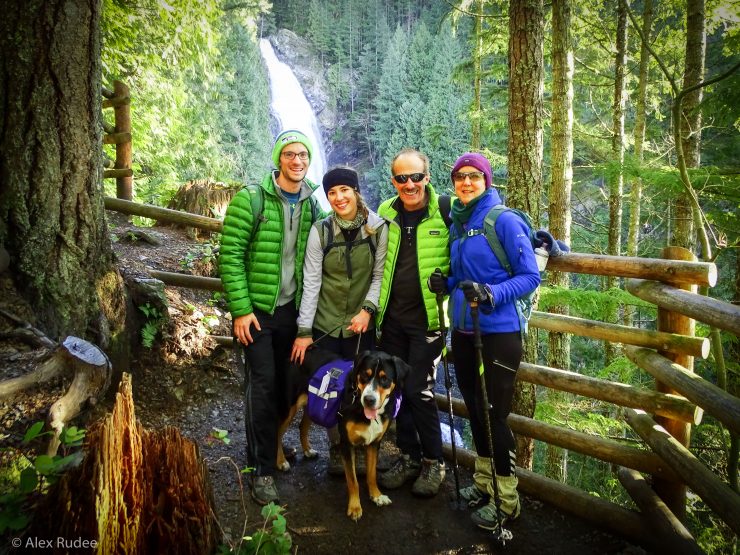 “Come forth into the light of things. Let nature be your teacher.” Some holiday traditions are as old as family lore, passed down from grandparents to mothers and fathers and then to bright-eyed children. This is not one of those traditions.

It’s only been in the last few years that my family has made a point, each December when my sister and I are both back in Seattle, to go for a hike–to bypass the department store Christmas trees and spend the day with real trees in real forests, often covered in real snow.

It may be a new family tradition, but it’s one of my favorites.

This year, our destination was Wallace Falls State Park, an hour northeast of the city on the way to the bustling ski slopes of Stevens Pass. The trailhead was marked with a wooden sign featuring a line from Wordsworth, as if demarcating the line that divided the world of tweets and holiday jingles from the world of birdsong and poetry. Through winding trails lined with massive sword ferns and branches dripping with emerald moss, we marched in a familial procession, our headstrong pup Luna leading the way. The three-tiered waterfall, which had been reduced to a trickle by summer drought, was now roaring in all its wintry majesty.

Beyond the falls, we transcended the snow line. The greens and browns of the lowland forest gave way to glistening white underfoot and blue sky for miles overhead. (No, it doesn’t always rain in Seattle!) As we walked back along an old logging road carved into the side of the mountain, I stole glances often at the forested valley spread out beneath us, the silhouetted Olympic mountains tracing the horizon to the west.

That’s what I call a winter wonderland.

If I think back on 2017, many of the highlights took place outdoors–and almost always on public lands. Before I chased my dog through the snow in Washington’s Wallace Falls State Park, I’d marveled at North Carolina’s changing leaves in Pisgah National Forest; backpacked through sweltering summer heat in Shenandoah National Park; flirted with the cliff’s edge at Hanging Rock State Park.

Public lands have always helped me to reconnect with what’s really important: sharing adventures with family and friends, immersing myself in nature, feeling small on a planet the way it once might have been. Our public lands help keep this country just a little bit wilder.

This blog has featured many new and emerging solutions to environmental problems, but it’s worth remembering that not all good ideas are new. Public lands in the US have been around nearly as long as the country itself, and they’re now more popular and valuable than ever.

It feels doubly important to recognize the value of public lands at the end of this year, which has brought more than its fair share of challenges. Rather than slashing budgets and raising entrance fees, let’s spend 2018 making sure more people from diverse backgrounds can access public lands. Rather than downsizing and rescinding protections on public lands, let’s work with local communities to ensure that they share in the benefits of public stewardship.

My family’s tradition of hiking on public land for the holidays may be new, but our country’s tradition of stewarding land for citizens like us is over 200 years old. I hope both traditions continue to grow in the new year.