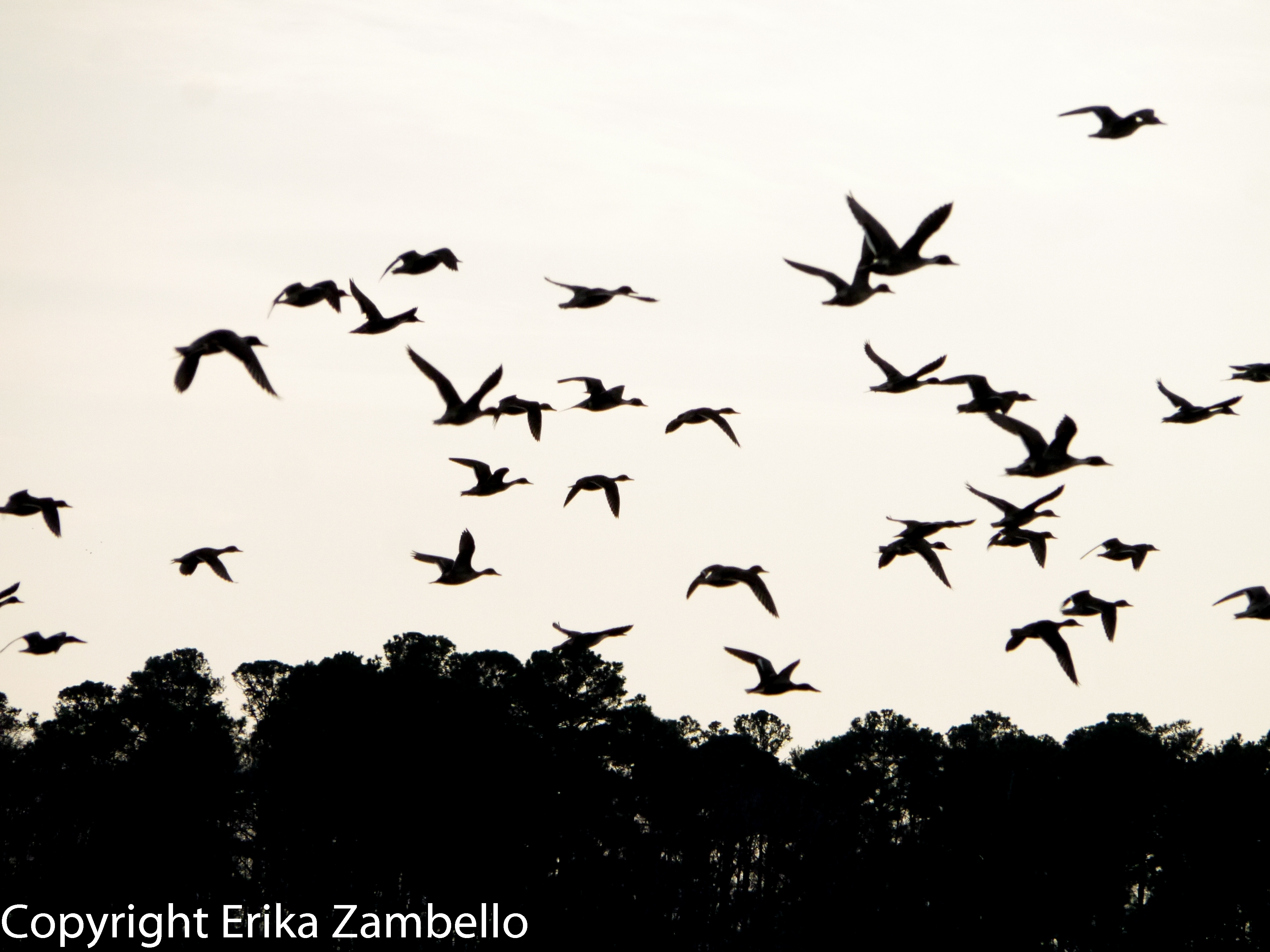 What better way to celebrate the end of a long semester than with a birding trip to eastern North Carolina? That is exactly what two Nic School friends and I decided to do this week before heading home for the holidays, and though it was a long day it was also an amazing day. I had missed seeing snow geese last January on a trip to the North Carolina coast, leaving a glaring hole in my life list and my list of sightings for 2014. I vowed I would not be so unlucky again, and perhaps a trip in December was just the ticket.

We arose early on a Tuesday morning, heading east at 7 a.m., just as the sun was rising. It’s a three-hour journey to Pocosin Lakes National Wildlife Refuge – our first stop – but with a little bit of music and lot of recapping the semester and catching up, the drive went quickly. As we approached our destination, agriculture fields suddenly filled with flocks of tundra swans, gulls, and Canada geese, all feeding on crop remnants before retiring to large water bodies at the end of every day. I had seen tundra geese during my last trip, but I felt our excitement rise as the early flocks foretold more birds to come.

Pocosin Lakes National Wildlife Refuge is huge, coming in at more than 100,000 acres. We definitely did not have time to explore the entire refuge, so we followed our N.C. Birding Trails book to the Pungo Unit, a network of dirt roads surrounding Pungo Lake. We hadn’t even reached the lake yet when we saw our first flock of tundra swans up close, feeding in a field off the side of the road.

We jumped out of the car, grabbing our binoculars and cameras and closing the doors softly behind us. Have you ever heard the sound a tundra swan flock makes? It’s an unreal noise, the conglomeration of hundreds if not thousands of the high-pitched, almost delicate honks of each individual swan. As they flew overhead, we could actually hear the sound of their wings beating against the wind. Tundra swans are incredibly beautiful birds, and in flight their bright white silhouettes almost remind me of angels, just in avian form.

We drove on, quickly finding the marshy edge of Pungo Lake. There were more tundra swans – many more – but no snow geese. I knew snow geese were probably feeding in the fields during the day, but I was surprised we had seen no sign of them thus far. Oh well, there was plenty more to see!

We journeyed to the southern tip of the lake, climbing to the wooden observation tower before having a quick lunch on its steps. We parked and walked a mile down the road to reach another waterfowl blind right on the edge of the lake. Here we saw not only tundra swans, but a variety of other waterfowl species, many of which I had never seen before, including the gadwall and American wigeon. Life list for the win!

It wasn’t only waterfowl we saw. Swamp and song sparrows sang at us from the marsh and the woods, Carolina chickadees and golden-crowned kinglets tittered in the branches overhead, and a camouflaged American woodcock spooked in front of us before rapidly taking cover in the dense forest. The day felt magical.

From Lake Pocosin we drove 45 minutes to Lake Mattamuskeet, an absolute favorite for any birder. Unlike Pocosin, where the birds might be far away, the American coots, northern pintail, and northern shovelers amassed here were barely 20 yards from us. Clouds had obscured the sun, shedding an almost sunset-like golden like across the water. Though there were still no sign of snow geese, I didn’t mind. In fact, I was feeling exceedingly lucky that we had spent most of the day surrounded by birds. They flew from the water to the land so often and in such great numbers the landscape almost seemed alive with avian motion.

Our final stop was the Swanquarter Wildlife Refuge, and a quick walk to the end of the fishing pier and back. The day had started out sunny and beautiful, but from where we stood we could see a storm roll in, and not five minutes after we jumped in the car to head home huge rain droplets splattered against our window and soaked the road. A dramatic end to a great birding day.

We ended the trip with 39 species, with four new life birds for me. In a way, it’s good that I didn’t see any snow geese. Now I have an excuse to go back!

One thought on “Searching for Snow Geese: Three Birders Journey to Lake Pocosin and Lake Mattamuskeet”