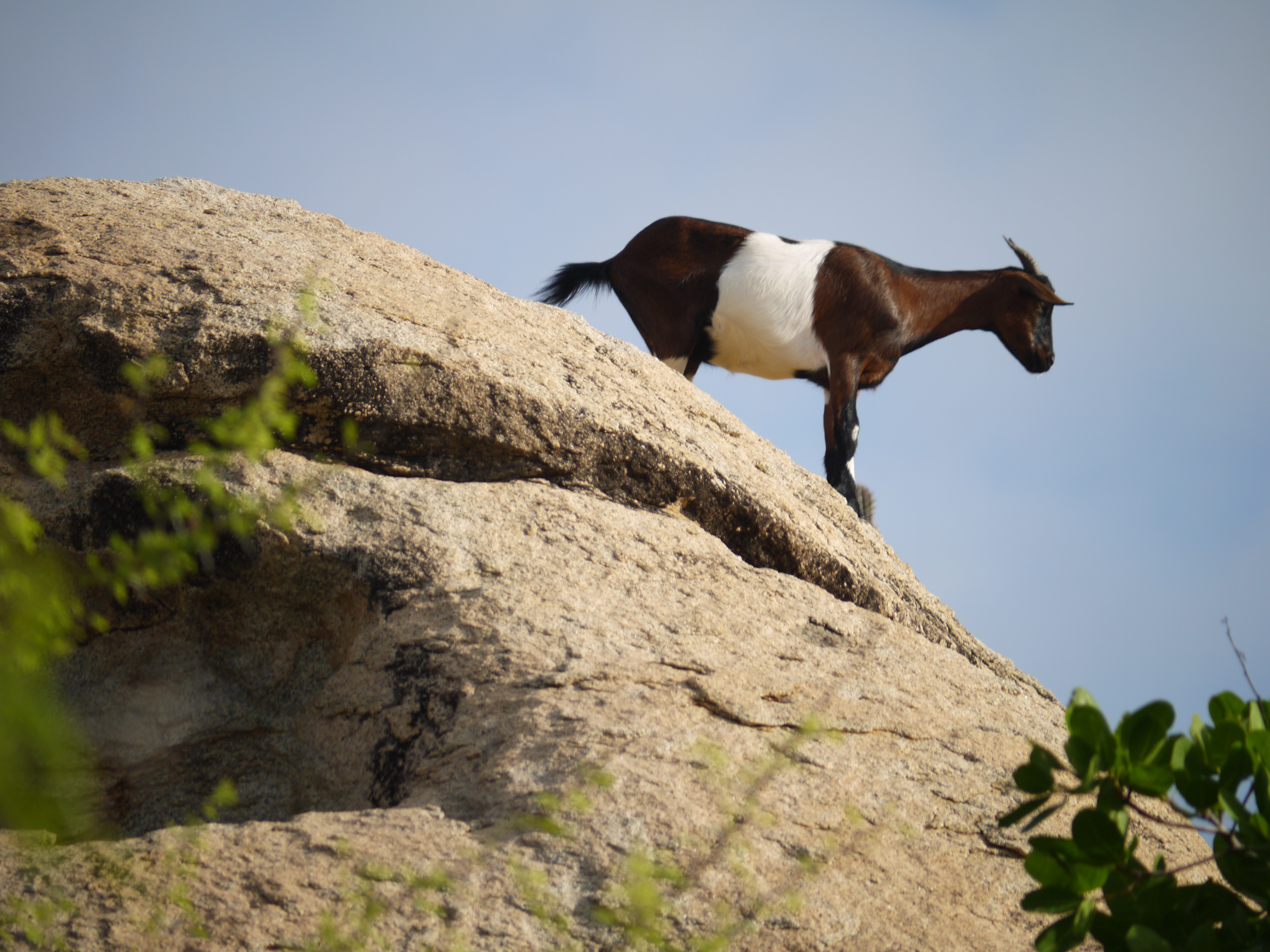 Invasive species are all around us, not only as we go about our day to day lives, but also whenever we travel, well, anywhere. Invasive species are an inevitable part of life in the global village of the 21st century, and never was this more apparent than on my recent trip to Aruba. I was lucky enough to spend a week in Aruba this winter break, and three invasive species in particular jumped out at me (not literally, thank goodness): house sparrows, feral goats, and boa constrictors.

House sparrows are just what they sound like, small songbirds in drab brown plumage that ransack city streets and parks the world over looking for tidbits. House sparrows may seem demure, but they have voracious appetites and out-compete native species. In Aruba they are present both along populated beaches, but also in Aruba’s Arikok National Park. While it is easy to blame house sparrows for their capacity to overtake native species, the Cornell Lab of Ornithology reminds us that house sparrows, “with their capacity to live so intimately with us, are just beneficiaries of our own success.”

I first came across the feral goat population problem in Conservation Biology last semester. For class we read “Feral Goat Eradications on Islands” by Karl Campbell and C. Josh Donlan, which details the lethality of feral goats to island ecosystems when they overgraze, decimating plant life and the species that depend upon it. Walking into Arikok National Park, I finally had first-hand appreciation of goat overpopulation.

There were goats everywhere. Inside the park, which covers 20% of the island, the goats were jumping on rocks, picking their way across ridges, feeding on grass and leaves, and even munching on branches thick with thorns. On a morning walk through the nature trails we heard more braying from goats than the calling of birds. Of every color, shape, and size, the sheer number of goats clearly demonstrated an overpopulation problem, even on dry and windy Aruba where access to fresh water must be an issue  during the dry season. However, I was happy to avoid perhaps the most devastating invasive species in Aruba: the boa constrictor. Introduced snakes have had a profoundly negative impact on ecosystems not only on islands, but also in vast environments like the Florida Everglades. The best, most depressing example of course  is the brown tree snake in Guam that has to date driven most of the native bird species to extinction, according to Vince Stricherz writing for the University of Washington. Will Aruba be next?

Found all over the island, Aruba’s boa constrictors, the subject of one of WildAruba’s most important presentations, can be as long as two meters and have the potential to out-compete the Aruba island rattlesnake as well as decimate the native bird population, who have evolved no defenses for such a lethal enemy. Boa constrictors are difficult to trap and have no natural predators, and only time will tell whether their numbers will strike a balance with Aruba’s native species or completely wipe them out.

The solution is clear then, right? We have to do what we can to wipe out invasive species; harvest the snakes, kill the goats, and remove the sparrows in order to give native species a chance. It may be difficult, it may be expensive, but it’s the only way. That’s what I thought too, at first. And then I saw the baby goats.

I spotted the pair as we drove from the interior of the park to its rocky coast. Surrounded by their adult companions, the kids were chasing each other and leaping off rocks three times their height with reckless abandon. They were cute, they were playful, and they brought a smile to my face. Suddenly, in my mind the eradication programs practiced on islands around the world didn’t seem like the perfect solution. What had the goats, the sparrows, the snakes done other than follow the universal instinct to live and have offspring? It was the carelessness and ignorance of humans, combined with our rapid range expansion, that has caused the worst invasive species problems in the first place. So there I was, sitting on a dirt road in the middle of a beautiful island, and a problem I thought was so black and white was now impossibly gray. I wish I could tell you that I had an answer for you, perfectly summed up in a 1000 words blog post, but I don’t. All I can say is, I will continue thinking, continue looking for some middle ground, some ideal solution that can protect native species without indiscriminately destroying the invasives that have suddenly found themselves in the wrong place at the wrong time. Sometimes full-fledged eradication may be the only solution, but there’s no harm in searching for an alternative!