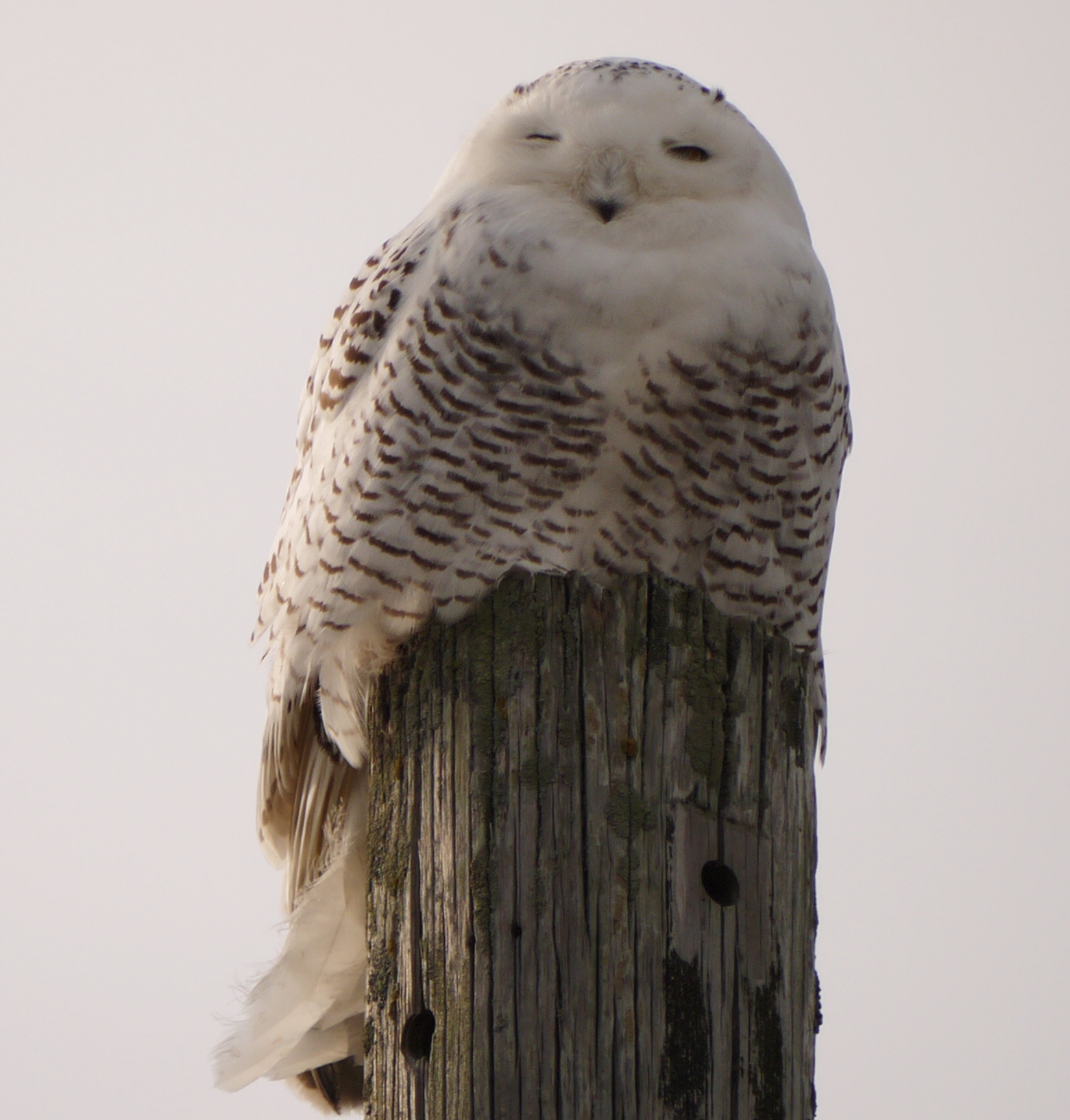 2013 was a strange year for Snowy Owls. In what is called an irruption year, thousands of Hedwig  look-alikes (for all you Harry Potter fans out there) have left the Canadian tundra and spread as far south as our North Carolina. It is not abnormal for those in the northern United States to catch a glimpse of a wintering Snowy Owl, but the vast number of owls dotting the United States this year has made searching for them, dare I say it, easy. I have spent my winter vacation in Maine, which was perfect since my home is one of the best places to find a Snowy Owl. I love birding but I have to be honest, I never expected to see one unless I made a long and cold trip up to Alaska. I thought of the Snowy Owl as more of a holy grail bird, something to dream of and sigh over but definitely not a species I would see in my very first year of birding. The irruption changed all that. People were seeing owls on chimneys, lamp-posts, even major streets in Portland, and I refused to be left out. It was time for an owl prowl.

My grandmother and I went in search of the owls one very chilly Monday. The internet is an amazing thing, and before we left I punched in ebird.org into my laptop to pull up where and when other birders had seen the Snowies. Armed with the knowledge that there had been dozens of sightings in the last week alone, we hopped in the car and headed to Scarborough Marsh, one of the premier birding destinations in southern Maine. Now, my grandmother is pretty awesome, if I do say so myself. Not only was it positively freezing outside, but when we arrived at the marsh trail it was completely covered in knee-deep snow. That didn’t stop her! The two of us waded out into the drifts for 50 yards until we reached a small, raised bridge that would give the two of us the best chance possible to see an owl. Only we didn’t. We saw beautiful Red-breasted Mergansers, Common Goldeneyes, a juvenile Common Loon, and a very brave little sparrow, but no owls. Strike one.

Next we headed farther into Scarborough towards Pine Point beach, a beautiful summer spot but also a possible Snowy Owl site. We parked by a motel closed for the winter season and once again battled the snow until we reached the beach, where the ocean tides had mercifully washed the rest of the snow away for easy walking. No owls, but no people either, and we spent a good half hour watching the sea gulls try to crack open enormous clam shells that had washed up onto the beach. Far out into the waves I saw a Black Scoter – a life bird for me. Still, Pine Point was Snowy Owl strike two. By the time we left the beach we were both chilled and damp, ready for a nice warm lunch inside somewhere. Heading back, my phone suddenly rang beside me, announcing its presence with my obnoxious ringtone that makes everyone think aliens are attacking (it’s the only way I can hear it if I’m sleeping). It was my dad, with another owl sighting. The place? Back Cove in Portland, right on our way home. We’d be crazy not to just try it, just for a minute.

I have to admit, I didn’t have high hopes for Back Cove. It’s a beautiful birding spot, don’t get me wrong, with a 3.1 mile trail that skirts a bay that is usually chock full of avian life, but after two misses I wondered if I was really meant to see an owl. We were much too cold to walk the entire three miles, so we headed to one side of the parking lot with a good view over the bay’s ice sheets. Lots of gulls, but no owls. Our boots crunching on the snow, we walked the distance to the other end of the lot. Suddenly, a giant pair of white wings spread before us and a beautiful, magnificent, perfect Snowy Owl launched itself from the rocks on the side of the path to a perch on the ice. Eyes wide, we nearly danced when we realized what we had just seen. A Snowy Owl was right there, had flown right in front of us. We had seen one! The owl sat on the ice, watching us, for five minutes before spreading its great wings again and flying off. Most of the owls seen in the United States are young owls, with heavy black barring distinguishing them from the mature adults that are closer to pure white. No one knows exactly why the owls are here. It could be that a dive in the lemming population, their principle food source, has caused young owls to migrate farther south in search of food. On the other hand, a bump in the lemming population could have caused a similar bump in the young owl population, who now must move south in search of less populated territory. Or, most ominous of all, global climate change may be causing the arctic tundra, where the owls breed, to shift or change in such a way that owls no longer want to or can raise young there. My head, however, was filled with the brilliant white plumage, the impressive wingspan, and the bright yellow eyes of the owl right in front of me. I knew that if I never saw another snowy owl again I would be thrilled that I had seen this one.

Only, I’ve seen not one but two since then. Inspired by our success, my other family members clamored to see owls too. The next day my father and I drove to Biddeford Pool, a town situated between a large river mouth and the ocean that far and away had the most owl sightings. Though it took forty-five minutes to drive to Biddeford Pool, it took only five to find our owl. Sitting delicately perched on wooden pole on a fishing pier, we had a much better view than I had had the day before. While many owls do not seem to mind humans approaching, it is important to note that they can be very disturbed without showing it. My third and final owl of 2013 took more effort. My mother and I had struck out the week before at Back Cove, and this past weekend with my aunt and cousin visiting from New York we wanted to try again. We first tried Back Cove for a third time with no success. Then we headed down to the Eastern Promenade Trail that skirts the water of Portland Harbor, and though we saw Common Eiders, Buffleheads, and another Red-breasted Merganser, there were no owls. Since Biddeford Pool had been the most popular owl destination thus far, we returned, and were thrilled to see an owl from the very same fishing pier where my father and I had had our luck. My best bird of the year was most definitely the Snowy Owl, and the fact that I could share its sighting with my family made it that much more special. It remains to be seen whether this irruption is just another in the cyclical highs and lows of the owl population, or a more permanent shift as a result of climate change. I urge everyone and anyone who can see an owl to give it a try as we enter 2014. I promise, you will never forget it!