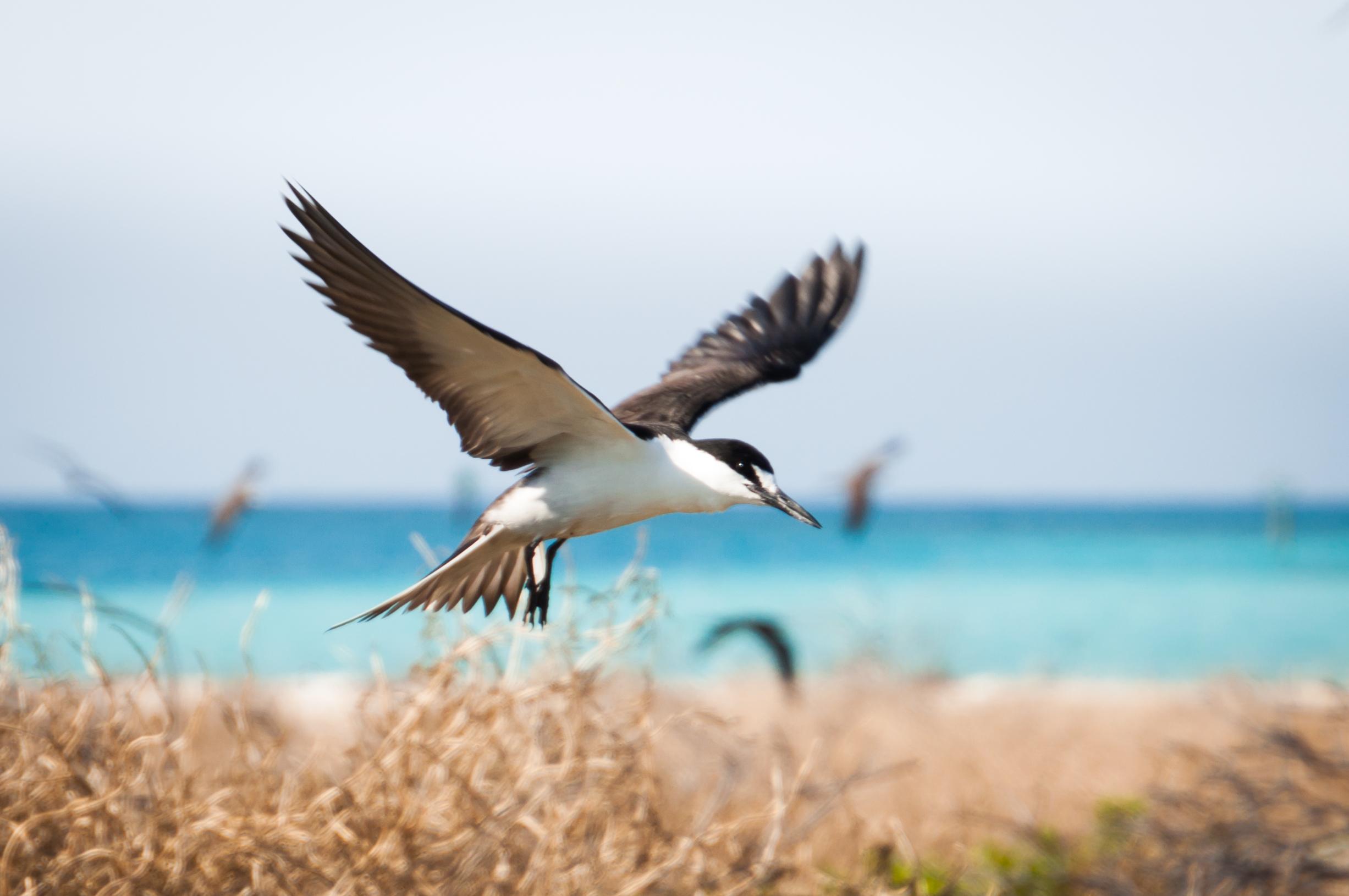 The sun glows on the horizon. Warm orange light spreads across the quiet ripples of the ocean. A pelican poses upon the the pilings, head tucked under her wing. You leave faint footprints on the fine coral rubble as you tread across the key. You plant your bare feet into the sand and stand still on the edge of the bush. You reach your butterfly net into the sky far above your head. A magnificent frigatebird glides by overhead, riding the gentle breeze. Around you, feathers flutter and a thousand terns rise and rush past you, skimming on the water. Each tern is small on it’s own, dainty almost. But the flock swells and swoops in unison, a blanket of chaotic calls sound above your head. You lean into your hunches, holding the position of a predator stalking it’s prey. Your shoulders tense for but a millisecond and you spring– The Sooty Tern is about as long as your forearm. It blinks indignantly at it’s captor, as you grip it’s neck and wings firmly to extricate it from the meshes of the net. Nipping impatiently at you with it’s thin, sharp beak, it aims a kick with it’s small, webbed feet as you affix an engraved metal band on it’s right leg. Weighed and recorded, you admire the feisty little bird one last time: it’s dark wings poised for flight; it’s clean, pearly belly; it’s bright new red mark reminds you of a bindi on a sacred Asian deity. You raise it into the air where it takes off into it’s element, uttering a piercing cry of freedom.

Here in the Dry Tortugas National Park, four hours by boat from Ket West, Florida, the Sooty Tern colony has crowded the key for longer than anyone can remember. A common seabird that migrates to West Africa and back for it’s thirty plus year lifespan, the adults can stay at sea for more than four years. Feeding on fish and riding the winds, the terns land to breed in rocky islands across the equator. The keys here are closed to visitors from September to April to protect the rookery of not just the Sooties, but also of the Brown Noddy and Magnificent Frigatebirds.

The National Park Service have been banding the Sooty Terns (Onychoprion fuscatus) for over 50 years to track their population dynamics and inform park management. These efforts have recently been overtaken by an enterprising professor that has found a way to harness the youth and energy of students to assist in field research in exchange for the enticement of beautiful beaches. Mentored by Dr. Stuart Pimm, Doris Duke Professor of Conservation Ecology at the Nicholas School, Ryan Huang, has been analysing the years of tern data and tracing the impact of hurricanes on their survival rate as part of his PhD, and Rebecca Cope, has been investigating the effect of vegetation and shoreline changes on tern populations as part of her Masters of Environmental Management. An eclectic mix of undergraduate and graduate students, and other guests camp out at the park every year for a week, catching and banding birds in the morning and evenings. As the sun’s heat beats down in the afternoon, we revert into our true forms: college students on spring break. Basking on the white sands and snorkelling among corals and fishes, and exploring the historic Fort Jefferson in our free time. When the stars glitter overhead at night, we gather with other residents on the island for seminars from the guests including Noah Greenwald, Endangered Species Director at the Center for Biological Diversity, and Kathryn McManus, a journalist and founder of CNN Japan.

As the sun outshines the North Star the next morning, again we trek out to the colony nets in hand – 800 birds and counting. Clothes stained with green guano and regurgitated fish, but spirits filled with appreciation for the breathtaking sight around us and inspired to contribute to the understanding of ecological interactions, we take our places by the border of the colony. Around us, life: newborn chicks squeaking for food, death: tern carcasses decaying in the sand, and everything in between. You lean into your hunches, holding the position of a predator stalking it’s prey. Your shoulders tense for but a millisecond and you spring–