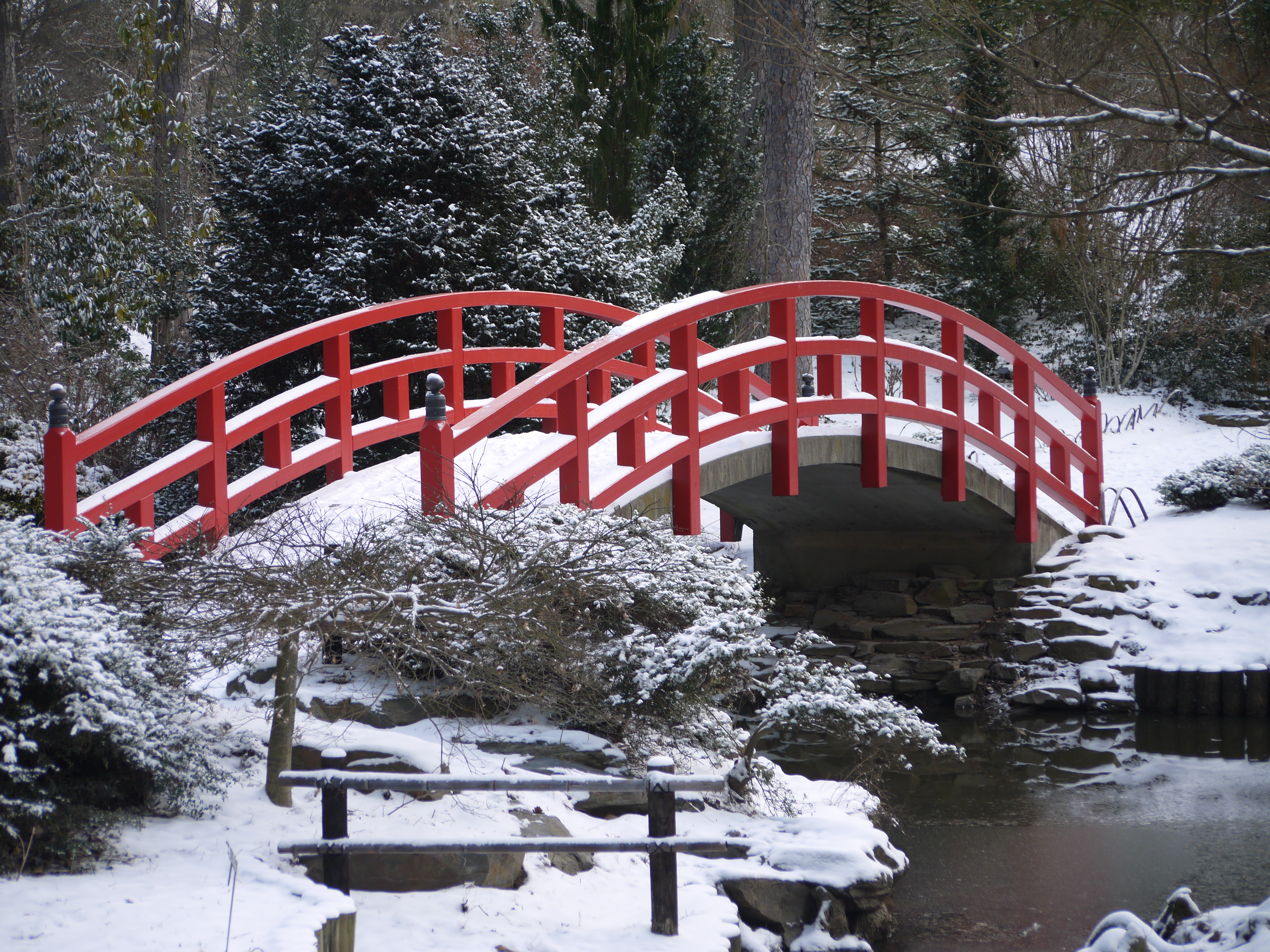 Last week was my first North Carolina snow. I have seen snow before, feet and feet and feet of snow in New England where I grew up. But this was southern snow, which meant it was special. Duke Gardens seemed to be the perfect location to take some wintery photos, so before the snow melted (but after the roads were safe) I hopped on the bus and headed to campus. The most iconic feature in Duke Gardens is the bright red Japanese-style bridge in the Asiatic Arboretum. The bridge is centered on one side of the Garden Pond – another Duke Gardens focal point. I tread across the path at the water’s edge, hearing the snow crunch beneath my boots. The ducks seemed unperturbed by the thin layer of ice that had formed on the pond’s surface, present but thinner than a common magazine. The mallards fed where open water met ice, bottoms straight up in the air as they fished underneath for vegetative material and algae.

The Muscovy Ducks, an exotic resident of the Garden Pond, were not so pleased. One particularly dark male was stalking back and forth on the path ahead of me, as confused as many south-hailing students at the presence of fluffy-white material under his webbed toes.

I found the bridge as beautiful as I had hoped. The sun was just beginning to peak out behind a haze of clouds, sending dappled shadows across the snow. From any vantage point the crimson bridge stood out like a bold brush stroke against the white, gray, and black wintery background.

From the Garden Pond I walked to the historic Terrace Gardens. Climbing to the top of the terrace, I stood beneath the bare and twisted branches of the wisteria entwined on the roof of the pergola. Beneath me the fountains sat with their frozen waters, silent and peaceful.

Though I enjoyed the scenery, I was also on the look-out for birds. So far, the most common species I had seen was the not-so-rare human photographer, and just like me they were taking advantage of the wintery conditions to capture their own photos. Still, in the Blomquist Garden of Native Plants, which is primarily forested, I hit the bird mother-load.

Not one, not two, but three separate bird feeding areas were teaming with avian individuals hopping all over the place as they fed on the flowing seed. The first feeder was full of Eastern Towhees, sparrows, starlings, and even Yellow-rumped and Pine Warblers. I took photos until I felt like my fingers were about to fall off, only to move twenty feet and find an even better, more open group of feeders. Downy woodpeckers pecked at the suet right next to Northern Cardinals, warblers, and White-throated Sparrows. My favorite little guy was a male Pine Warbler, sporting a bright yellow chest and all puffed up against the cold.

Deeper into the Blomquist Garden I made a beeline for the Bird Viewing Shelter, where I held my breath and watched Carolina Wrens as well as Tufted Titmice and Carolina Chickadees as they flitted from feeder to tree branch back to feeder once again.

I left Duke Gardens, not because I wanted to, but because I felt like my toes had become icicles and quite a few homework readings had begun to call my name. I have seen the gardens now in the height of summer, as well as the brilliant foliage of fall. Though snow is rare in Durham, I’m so happy I finally saw the gardens in true winter fashion!