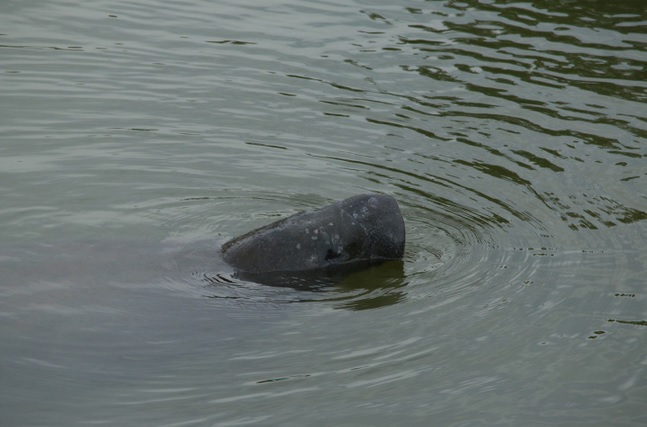 You wouldn’t think that manatees and power plants go together. Manatees are gentle mammals, nicknamed “sea cows.” Herbivores, they chew on aquatic plants as they slowly float and paddle from one place to another.

Power plants are, well, power plants. Large industrial structures, they sport huge smokestacks spouting steam into the sky while warmer water is released into Tampa Bay. And yet, every winter when the nearby water temperatures hit 68 degrees F or lower, hundreds of manatees flood into that warmer water directly beneath the power plant. My mom and I, both attending a nearby conference, arrived at the special Manatee Viewing Center on a Sunday afternoon. Walking on the special viewing boardwalks, checking out the information center, and walking through the butterfly garden are free, as the facilities are maintained by Tampa Electric (we can all admit that the manatees are pretty positive publicity, and they have done a good job with the center). The place was completely packed, attendants helping visitors find parking spots before they hit the raised boardwalk surrounded by mangroves.

Though we were obviously there to see the manatees (technically called the West Indian Manatee), it was the power plant that struck me first. The steam was thick, and Osprey and even an endangered Wood Stork soared through. Still, the manatees were impossible to miss. The backs of at least a hundred bobbed in the water, coming up for air every now and then in a slow ascent. Their large noses broke the surface for just a few moments, occasionally blowing super gross snot rockets before descending once more. Minus the snot, they were beautiful, their slow movements underlining gentle natures. I have never seen so many manatees at once; in fact, I have never seen that many manatees in my whole life!

I wasn’t the only one impressed with the site. The spectators ooh-ed and aah-ed when the manatees swam close to the boardwalk, squealed when a mother and her calf came into view, and yelped when great Tarpon or Blacktip Sharks sprang and flipped out of the water after prey. They weren’t the only fish – multiple species swam in the shallows, and between the fish, the birds, and the manatees themselves the whole area was chock-full of wildlife.

However, there were moments of solemnity. Many of the manatees had large white scars along their backs, remnants of run-ins with motor boats. These were the lucky ones; boat collisions kill manatees every year. In addition, I couldn’t help but think of a recent decision by the U.S. Fish and Wildlife Service to reclassify the species as “threatened” instead of “endangered;” would this affect their populations? When they were originally listed in 1972, there were barely over 1,200 left in the wild. Today, they claim the populations have reached over 6,000 individuals in Florida, though some environmentalists dispute this number.

Power plants continue to be a major draw for this large mammal species during the cooler winter months. As the plants eventually shut down or phase out, wildlife managers may have to consider ways to wean the manatee populations from the artificially warmer waters or create new man-made sources for the half of Florida’s manatees that depend on the warmer waters for survival.

The future seems to be uncertain for these iconic species. However, I have no doubt that opportunities for people to view the creatures are valuable. I listened to a father answer his son’s questions about manatees, from what they eat, to where they live, even to where their eyes are located on their heads. He was fascinated, and it’s possible that at that moment a manatee advocate was born. Here’s hoping their population continue to grow, and children of future generations can gaze upon vast herds of them as well.

One thought on “Florida Manatees and Electric Plants”