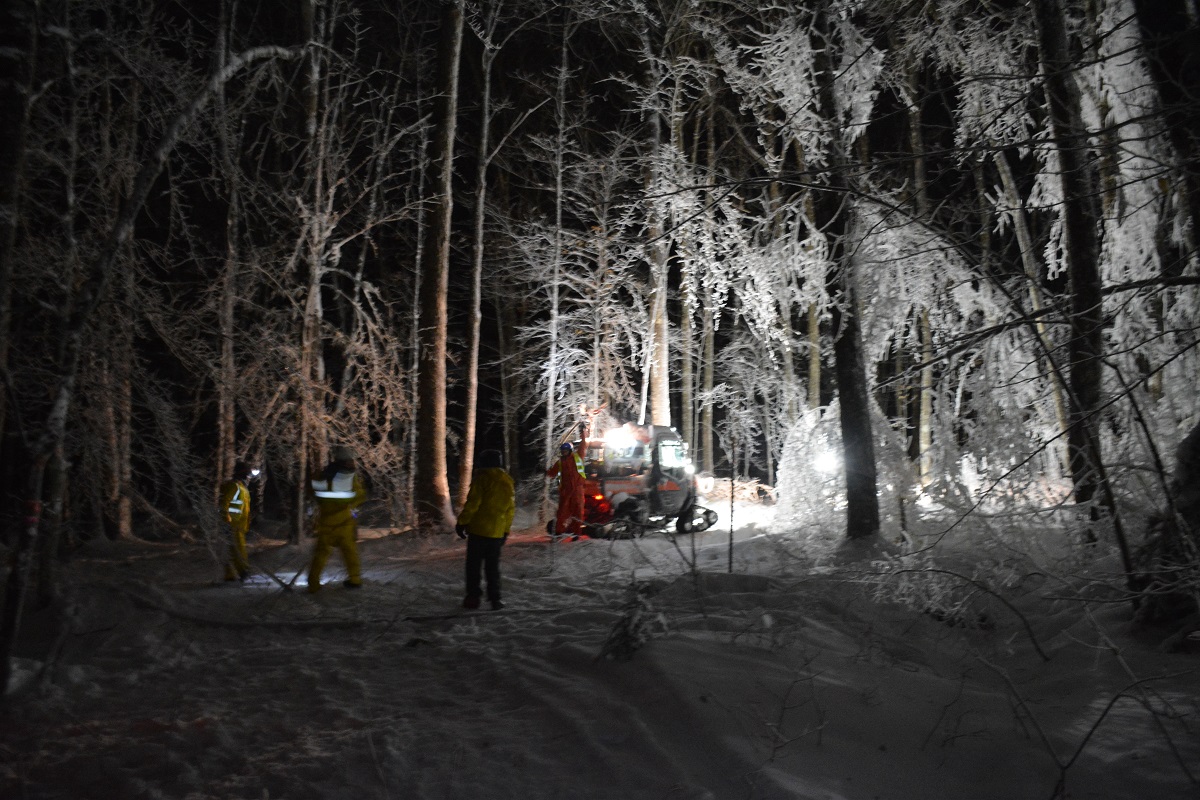 On a string of freezing nights in the White Mountains of New Hampshire, Dr. Lindsey Rustad and her team from the Hubbard Brook Experimental Research Forest aimed fire hoses at the canopy of a northern hardwood forest. As the spray fell, it froze solid on the branches and twigs of the surrounding trees. They had just created the world’s very first artificial ice storm.

In an email, Dr. Rustad answered a few of my questions about why they created the ice storm, how to fund such a large project, and why the data they hope to collect is critically important.

Q1. What is an ice storm? How do they occur naturally?

Rustad: “Ice storms form under a unique climatological condition called an ‘override,’ where an upper layer of moisture-rich warmer air moves over a lower ground layer of subfreezing air. Precipitation falling as rain from the warmer upper air layer super cools – but does not freeze – as it falls through the cold air, and then freezes on contact as it lands on cold objects such as tree branches, roads, or power lines.

Q2. What are the effects of an ice storm, on people and ecosystems?

Rustad: “Ice storms are a big deal. They disrupt road and air travel, result in massive power outages, cause closure of business and schools, and result in storm-related fatalities. The economic toll is in the billions of dollars… For forests, large ice storms have catastrophic short-term impacts due to branch breakage and toppling of trees under heavy ice loads.   They also have longer-lasting legacies on forest tree growth, increased susceptibility to pests and pathogens, changes in habitat for wildlife, and alterations in how nutrients like carbon and nitrogen cycle in the forest.”

Q3. How did you find funding for the project?

Rustad: “Funding is always difficult. I have the honor and privilege to be the Team Leader at the USDA Hubbard Brook Experimental Forest in the White Mountains of New Hampshire, and thus have access to a 7,000 acre outdoor laboratory. I first pitched my idea to a fellow research ecologist, Dr. John Campbell, who initially thought I was somewhat crazy. However, he was willing to consider the idea, and soon became as convinced as I was that we needed to better understand the impacts of these winter storms on forests.

We found we could make experimental ice on trees by spraying cold Hubbard Brook stream water onto branches as a fine mist under freezing conditions. Armed with this, our literature review, and the new climate model projections, we submitted a proposal to the Northeastern States Research Collaborative (NSRC) for a pilot study to apply 0.5” of ice to two 45 x 45 ft plots, with two same size control or reference plots. We successfully applied ~ 0.4” of ice to these two plots on February 9, 2011, and evaluated the short term response in downed fine and coarse woody debris. We wrote this up as the first ever paper on an experimental ice manipulation (Rustad and Campbell, 2012). We now knew we could do this at a large scale, and the next step was to put together a team of scientists and write a ‘full’ proposal to the National Science Foundation.

Q4. How did you create an ice storm?

Q5. What are the next steps?

Rustad: Our immediate next steps are to watch the short term response of the forest to the icing. Wind and warmth are the big factors in the days immediately following an ice storm. Maximum damage occurs when temperatures stay below freezing (so the ice does not melt), and winds are high.   We record these with sensors on site and in the Hubbard Brook Valley. We also have a time delayed camera on one of the plots and we can see the smaller trees that did not crack slowly bending over with the ice loads, and eventually trying to straighten up again once the ice is gone.

Over the longer term (years to decades), we gather lots of data on the amount of downed large and small branches, changes in the microclimate below the canopy (fewer branches means more sun on the forest floor, which means warmer and dryer soils), changes in how foliage and twigs decompose over time, changes in tree growth, whether the injured trees are more susceptible to pests and pathogens, whether we see different species of bugs and birds visiting and making homes on the plots in the next couple of years, and how nutrients like carbon and nitrogen cycle through these iced forests. We will use these data to improve a mathematical model of forest growth, and will then run this mathematical model with our revised climate projections. The ultimate goal is to better understand the impacts of ice storms on northern forests, to improve climate projections to see if we expect an increase in the frequency, severity and extent of these storms in the future as a result of a changing climate, and to use the best available science to understand how these changes will sculpt future forests.

Q6. If ice storms become more prevalent, what could that mean for ecosystems?

Rustad: Ice storms are deadly, costly, and destructive winter weather events. It is a big deal if these become more prevalent and more severe. These storms will cost communities millions if not billions in damage, disrupt daily lives, and change the shape and composition of our forests. Our forests are adapted to infrequent and moderate extreme weather events such as ice storms, hurricanes, droughts and excessive rains. We do not know how resilient they are to an increase in the frequency and severity of these events.

Research initiatives like the one conducted by Rustad and her team are critically important to understand the impacts of climate change continuing into the 21st century. Moreover, as they were standing in the forest, beams of light highlighting the ice freezing before their eyes on the branches overhead, they proved that science doesn’t have to occur in a laboratory, and can be incredibly cool (pun intended).