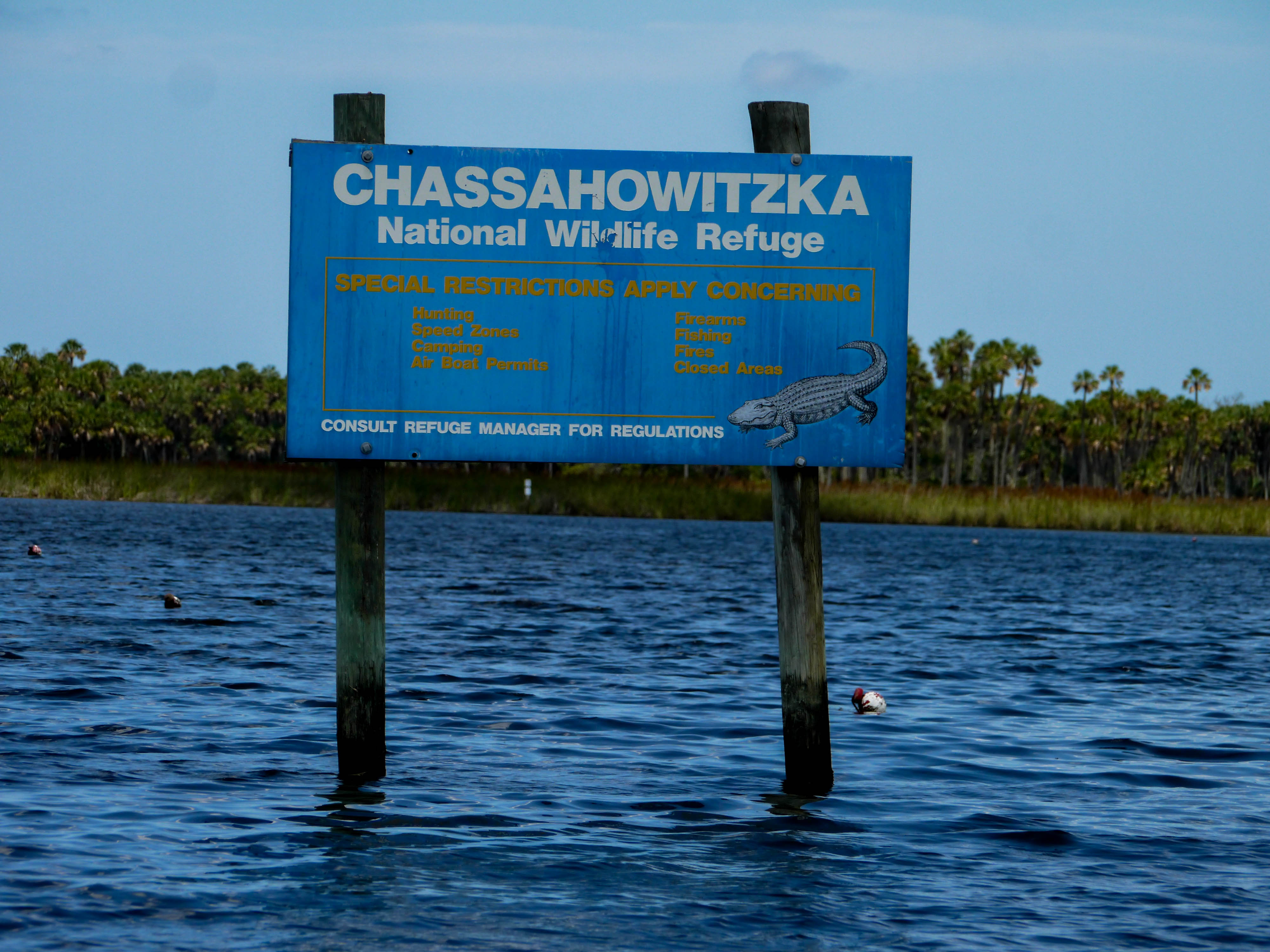 We arrived at the Chassahowitzka campground pulling a boat – the best way to explore the refuge. Paying a few bucks to launch, we slipped into the calm waters near the spring holes. A slight breeze kept the heat and the bugs off, while swaying the palm trees that lined the waterway. The vegetation along the shore was thick, and included white aquatic flowers as well as a varied understory. Reeds and underwater grasses glowed green beneath the surface.

I had never seen an underwater Florida spring before, so exploring these marvels was our first stop. As we moved slowly through the shallow waters, we encountered a dead end, and within that dead end, two separate spring holes. At first glance, I thought we had somehow made it to Never Neverland or a tropical lagoon. The spring holes were incredibly round and very deep, filled in with the bright white sand that gave the spring holes a turquoise color. The water emanating from the springs was a constant cool temperature and ridiculously clear, so clear that I could see every detail of the rock formations even when they were yards below the surface. Swimming is allowed, and so without further ado we launched ourselves over the side of the boat and to the edge of the springs. The holes are so deep that I could jump in, legs straight, without touching the bottom.

Though I couldn’t get enough of these glorious natural formations, we wanted to explore the rest of the refuge. Turning around, we headed back past the campground and towards the open saltwater marsh. As the waterway widened, we saw herons and egrets fishing along the banks. Large schools of huge mullet zipped past us underwater, as well as smaller fish and long-nosed needlefish. Overhead flew cormorants and my favorite Anhingas, as well as Ospreys and Turkey Vultures.

Oddly, we also passed by a line of houses. Perhaps grandfathered into the refuge, these houses were very basic, with docks and porches that jutted out across the shore while small water tanks indicated very short showers and a lack of “modern” plumbing. Here and there a docked boat announced an occupant, but for the most part they looked empty. One such house had even fallen into the water completely, only its roof and part of its front visible above the surface. It was a surprise to see houses, but it was mere minor human habitation compared to the expanse of the refuge.

The waterway eventually opened onto a huge salt marsh, dominated by grasses and a few areas of higher elevation where mangroves or palm trees could grow. Most of the birds we saw now were pelicans or cormorants, or the feisty female grackle who decided to land on the bow of our boat for a quick ride. Why fly when a human can ferry you around?

We fished for awhile. Though we were far from shore the water was not deep, and I could still see the aquatic plants beneath us. As we floated towards a small island, the water became even shallower, and through the 12 inches of water we could see the rocks and shells of the ocean’s floor.

As we neared the island, I heard a sound I had never before encountered. A strange snuffling, almost snorting, was emanating from the trees. Yet, all I could see were perched cormorants – a lot of them. Flipping open my trusty Sibley Guide, I turned to the page on Double-crested Cormorants. Black birds…diving…common… yada yada yada… all this I already knew. But wait! At the very bottom of the description, Sibley describes the grunting sound cormorants make then they are nesting. Without even knowing it, we had stumbled upon a cormorant nesting colony!

Not wanting to disturb them, we watched for a few moments before moving away. There really were cormorants everywhere, from the trees to the ground to floating along the gentle waves. Though there were no young that I could see, I was still thrilled.

The sun was descending as we headed back to land, but our trip was not quite over. Determined to find another spring affectionately named “the crack,” we headed up a small tributary. When I say small, I mean small. At times we had to pull the boat over sections too shallow for the motor, at others the water was barely wider than the boat. What would have been easy for a kayak or canoe was now nerve-wracking, as we had borrowed the boat and didn’t want to destroy the motor’s prop along the bottom, or hurt the plants or creatures living underneath.

I have to admit, I was a naysayer. Nervous about the boat and unsure of where we were going, I advocated turning back more than once. My friends – who granted have a lot more boat experience than I do – suggested we keep on to just around the next bend, just to the next pool. We knew we were approaching the spring because the water had turned an amazing blue color, and suddenly before we knew it, we were there.

The stream to the spring was six inches deep, so we walked the last 100 feet along the sandy bottom. At the spring itself the water widened to create an oval pool, perfectly blue and perfectly surrounded by trees, vines, and bird calls. It was magic. There was barely a ripple on the surface of the water, and little fish darted around our legs. The spring itself did look like a crack in the earth, descending into the dark blue darkness below. I had been a naysayer, but that spot is now my most favorite in all of Florida.

Given my recent adventures into refuges, it’s no surprise that I have a full-blown addiction. On road trips my eyes are drawn to the brown signs announcing their presence along the highway (a rather ugly brown at that; was green already taken?), and I linger over online descriptions of trails and natural features. Lucky for me, North Carolina has ten National Wildlife Refuges within its borders, and I’ve only been to two!