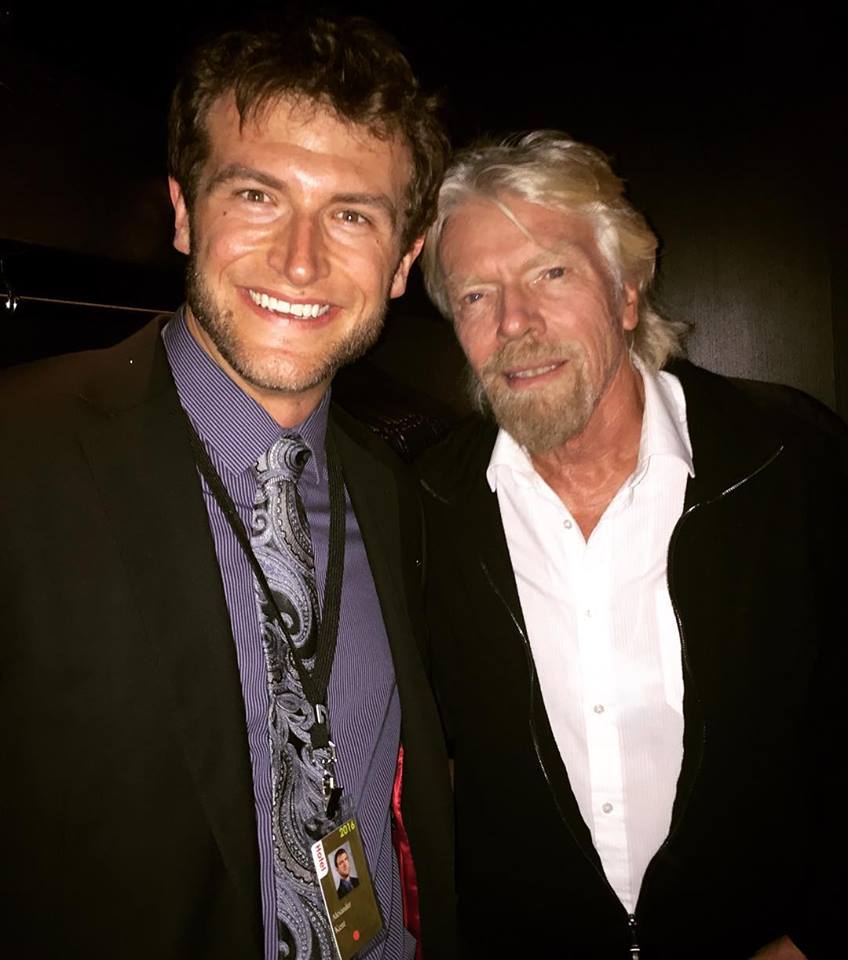 The room is poorly-lit, in a creative way, at a very chic hotel.

Low, red lights illuminate an unbelievable spread – all free, with an open bar.

Invitation only. Or you just have to know a Canadian.

Someone is standing up on a bench –really just an extension of the stone wall of the poorly lit room. She’s announcing something and she’s getting ready to hand off.

All earnest energy, totally captivating, the handsome Prime Minister bounces up on the bench.

Everyone has erupted. Earlier, the Canadian partiers were telling me all the reasons why they loved him.

“He has worked ordinary jobs in the past – he used to be a teacher. He only got into politics 8 years ago.”

“He has so much energy.”

“No one – no diplomats, no celebrities – would be here right now if this was Stephen Harper.”

“I’m just going to read this e-mail invitation out loud again – Justin Trudeau cordially invites you to the Hotel Grecia for a celebration.

People had quieted again – and it’s like the Prime Minister is at any old party, perhaps even a fraternity party, and he’s giving a toast, and talking about drinking a beer, and how happy he is to be here and meet everyone.

We’re going to get badges to join the show. We have access to just the Hotel Belvedere for only one day, but we still need a badge.

There’s no way we’re going to be allowed into the main proceedings, the World Economic Forum itself, where Javad Zarif, Foreign Minister of Iran, will soon take swipes at the Saudi oil policy and John Kerry will talk about the Iran deal.

Badges achieved – we battle the black Mercedes with tinted back windows and park in a grocery store parking lot.

We’re walking down snow-covered sidewalks when people from the Malaysian delegation offer us chicken from a recent soirée they had hosted. The chicken purveyor is a manger of the Malaysian sovereign wealth fund, and he is asking his co-worker what the co-worker has done with his phone.

His boss or co-workers dared or told him told him to dress in traditional Malaysian garb, and so he has.

Thanking them for the delicious repast, we continue on to the middle school gym where Ban Ki-Moon, the Secretary-General of the UN, unveils a set of advocates to publicize the UN’s Sustainable Development Goals – a set of 17 goals that should guide the global sustainable development agenda through 2030.

Many of these advocates are in attendance, including Richard Curtis, the director of the films Bridget Jones’ Diary, Notting Hill, 4 Weddings and a Funeral, and Love Actually. The director apologizes for the size of his boots, jokingly insisting that he has dainty feet.

This is the Open Forum –where anyone who wants to stand in line and accept a very thorough pat-down can come and listen to a speech.

Mr. Ki-Moon speaks briefly about his partnership with Mr. Mahama during the Ebola crisis – perhaps one of the few real moments during the weekend.

“We needed to set up a base to deal with the Ebola crisis. I called President Mahama and explained the situation. It was a lot of unknowns, a lot of uncertainty. Within five minutes of picking up the phone, the President offered Accra as the base we needed to fight off Ebola.”

There is a lot of the usual talk about needing concrete change and new ideas – and the usual hope and expectation that someone else would have the commitment and/or ability to create that change and those ideas.

Paul Polman, CEO of Unilever, rolls out some interesting statististics:

Creating true equal rights for women across the world would increase the Global GDP by $37 trillion (one-third of the current GDP).

Mr. Polman pointed out that we need to invest $2-3 trillion per year to implement the Sustainable Development Goals.

Jeff Sachs, of Columbia University, mentioned that we should not be scared of two or three trillion dollars of dollars of investment – there are 110 of them out there in Global GDP.

Ms. Solberg, the Norwegian PM, said the Sustainable Development Goals are not a menu – you cannot pick and choose which ones you want, but you have to embrace them all.

Then it was on to the Indonesia party. Another free spread and free drinks affair. Miss Indonesia was there, and she and a bunch of her foreign ministry pals really wanted you to invest in Indonesia.

Unfortunately, I was not in a position to invest in Indonesia, or pretty much anywhere else at the moment.

The next morning came our raison d’entre. We came in second place in the Business for a Better World Case Competition – proposing a realignment of the Norwegian Sovereign Wealth Fund (the world’s largest stockholder) to align more closely with a lessened climate change impact.

Our badges gave us access to the hotel, so that’s where we spent most of the day – with a brief fondue lunch break.

We noshed in fancy corporate lounges and read actual newspapers to save our phone batteries.

In the Hotel Belevedere, Deloitte has several walls of infographics devoted to understanding millennials.

Though I hate the term, those twelve or so of us competing in the case competition are the only millennials I have seen at the whole affair. Few, if any of us, are important enough to be there.

After lunch, we went to the bar to see who we could meet – drinks were free there too (low cost of capital for Davos participants).

The absolute magic in podcasting today is happening at Home of the Brave, hosted by former This American Life contributor Scott Carrier.

In a recent series, Scott followed the European refugee trail in reverse, from Germany to Turkey, talking to refugees along the way.

One episode focused on refugees who ran into a closed border between Greece and Macedonia. Some had sewn their mouths shut in protest.

Others were begging Scott to talk to President Obama, to Angela Merkel, to remove the barrier that kept them from completely fleeing the horrors of their homelands.

Their sorrow and desperation is so raw, as they rattle the names of famous Western politicians, asking Scott to get their message out.

In the bar of the Hotel Belvedere, a German fashion photographer tells me of widespread sexual assault purportedly perpetrated by the refugee community.

He mentions the New Year’s Eve event in Cologne, describing a situation in which over 800 criminal complaints were filed, as, according to the photographer, police stood by and did nothing.

He tells me how his own editor, to whom he had just briefly introduced me, had herself been the victim of sexual assault at the hands of refugees.

He used to support Merkel, but “not any more, not with all these incidents going unpunished.”

I met an American who lives in London now. His goal was to start the first ever options market for sports games. One of the outcomes of this would be to allow bookmakers to sell away risk, which they currently cannot do.

He tells me how validating it is to be at Davos – “People know that you are for real.” He has gotten in through a friend, someone one of his exes knows well.

The American has spent a lot of time with the chief of staff of the Prime Minister of Bulgaria.

The Bulgarians have decided to bring three or four former Miss Bulgarians to Davos for the night. Yesterday, the 2.5 hour ride from the Zurich airport to Davos had cost $6,000 for another Bulgarian VIP.

Uber has a service that allows you to charter private helicopters too, using its app. The service was oversubscribed at the Forum.

The American mentions Daniel Gilbert, the owner of the Cleveland Cavaliers, who wrote the heart-break open letter when LeBron James left Cleveland.

Apparently, Daniel Gilbert has been trying to get into the World Economic Forum for years. But he’s only worth $4 billion – he’s not a Top 100 billionaire.

He does a lot of charity work too. But he’s not a Top 100 charity guy either. He knows some people, but not enough.

Daniel Gilbert waits on the outside.

Presumably, he could get a message to Obama or Merkel, or some other famous Western politician if he needed to.

The Canada party is enthralling.

It is exclusive. People are taking selfies. Richard Branson is there. Bono is there. Kevin Spacey is there.

I can tell you that I shook their hands.

One of the other teams in the case competition had seen Bono out the previous evening. He had been taking selfies with a snowwoman for a few minutes from a variety of angles. He has assistants dedicated to the task.

As things wrap up, Bono throws the team a peace sign and says, “Catch you later.”

The Canada party is intoxicating – all the fame, all the charm, all the power.

Did I mention that Justin Trudeau is there?

My sole goal for the evening was to speak to the Canadian PM.

After a lot of waiting and following the fringes of a swarm about the room, I befriended one of his security detail, who, after some minutes, steers the PM in my direction.

“There’s no such thing as just an American.”

I endeavor on – I have messages to convey, some courtesy of Scott Carrier.

“I just wanted to tell you three things.

“We’ll look into it. What is your name?”

Due to falling commodity prices, and uncertainty over some of his policies, his Canadian dollar is trading at only 70 cents on the US dollar, a disappointing fact for me because our competition prize money is paid out in Canadian.

European governments expect a huge increase in refugees this year. The Dutch Prime Minister has warned that Europe only has 5 weeks to solve the situation.

The situation can only be worse in Jordan. Adjusting for the Jordanian population, if the US had accepted the same proportion of refugees as Jordan, we would be talking about more than 30 million refugees here – roughly the population of Canada.

One thought on “Don’t be scared of trillions”