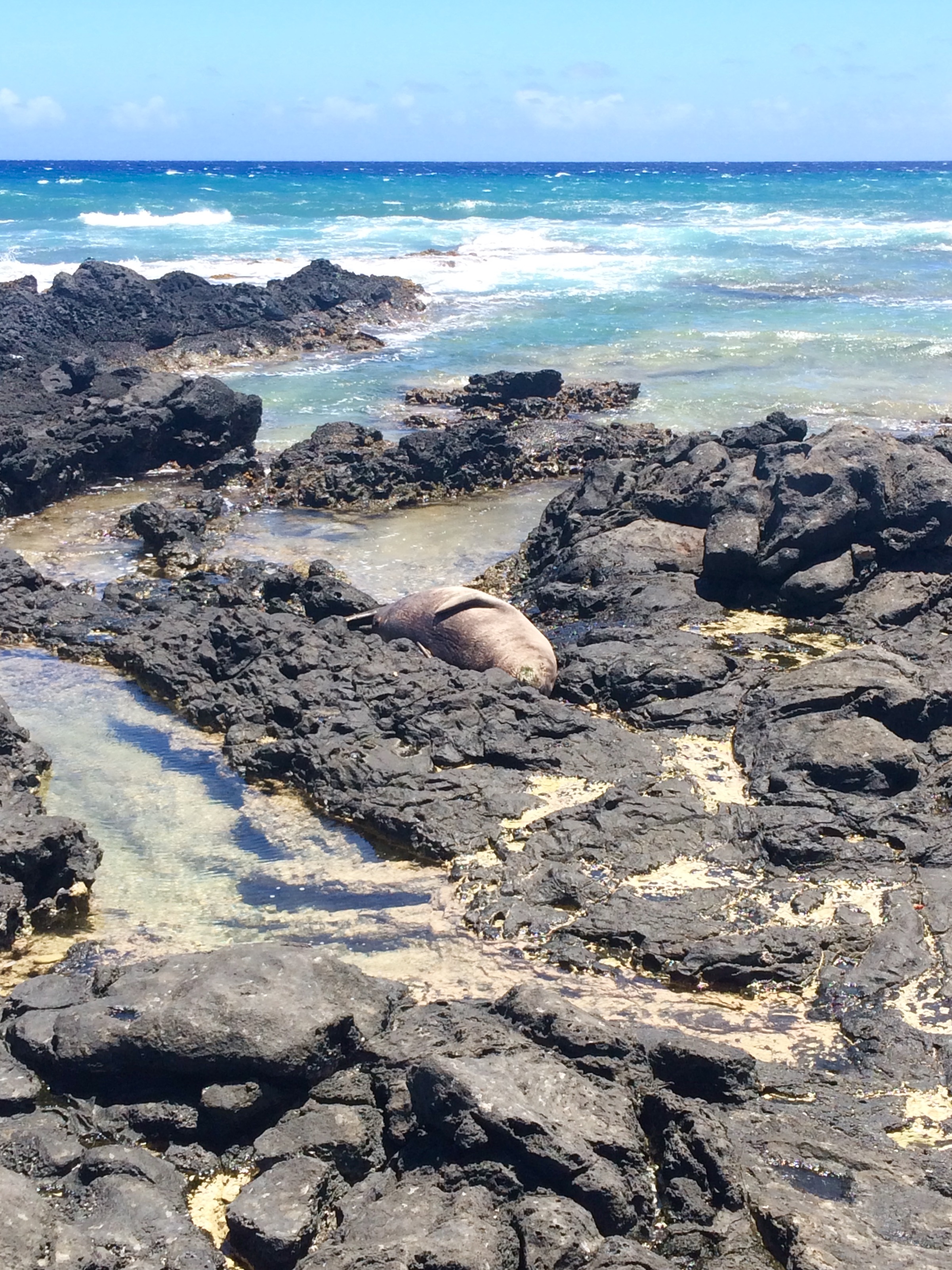 They say it takes a village to raise a child, and I’m starting to think it takes the same to recover a critically endangered species like the Hawaiian monk seal.

Meet the Hawaiian monk seal: A pinniped species aptly named for both its endemism to Hawaii and for the way that its fat rolls around its neck seem to fold like a monk’s cloak. They look awfully cute and cuddly, but don’t be fooled: when approached, they do not sit complacently like a sea turtle basking on a beach. Instead, they can bite and attack (pup’s teeth are especially sharp), and in the water, can mistake humans for a playmate and take you underwater.

The Hawaiian monk seal is a hot-button topic in Hawaii. Some audiences adore them and believe they played a role in Hawaiian history; others find them a nuisance and want them gone. In recent years (as recent as this past April), there have been a variety of clubbings and shootings against monk seals. A 2013 New York Times article does a great job summarizing the complexity of public perception towards this species, for those that are curious.

In addition to incorporating constant shifting baselines of public perception towards monk seal conservation, their distribution across the Hawaiian archipelago makes their management tricky. In the uninhabited Northwestern Hawaiian islands, monk seals are declining in number; in the increasingly populated Main Hawaiian Islands, monk seals are increasing, according to NOAA. This means monk seals are coming in contact with Hawaiian residents and tourists more often, bringing these animals into areas of increased fishing activity, disease, and other potential threats. Both regions carry their own set of threats, ranging from marine debris to fisheries interactions to declines in its prey, and thus warrants unique management considerations.

There is a small army working to recover this species in Hawaii. The National Oceanic and Atmospheric Administration (NOAA) leads an incredible program working to study, recover, and manage this species. The State of Hawaii, the Marine Mammal Center, and a wealth of NGOs work tirelessly on these animals as well.

Contrary to what my other blogs my warrant, my focus this summer was on monk seals and working on reports related to historical and cultural perceptions, interactions with fisheries, and more. Amongst all of the paper writing, there were a few highlight moments:

In late June, I attended NOAA’s annual monk seal recovery meeting, a full two-day meeting that covered everything Hawaiian monk seal related that one could imagine—from monitoring updates, to funding, to disease. NOAA maintains a superior quality website and publishes a range of publications on the species, for those interested.

Shortly after, I headed the island of Kauai, the oldest Main Hawaiian Island (and which turned out to be my “favorite,” if I had to pick a favorite island), to help the State of Hawaii’s Kauai Marine Mammal Response Program field coordinator with some monk seal work. This included vaccinating some monk seals (note: I was not involved in the vaccinations; just a witness) against disease, as well as attempting to tag several new pups this season.

We ended up tagging only one of Kauai’s three new pups this season, RH92. This process wasn’t as smooth as the vaccinations, which basically involved sneaking up on the seals while they were sleeping on the beach to vaccinate them. Instead, tagging involved capturing the seal in a net, with one person handling the seal in place while the other applied flipper tags, PIT tags, and took measurements (unfortunately, we were too busy handling the seal to take photos of the process). Doing so will allow scientists to be able to track and monitor this pup in the future to gain information about monk seal population health.

At the time of writing, only 1,300 monk seals exist today. It’s a very low number, but a growing one. The small army of people working on monk seals are attacking from every angle possible—research, management, monitoring, outreach, online communication, and more—and I am hopeful that this species will make it.