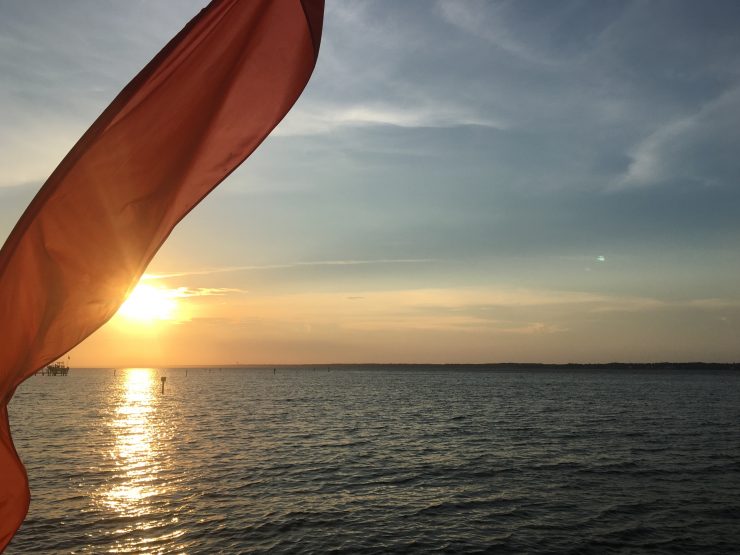 On Monday and Wednesday evenings during the summer, I make the familiar right turn off N.C. Highway 58 and enter a thickly forested neighborhood where retirees leisurely ride bikes on 25 mph roads. In less than half a mile the greenery gives way to coastal views of Bogue Sound.

Several years ago I joined a group of locals who swim in the sound. I had never liked swimming, but persistent running injuries nudged me to branch out. One friend gave me a few lessons in proper swimming form and another introduced me to a welcoming swim group.

Open water swimming has been a humbling experience that led to a more wholehearted appreciation for my coastal surroundings and community. When Hurricane Florence flushed debris and polluted waters into the sound this September, cutting our swim season short, it hurt to see the aftermath. While our community guts homes, bleaches walls, and chops fallen trees, Bogue Sound has also been recovering from polluted runoff and debris.

A sound is an ocean inlet or channel separating two landmasses. Bogue Sound sits between a barrier island spanning Emerald Isle to Atlantic Beach and the mainland spanning Cedar Point to Morehead City, all of which are in Carteret County. The sound follows the tidal cycle, so the water depth and salinity fluctuate based on whether ocean water is flowing in or out. Since we swim near the eastern end of the sound, we feel the push and pull of the tide from that direction.

Some of my peers do field work in the waters and marshes of eastern North Carolina. I don’t, but I think of us as swimming sensors for Bogue Sound.

We sense the temperature. Water temperatures in the sound allow open water swimming from about May to October, a luxury compared to the frigid summer waters I dabbled in as a kid.

We taste the salinity. Getting water in your mouth is unavoidable while swimming. When the water is particularly salty, it can leave your mouth feeling raw.

We see the water visibility. Bogue Sound is very murky. Visibility is about one foot, meaning I can’t see past my elbow when swimming, nevermind all the way to the bottom. Specs of brown goop, which are derived from sediment, plants, and algae, float around us and stick to our faces. When rinsing out my bathing suit, it looks like I brought the sound water home with me.

We detect the strength of the current and depth of the water. Some days the water comes up to my waist, and on others it’s just above my head. Swimming against the current is an exhausting workout. Sometimes I surface to breathe and see that I’ve barely moved forward, and my frustration builds enough to start fighting back. Cue the female power anthem songs in my mind: Christina’s Fighter, Destiny’s Child’s Survivor, Sia’s Titanium. When we turn around, the current helps push us along for a “free ride.” Depending on the wind and current, the water can also become choppy, requiring a more exaggerated head lift to get a breathe of air.

We feel the floating marsh grasses tangling in our arms and legs. The amount of floating vegetation can depend on conditions like wind speed and direction, and on ecological processes like marsh grass die-offs.

We witness wildlife like jumping fish, floating jellies and hunting herons. We don’t see sharks, except for that one time.

I don’t know what the water has felt like since Hurricane Florence, because we stopped deploying ourselves as swimming sensors. During and after the storm, runoff deluged Bogue Sound. The waters likely carried hazardous wastes, human wastes, and other potential environmental and health hazards. Even without this runoff, we never swim in the sound with open wounds due to the rare chance of fatal Vibrio infections. Adding to these naturally-occurring bacteria, the stormwaters brought in fecal bacteria which can cause illnesses.

On Sept. 28, two weeks after the hurricane hit, ocean-side waters of Carteret County were deemed safe to swim. Sound-side waters remained under a swim advisory until Oct. 9. However, alerts were posted again at multiple sites across Carteret County on Oct. 16. Every potential swimming location is not tested, though, nor are the test results immediately available (which has prompted local researchers to develop a quicker test). It’s, therefore, generally up to the swimmer to decide whether they should enter the water. Our group chose to stay safe and swim in a pool, which I’m less fond of since it lacks the adventurousness of open water swimming. Being relegated to a pool is an extremely trivial matter, though, when considering how poor water quality has affected people’s livelihoods. Our coastal surroundings are valued not just for their beautiful sunsets but also for tourism jobs and fishing income.

Open water swimming has taught me that, when battling life’s obstacles, a combination of brute force and efficient strategies are needed. I also learned that it’s okay to start something new—seeing your progress can be a beautiful thing.