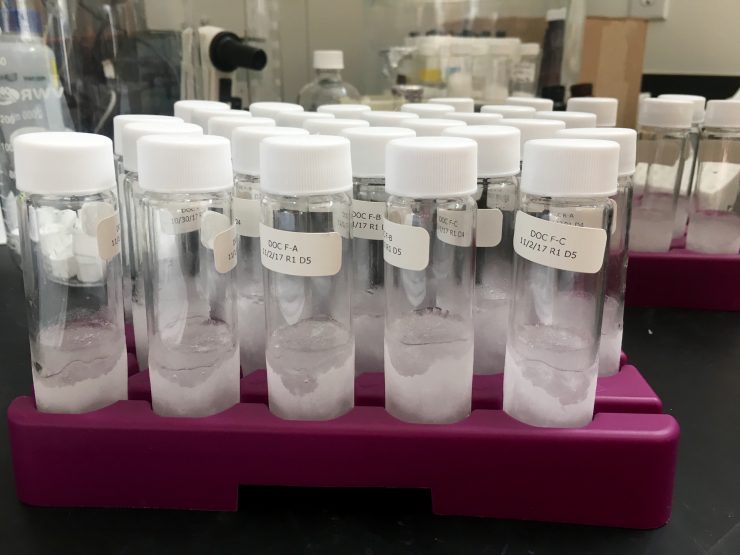 I press the power button on the total organic carbon (TOC) analyzer and it hums to life as it prepares for a dutiful day of measuring samples. As if the instrument is my patient, I carefully check it over for signs of concern. Then I refill its fluids – various containers of water and acid used for measuring, rinsing, diluting and humidifying.

I’m researching the organic carbon produced by plant-like microorganisms known as algae. Algae also excrete some of this carbon into the water they live in. Excreted carbon might be waste or could serve useful purposes such as communicating with other microbes, gathering required nutrients, helping the algae move and other functions that scientists still don’t fully understand. I want to know if the amount of excreted organic carbon in the surrounding water affects algae growth, and the TOC analyzer is a tool that helps me answer this question.

To collect samples of excreted organic carbon, I push a sample of my algae culture (a “culture” is the algae plus the water and nutrients they’re growing in) through a filter with holes that are 250 times smaller than the width of a human hair. The filter traps all algae, bacteria and any other broken pieces of cells. I collect the filtered liquid in glass vials, which were previously combusted (in an oven set to about 1,000 degrees Fahrenheit) to burn off all carbon.

I place the samples in the freezer where they’ll stay until I measure them. All look the same: clear, colorless liquid. But the TOC analyzer can measure the invisible carbon within, revealing their differences.

The instrument draws up liquid from the sample vials with a needle, so I remove the caps from the vials and secure aluminum foil on top, an inexpensive cover that the needle can pierce through. I load the vials into the sample tray, which is like a rotating carousel that will stop under the needle for each vial. With the instrument software, I specify the location of my samples in the tray so the instrument knows which vials to collect from.

I instruct the instrument to measure each sample 4 times, since there’s some variability with each measurement. This will take about 20 minutes per sample, so the instrument works overnight.

How the TOC Analyzer works

After the sample needle draws up liquid from a vial, it sends it to a syringe where acid is added and the sample is bubbled with air. The acidity and air cause all inorganic carbon (compounds like carbonates and carbonic acid) in the water to turn into carbon dioxide, which is a gas that escapes from the liquid.

Why I use the TOC Analyzer

I’m measuring carbon excreted by algae to determine how much accumulates in the water, since it could affect how algae grow. I’m interested in this topic because large-scale algae production would require reusing the cultivation water to decrease costs. Reused water would contain the excreted organic carbon left behind by previously grown algae. With the algae strains I’ve tested so far, I’ve found that the concentration of accumulated organic carbon in recycled water isn’t linked to their growth success. Other researchers testing different types of algae have found connections between algae growth and organic carbon, however (e.g., Depraetere et al, 2015 & Zhang et al , 2013).

The TOC Analyzer is the most effective and efficient way of measuring dissolved organic carbon in my samples. There are other methods to measure specific types of organic carbon, which I’ve previously written about. Other scientists may use TOC analyzers to measure water quality such as in wastewater samples, and the pharmaceutical industry uses TOC analyzers to check for contamination as required by regulatory agencies.

Behind every scientist using instruments to answer their questions are scientists and engineers developing these instruments and technologies, which is always a humbling thought.