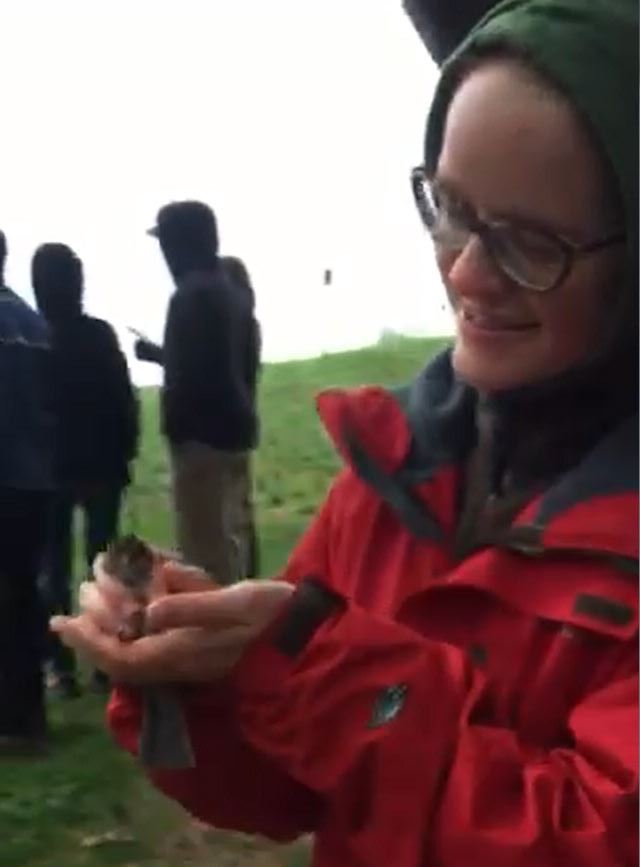 Earlier this semester, I got to taxidermy a bird. This was kind of gross but mostly cool, because at the time I thought, when else am I going to get to see a bird this close and actually hold it in my hand? Little did I know that in just a few weeks I would be holding (and releasing) a very live song sparrow, a green frog, and a meadow jumping mouse in three very different field trips for my Wildlife Surveys class.

Last weekend we met at Prairie Ridge Ecostation to observe trained volunteers capture and band more than two dozen birds caught in mist nests that they set up that morning.

Mist nets are basically loose nets made of very fine nylon thread that is hard to see, especially for birds. They fly into the net, fall into the bottom of where there is a sort of pocket, and get tangled up enough that they can’t get out until someone with a lot of patience and dexterity untangles them. This robin, for instance, had managed to not only fall into the net pocket but also swing himself around the side of the net so that he had to be untwisted before you could start taking the net off him. We were lucky to have two experienced bird banders with us, PhD students Scott Winton and Natalia Ocampo-Peñuela, who are both experts at extracting tangled-up birds. Once they were out of the net, we placed them in cloth bags to keep them warm. It was pretty cold and damp, so we put the birds inside our jackets, where they stayed calm and warm. After banding and inspecting the birds, Scott, Natalia, and the other volunteers let us release the birds. I never imagined I would get to hold a bird in my hand, but that morning I got to release three song sparrows! They were all small enough that I could make a sort of cage around their body with one hand while putting my other hand under their feet. This is called the bander’s grip. Banding is really useful because it allows researchers to track birds over time, which has helped them answer some of the most basic questions about birds, like how long they live, how far they fly, and how their bodies change over time.

While bird banding was probably one of the coolest things I have seen in my entire life, it wasn’t the only awesome thing we did that week. The night before, we met at Sandy Creek Park for amphibian surveys. We were there with a group from the NC Sierra Club, which included families with some kids that were frankly awesome at spotting and catching frogs and toads. All in all our group found some 6 or 7 species, including a bull frog, chorus frogs, green frogs, and an American toad. Squelching around in the mud and the dark catching frogs and toads was seriously one of the most fun things ever, but it wasn’t the end of our adventures.

This past weekend we set up 50 small box traps at Duke Forest Gate 12 in the hopes of catching some curious little forest critters. We didn’t catch anything the first night, but the second morning we found a mouse! We shook it out of the trap into a plastic bag so we could ID it. We measured his tail, body, and hind feet, and determined it to be a meadow jumping mouse, which are pretty common in most of the US. After we figured out what it was, we opened the bag and let him scamper back under the leaves.

While I may not get another chance to release a captured bird, hunt for frogs with adventurous middle schoolers, or hold a live wild mouse (in a bag), I’ll definitely look for new opportunities to learn more about these fascinating creatures whose world I am lucky to share.