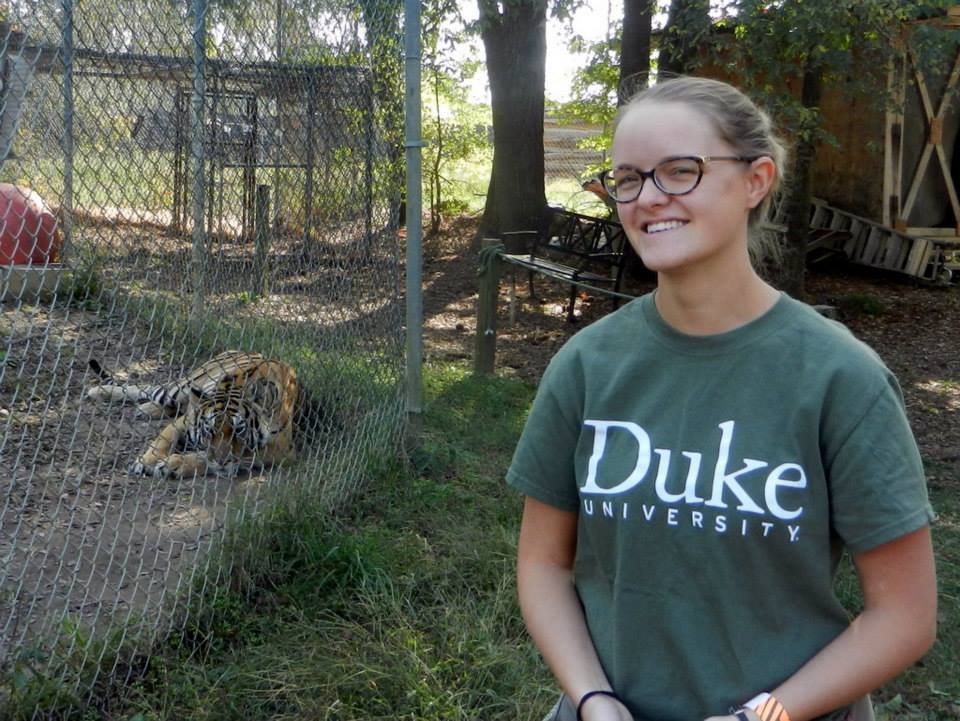 Carolina Tiger Rescue is a sanctuary in Pittsboro that currently houses almost 50 animals: tigers, lions, caracals, servals, cougars, ocelots, and kinkajous. A few weeks ago I got to tour the sanctuary with the Duke Conservation Society, a student group at the Nicholas School. This was my first visit to CTR,  and I was stunned by the animals’ beauty and saddened by the stories of their past lives. Many of the cats come from roadside zoos, entertainment attractions, or private owners who could no longer care for the cats once they reached adulthood.

While the sanctuary is not an ideal habitat for wild animals, Carolina Tiger Rescue does their best to ensure long, healthy lives for these animals that cannot be released into the wild – they were not raised there, and severe habitat loss means that most of them don’t have anywhere to go. At CTR, the animals are well fed, receive regular medical check-ups, and benefit from daily enrichment, such as a new toy or a special treat.

The animals are far from pets; they have their own space, and CTR does not allow any direct contact between visitors and the animals. Only some of the animals are comfortable around groups of people; others we saw from a distance but were not part of our tour.

Below are some photos and descriptions of a few of the animals we got to meet. The photos don’t do the animals justice, and I encourage you to visit the sanctuary yourself. As a non-profit, Carolina Tiger Rescue depends on proceeds from tours and other community outreach activities to continue caring for these beautiful creatures.

This is Elvis. He’s a serval, which are found in the African savanna. Elvis was left by his previous owner in a crate in the CTR parking lot. When CTR staff found him, he was wearing a collar that was much too small and cutting into his neck, and his back leg muscles were atrophied – both indicators that he had been kept in the crate for a very, very long time. In North Carolina, there are no laws against private ownership of wildcats, though CTR is working to get this changed. Now Elvis is fully recovered and has his own enclosure, where he likes to hunt snakes and other critters that wander in.

Here’s Petee the ocelot getting his daily enrichment – a mirror placed against the fence. The goal with enrichment is to introduce something new into the animals’ environment and stimulate the animals in some way either mentally or physically. Petee was born at Carolina Tiger Rescue when it still had a breeding program. Though this program ended in 2000, Petee is still on the list for Species Survival Plans and could still be called out for breeding, though at 16 years old it’s not too likely.

Natives to North America, cougars are one of the largest cats that can purr. This one is a female named Star, who is 18 years  old and weighs less than 100 lbs – on the small side for a cougar. Though you may have heard stories about cougars (also called mountain lions and panthers) in the North Carolina mountains, they were likely extirpated from the state many years ago, and are now only found in the western US and part of Florida.

Rajah (left) shares his enclosure with a female named Kaela (right) who CTR keepers think is his sister. They were both found as cubs walking alongside a highway near Charlotte. While we were watching them, they startled us by coming right up to the fence and play fighting.

“King of the Jungle,” Roman the lion actually belongs in the African savanna. He and his sister Reina, shown behind him,  are fed whole chickens five days a week – in the wild, lions don’t eat every day.

Leah arrived at Carolina Tiger Rescue just a few months ago after being rescued from a private home in Alabama – another state that has no laws against private tiger ownership.

To learn more about Carolina Tiger Rescue or schedule a visit, go to http://www.carolinatigerrescue.org/.