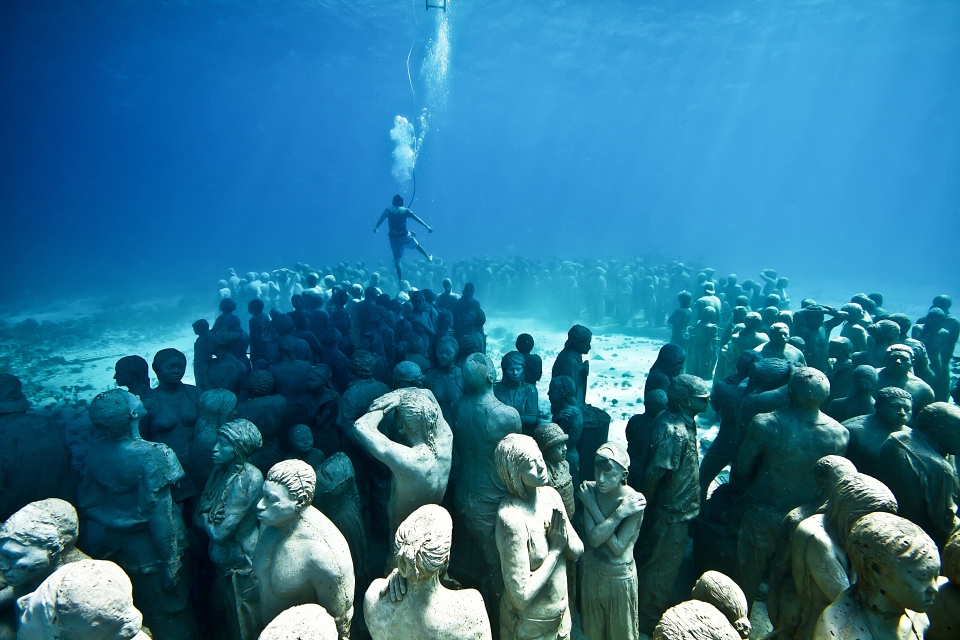 It is about a series of art installations by artist Jason DeCaires Taylor, who has been making underwater sculptures that double as artificial reef habitat off the Mesoamerican barrier reef (see video for more information). According to Taylor’s website, the sculptures are created from a pH-neutral cement and are designed to promote coral growth and last for hundreds of years (http://www.underwatersculpture.com/about/overview/). His photos certainly look impressive, with fouling organisms completely encrusting the statues. The photo below shows the progression of Taylor’s underwater art through time, from the model he used for the statue to the installed statue with living additions.

This same story has been picked up by National Geographic and he has given a TED talk that can be viewed here.

But – you might be wondering – is this too good to be true? Are artificial reefs really as “good” as natural reefs? What are the wider social effects of an art installation like this? Great questions. Of course, to fully and properly answer these questions, social and natural scientists would need to study this system and others like it. However, in their review of the literature on artificial reefs, Bohnsack and Sutherland (1985) summarize how artificial reefs compare to natural reefs:

More recent studies have found that: From the findings above, it is clear that artificial reefs can have unintended consequences (legal liability, exclusion of gear types, redistribution of tourism dollars) but do (at least) seem to have strong ecological benefits and potentially lucrative economic benefits for local fishers and the tourism industry. So, are Jason DeCaires Taylor’s sculptures as cool as they sound? The answer to such questions is always uncertain, particularly since it is unclear what the broader effects are of having a British artist install large-scale art in other countries. But – if the case of his art installation is comparable to the literature on artificial reefs, the answer is, “probably yes!” His sculpture garden (which is very vertical with lots of structural complexity) is probably attracting fish, recruiting a similar biotic community as natural reefs, and bringing in more tourist dollars to the area. Note: all photos in this blog are from Jason DeCaires Taylor’s website, which has more information about his sculptures: http://www.underwatersculpture.com/sculptures/the-silent-evolution/.