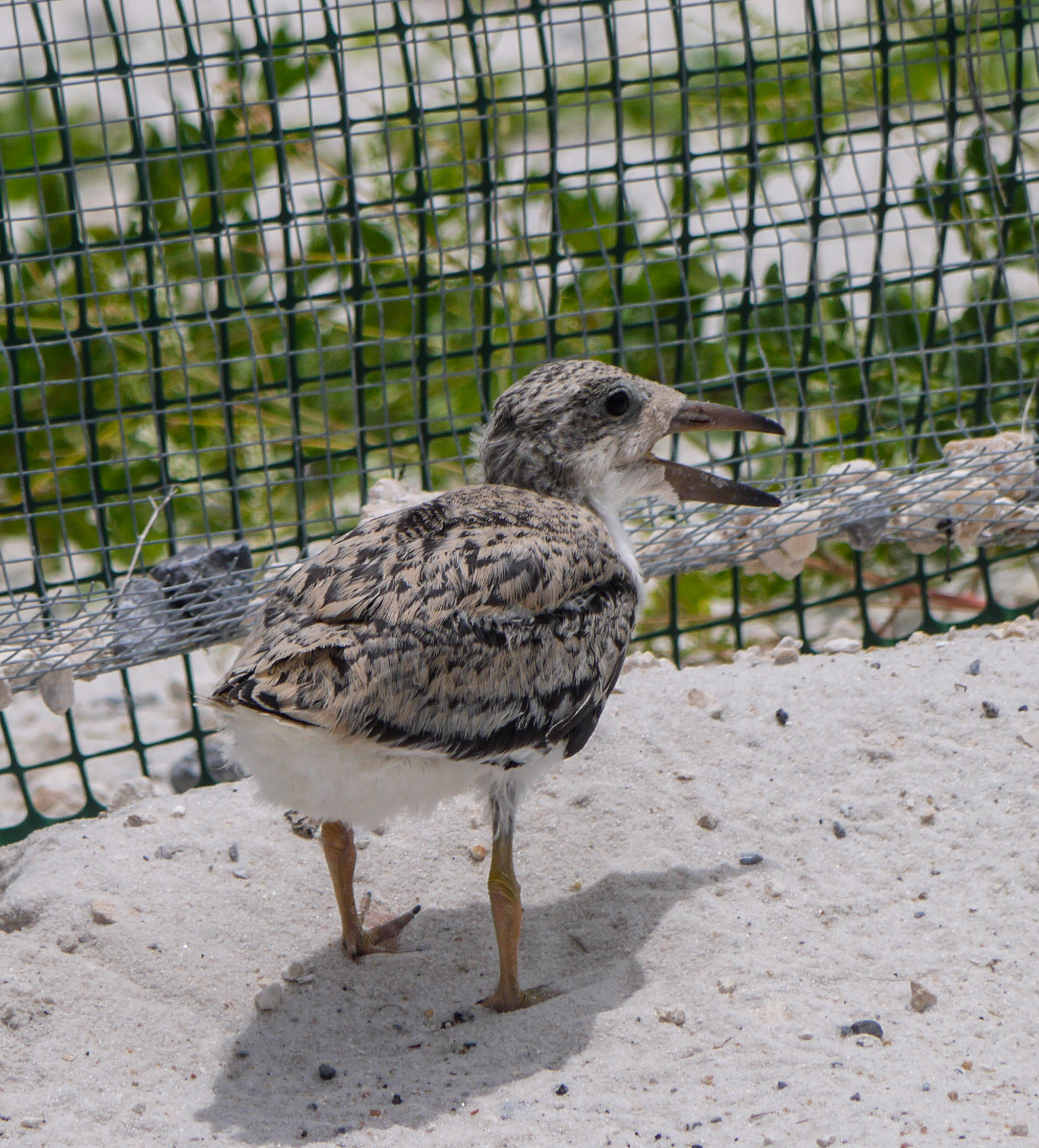 Their nesting location may seem a little odd at first glance. On the rocky, sandy sides of the Navarre Bridge we found dozens and dozens of birds laying on the ground or looking after their fuzzy chicks. They were cut off from the road by a mesh fence, but only a few feet away cars were zooming by on their way to Navarre Beach or back to the mainland. It was noisy and hot; hardly ideal conditions for raising babies weighing less than a few ounces.

Least Terns, the smallest members of the tern family, used to nest on sand beaches and dunes – now prime territory for summer tourists, condos, dog walkers, and other nest-disturbing activity. Black Skimmers prefer the same type of nest habitat, and nest in colonies of other birds – including Least Terns. They are much larger however, and feed on fish by skimming low over the water.

However, as these birds slowly lost their prime nesting habitat they have become more creative. In addition to the rocky and sandy sides of bridges, they have also been known to nest on the gravel roofs of buildings. In fact, multiple studies have found that terns have greater success on top of rooftops than on the sand!

Of course, the moment I heard about this nesting colony I knew I had to check it out. We headed onto the bridge, slowing down upon spotting the tell-tale nesting signs. There was a wide shoulder, and my husband and I pulled off, bringing our cameras and binoculars.

As aforementioned, summer in Florida is hot. Heat radiated off the pavement and the sun’s glare off the water was so bright my sunglasses barely provided protection. Still, in a few moments I forgot all discomfort, because a young Least Tern stumbled out from behind some low grasses.

They are tiny! Half the size of my palm, they all scurried around together. It was impossible to tell which chicks belonged to which parents except when a mother or father landed to feed its own young. When not feeding, a group took shelter in the shade of a cement wall, forming the world’s most adorable line.

The Black Skimmer chicks were much larger, but also a lot fuzzier. One adventurous youngster had found his way to the other side of the fence, in danger of running into the road. A parent was following close behind, guarding the chick until it decided to slip back under the fence once more.

Both Least Terns and Black Skimmers are on Florida’s list of threatened and endangered species. Though they are successfully nesting on Navarre Bridge, they are not so successful elsewhere. To protect their health, people should alert wildlife officials when nests are spotted so that they can be marked. Keep dogs on leashes on the beach, and watch your step. If you are so lucky to spot a chick, enjoy it. They are full of life!

One thought on “Protecting Tern and Skimmer Chicks”