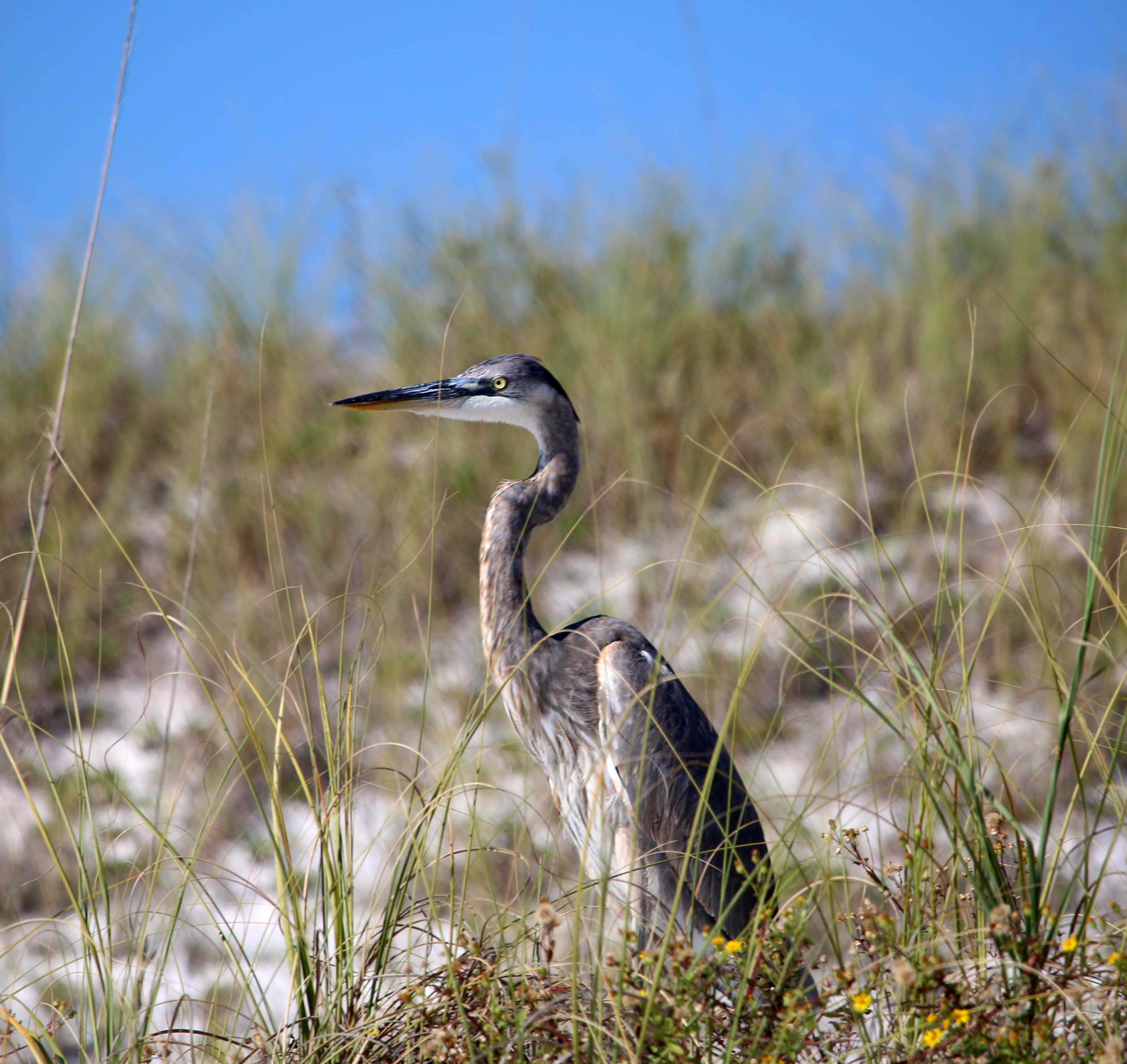 I’ve read many articles about the plastic floating and/or dumped into oceans around the world. Nat Geo published an article in February about the eight million tons of plastic that ends up in the oceans every year, Forbes reports that there are currently 5.25 trillion pieces of trash in the world’s oceans, and the Duke Nicholas School’s Bill Schlesinger writes that, “Worldwide production of plastics approaches 300 million tons per year, and a recent estimate suggests that 4.8 to 12.7 million tons reaches the sea.” Yet, it was a personal encounter with a Great Blue Heron that really drove home what we are doing to our ocean and coastal creatures. The Gulf Islands National Seashore, Fort Pickens Area, is one of my favorite places to visit on the Florida Panhandle. I usually get there by boat, hopping off onto the bright white sand beaches, bordered by dunes. In mid-October, I walked the beach with Heather, a second year CEM at the Duke Nicholas School, who is working on her master’s project with me.

We saw the Great Blue Heron from a ways off, not surprising considering they stand between 38 and 54 inches and are one of the tallest birds in the United States. Their range extends across North America, and they are found in Florida all year round. This particular Great Blue Heron appeared to have a small fish in its bill, though it was not swallowing. Both Heather and I had binoculars with us, and we immediately noticed that the fish had a distinctive silhouette.

“That really looks like a shark,” Heather pointed out, though we both found that hard to believe.

As we approached, the heron still didn’t try to swallow its prey. Instead, it dropped the fish/shark in the waves, picked it up again, walked across the sand, dropped it once more. What in the world was going on?

Eventually the heron flew off, perching atop one of the sea oat-covered dunes to watch us. Heather and I rushed over to where we had last seen the little fish/shark. It turns out that Heather had been partially right: the heron had picked up a small plastic shark, a child’s toy. We had been completely fooled, as had the Great Blue Heron it seemed.

I wonder what would have happened had we not come across the bird. Would it eventually have gulped down the toy, damaging its digestive system or interfering with its feeding habits? Would the plastic shark have been picked up by another species? Taken by the currents to the deep ocean? It’s impossible to know, but at the very least the heron had wasted time and energy on the toy; in the wild the difference between death and survival can be razor thin, and any such waste is bad for the animal.

Ingestion of plastic by wildlife – birds in particular – is just one of the many problems associated with pollution in our oceans. Given that up to 90% of seabirds have plastic in their guts, in all likelihood our coastal heron (though not a seabird) could have had plastic within its body too.

A lot! The Natural Resources Defense Council lists strategic as well as individual actions to combat plastic pollution in the ocean, including cutting out disposable plastics, cleaning beaches, and recycling. Read more here!