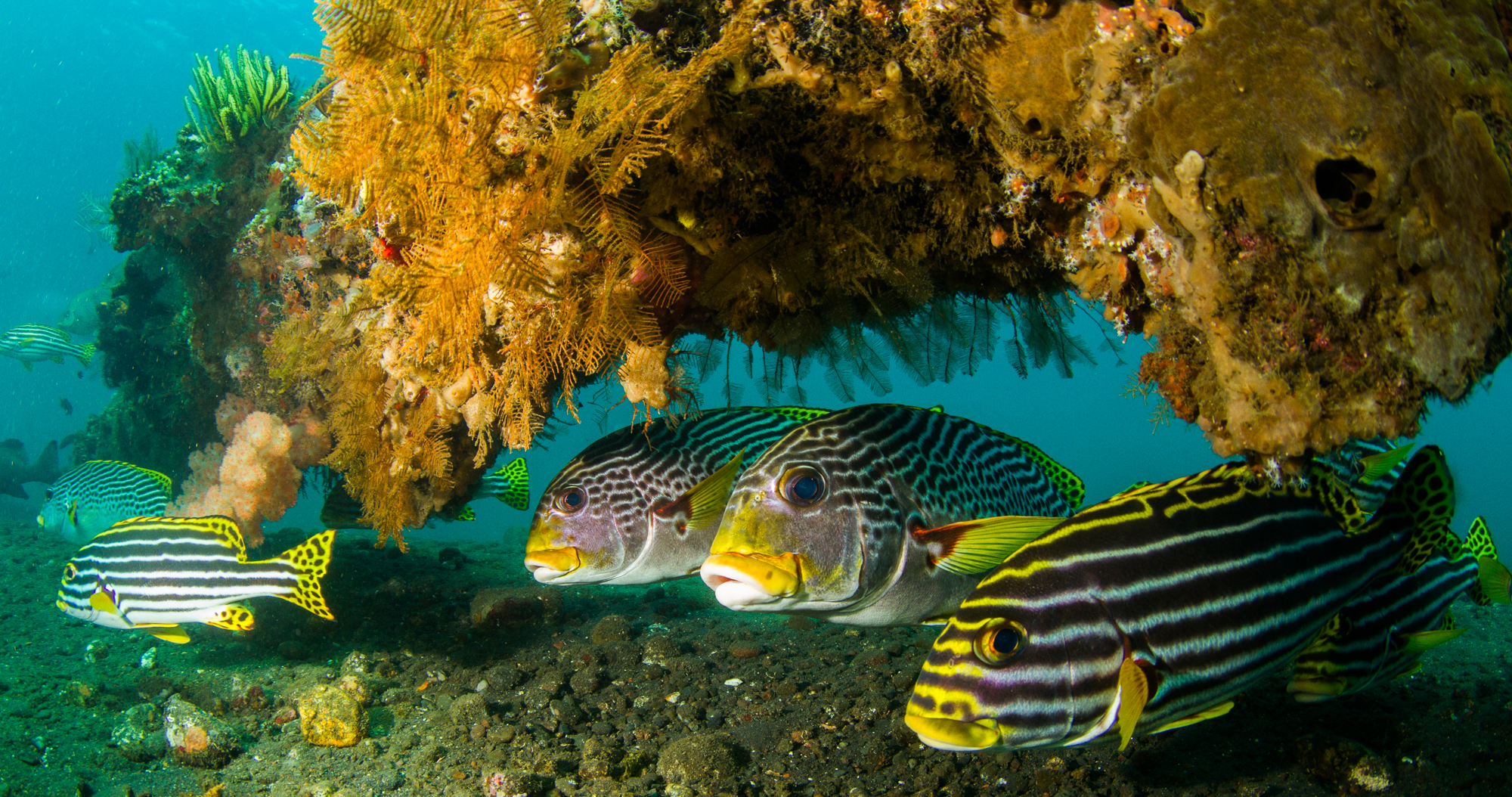 Picture yourself exploring the largest Muslim country on Earth. Does your mind wander through scenes of sand dunes and camels, or crowded markets with burqa and tunic clad people? Can you almost hear the Imams calling the faithful to prayer from their lofty minarets? Is it crystalized in your mind? Have you got it? Now did your mental Odyssey take you to the coral isles of Indonesia? Probably not! The biggest muslim country on earth is full of forests and reefs rather than dunes and deserts. Many are shocked to find that Indonesia, despite its low profile in the news, is not only the largest muslim nation but also the fourth most populous country on earth. The vast archipelago of over a thousand islands that stretches from Malaysia down and around the bend, all the way to Papua New Guinea and Australia, rarely makes headlines. If you asked most people to point out Java or Sumatra, Kalimantan or Sulawesi on a map you might get some pretty fun responses.

Indonesia is an incredible country whose human and natural biodiversity mirror one another. While the Indonesian people are predominantly Muslim, the island I chose to explore on this my fourth visit is a bit of a cultural outlier: Bali The people and aesthetics of Bali stand rather apart as the only island in the archipelago to be predominantly Hindu. Indonesia has long been a sea corridor of trade and human migration. As the rest of Indonesia converted to Islam or was conquered by people who had already done so, Bali somehow remained connected to its Hindu roots, established through trade and migration from distant India. In relative isolation, Hinduism blended with aspects of local animist religions to produce a beautiful and complex set of traditions (which are beyond the scope of my blog to discuss). But on first setting foot in Bali, one is immediately aware that something different is going on – alerted by the sweet aromas of incense burning from small offerings, as well as the exquisite architecture throughout the island. Bali is the tourist capital of Indonesia, and many visitors come for the cultural and spiritual offerings of Ubud (made particularly famous by the book and movie Eat, Pray, Love) or the surfing, beaches, and parties of the island’s Southern reaches. Still others (like me) come for the wonders of life beneath the sea. Though perhaps not the best diving in all of Indonesia, Bali provides arguably the most accessible entry point to the wonders of “the coral triangle.” This region, hemmed in by the Philippines, Papua New Guinea and Indonesia, is where coral reefs really got started. Because coral and coral reef fish first evolved here, they have now reached a truly kaleidoscopic diversity. The deeply hospitable and safe atmosphere of Bali (there are almost no police outside the large cities because they just don’t need them) – and its affordability – make it a perfect place to come get dive certified and explore the depths. Despite the blitz on wild-caught clownfish generated by their animated fame, one can still find “Nemo” on most of the reefs around Bali. Their populations in many places are rebounding since aquaculture has mastered production of these fish in captivity, often providing alternative non-extractive means for local people to make money from their marine bounty (more on this in a future post!). One of the better known dive sites to visit is the wreck of the USAT Liberty, an American Army cargo ship sunk off the northeast coast of Bali by a Japanese sub during WWII. Even a beginner diver can easily cruise through the bowels of the ship now festooned with the living decorations of the ocean: sponges, fan corals and moray eels. As is so often the case in life, in diving it is the little things that count and nowhere more so than in Indonesia. There is an old rhyme my father taught me:

on their backs to bite ‘em,

and so ad infinitum”

(This rhyme incidentally appeared on my high school AP Biotest to raise questions about symbiosis.)  If you ever want your mind blown by the intricacies of nature, flip through an Indo-Pacific invertebrate book and look and at the hundreds of tiny little critters that live their entire lives on the back of an anemone or sea star or urchin. When you stop and look close and small, the stacking of life on life on life is mind-blowing here. In many places it is a rare treat to stumble on a symbiotic anemone shrimp which, like the clown fish, makes its home amongst the typically stinging cells of the anemone. It receives shelter and protection in exchange for cleaning and helping to feed the anemone (although shrimp poop may not be our idea of a good meal, it is rather nutritious!). On this “party-green” anemone (as my dive guide called it) one could  find not just one such species of shrimp but a second that specializes just on living on the mantle or fleshy-stalk of the anemone! This shrimp lives its whole life just on this one single strand of whip coral! But in the land of invertebrates, surely the Peacock Mantis Shrimp is king!

I will save a full explanation for other sources but let me just give you some highlights of this feisty little critter. Whereas all the colors we see are created by three different types of chromatophores or color-sensitive cells in our eyes, mantis shrimps have sixteen. While we can only detect polarization of light in one direction (and if we wear polarized sunnies and tilt our head side to side like a crazy person), they can detect the degree of polarization of light reflecting off any object and its 360 degree orientation. While we have bifocal vision, they have compound eyes with exa-focal vision. And while we can punch something with varying degrees of force, they can lash out with the force of a .22 caliber handgun. They do so with such speed that a cavitation bubble forms and, as the water rushes back into the super-low pressure area formed, it creates light, sound, and heat that at a tiny little point reaches 5,000 degrees Kelvin (i.e. the temperature of the surface of the sun)!

Turning to somewhat gloomier subjects though, part of why it becomes so important to focus on the little things in Indonesia, is that most of the big stuff has been eaten. The reality of 300 million people in a developing island nation is that people need food, and they fish for a lot of it. Unfortunately the only shark I saw in my time there was this one that a fisherman from Lombok had caught off the reef on which I was diving. Even the little stuff is imperiled. Beyond the global stressors of ocean acidification slowing rates of coral growth everywhere and global warming causing bleaching events, fishing on the reef and terrestrial run-off from deforested and overpopulated landscapes threaten algal take-overs. And the effects of litter can be serious – especially plastic which not only snags and smothers coral heads but breaks down to plastics which may be affecting the very plankton at the base of ocean food chains. Nonetheless the reef creatures persist and even the trashiest of spots have hidden gems. The people of Bali definitely have a different ethic where it comes to litter than I’ve seen elsewhere in Indonesia. I tend to believe their claims that the trash on the beach mostly washes over from nearby Java, but waste disposal is far from perfect. There is, however, a sense of pride amongst most Balinese for the beauty of their island and it is further bolstered by the tourism industry’s insistence on clean beaches and streets.

Moreover, cyanide and dynamite fishing, so common in many other parts of Indonesia, is quite rare in Bali.

Also encouraging for the future of the bigger creature of Bali and Indonesia at large is that both local communities and the government have shown great interest in working with groups like Conservation International, The Nature Conservancy and World Wildlife Fund to establish both terrestrial and Marine Protected areas. See for example the Coral Triangle Initiative. Menjangen island off the northwest coast of Bali has been made a national park. Despite struggling with some degree of ongoing poaching, the island boasts visits from Whale Sharks and Manta Rays.

There’s definitely hope in the future of Indonesian conservation and sustainable development. It’s easier to see and feel the hope in a part of the country like Bali, with a comparatively small and prosperous population combined with booming tourism. The scene is more complex in regions like Java and Kalimantan. Nonetheless, the Indonesian government has been getting quite serious about its involvement in conservation and the people even in remote villages are often excited by the prospect of  conservation projects and the novel opportunities for livelihoods they may represent.

As ever, if you’re interested in visiting  Indonesia – or Bali especially – for conservation work or play, feel free to contact me and I’m happy to share what I may know.