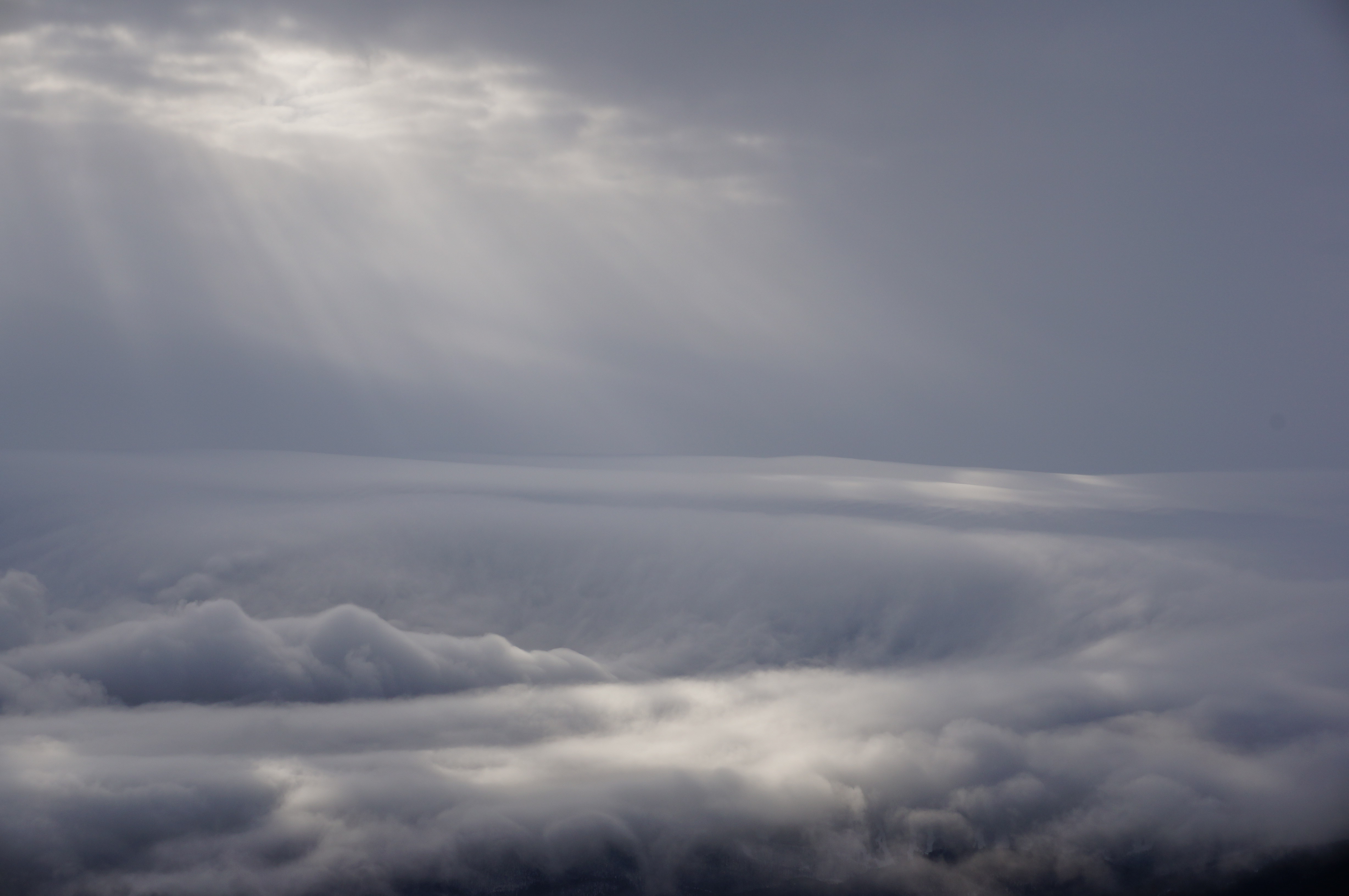 I knew I was in trouble almost as soon as I laid down.  I was trying to sleep on a ridgeline, but it was too cold.

January. Wrapped in a sleeping bag and tarp; I began to shiver on top of the snow.

This is how people die, I thought.

I lay there another minute, not wanting to give up on the goal. The shivering did not stop.

I got up, unwrapped, packed up my gear, and walked out six hours in the dark. The Presidential Range has seven main peaks, all over 4,000 feet tall.

A traverse of the Presidential Range is 23 miles long, with 9,000 feet of elevation gain (and loss), or 900 flights of stairs.

The most famous mountain in the Presidential Range is Mount Washington, which brags that it is home to the “worst weather in the world.”

My friend and fellow winter Traverse-luster, Jeff, did me a huge solid and picked me up at the parking lot of the Great Gulf Wilderness after I spent six hours walking out of it when a tarp and sleeping bag were not enough.

Jeff grew up in Berlin, New Hampshire, in the shadow of the Presidential Range. We had tried and failed together to winter traverse on three previous occasions before I headed out alone.

Each previous failure could broadly be attributed to a lack of planning. I thought I had planned enough this time, but there I was walking out before I had planned to, like the three other times. After failing twice in the winter, Jeff and I walked the traverse together one summer to better wrap our heads around the route.

Still, it hadn’t been enough either.

It was in my last winter in Boston and I had started looking for weekends near full moons – I knew if I was going to do it, I would need the light.

As the weather window began to align around February, I set plans in motion to get things ready. I would need more planning and more help. I adjusted my sleep cycle, waking up an hour earlier each day, until I hit 4 a.m. on Friday, so I could wake up at 3 a.m. on Saturday. I front-loaded my food intake.

Clayton, who was then a ski coaching friend, called to offer a hotel room floor to stay on, and to pick me up when I was done.

I got a friend who would be up partying on the West Coast to give me a call at 3 a.m. East Coast time to help make sure I would get up.

I set up time goals for each mountain, so that I would know how much progress I was making. Assumed timing of 1.3 miles an hour, building in an hour in for contingencies. The crux was get back to the trees before darkness. It is easy enough to follow a well-defined trail with the full moon in the snow.

Previous times, I had carried camping gear, in case I had had to bed down for the night. This time, however, I committed to walking only, no camping, which significantly lightened my load.

It can be harder to do two things well rather than one thing successfully. I was on the trail by 3:30 a.m., snowpants swishing, trekking poles clacking in the otherwise still woods.

The light comes up, an older guy comes down the trail.

“Where are you going?”

“Crawford Notch [the end of the traverse].”

I nod and keep walking.

By the time I have made it to the top of Adams (peak number 2), dawn has begun to gird Madison (peak number 1) in pink. The pink is reflected from the snow to the clouds and back.

No wind, temps in the 20s, perfect underfoot conditions, miles of visibility.

The visibility reveals the beginning of a front that I had known was coming.

Something about little cat’s feet right?

Onto Thunderstorm Junction, turn around and bailout from times past. A familiar place, but I am lost.

I walk along a cliff edge. The way is not down there.

I look up at Mount Jefferson (peak number 3). It seems that there are three hikers directly above me. Not sure where they came from. No one else should really be in front of me at this point.

Making the Jefferson summit push, I see the three guys up ahead of me again.

As I close in on the summit, the front really settles in, and I don’t see them again. Not sure where they went.

After the summit, I walk along the ridgeline, past the spot where I tried to sleep in the tarp out of the wind.

Visibility allows only three cairns at a time. It’s my first backside winter approach of Mt. Washington (the tallest in the range). I had only previously done this route in the summer. It’s 11:30 a.m.

This is finally happening. Maybe.

Fortunately, I built an hour into the schedule for a reason.

All of a sudden, near the top of Washington, it’s really crowded.

Perhaps 20 people all told in various states  of excitement around the summit. It’s 12:15 p.m.

“I had no idea a trail came up from that way!” someone says.

The guys I saw at Jefferson are nowhere to be found.

And I am late.

I find the Crawford Trail on the other side of the summit, and I’m instantly alone again.

I am committed now. I just have to keep pushing, one foot in front of the other.

About 89% of the vertical and 55% of the distance is behind me now, but it has also made me pretty tired.

I can always focus on this one step, though. The trail drops off the ridge. Or maybe it doesn’t. I can’t really tell.

I lost the cairns and the viz is awful and now I have no idea where the trail continues.

I hear voices –female, at least one, and start to walk towards it. I pause – it seems to be coming from the other direction.

They will come to me eventually, I reckon. But, they never do. It will be hours and miles before I see anyone else.

I self-arrest down an ice field to get back to the trail, tweaking my shoulder in the process.

I stumble forward, and then I’m there, Lakes of the Clouds Hut, another major milestone.

I fall several times. I feel like there’s something there.

My friend Hillary used to tell stories about haunted huts. She used to work as a hut caretaker.

I need to keep moving, it feels almost as if something caused those falls.

Monroe is next. I am late. Treacherous footing, the wind has finally kicked up.

It is not getting lighter out.

Quicker winds now carry sleet – throwing it directly into my face. Turning towards the wind, my sleeves flap behind.

I lose the trail on the way down.

I manage to pick it up after plunging my thighs into the snow.

The depth of the snow gives pause. I really have to think about keeping on. To want it to keep going.

I meet two others. They are planning to do the traverse over two nights.

I’m struggling to hear them over what must be 35 mph wind.

I have no desire to sleep above tree line tonight and bid them luck.

The trail is narrow and the drop-offs are near and steep. Low visibility does not help. The gloom gathers all about as I trudge over Pierce (last peak).

It’s really difficult to find the will or the energy to keep moving, but the hard stuff is behind me now.

Some people have camped right in the middle of the trail. I slide around them.

TREES. TIME TO START HEADING DOWN.

I feel like I’m gliding through the trees – mostly out of joy, partially because I’m so empty.

The snow starts to carry all the light in space.

My earlier suspicions of hallucinations are quite apparent now.

Alternately, I see several spots all about, like you do after rubbing your eyes. Or I feel like I am in a conversation with the devil, who is chasing me from the mountaintops.

The woods are lovely, dark and deep.

The slow race against the dark is finally lost, near the trailhead.

The moon, which would help, is shrouded.

The moon’s reflections, though, light the world from the ground. It is enough to see by.

Finally, I reach the Crawford Hut, the end.

I can stop walking.

I go inside to call Clayton to let him know I am done and down and ready to fall asleep on the floor, if he can still come get me.

Everyone inside is staring at me. Probably not for any good reasons.

I am so pumped to see Clayton when he arrives. He is super stoked too.

He asks me about my day.

I try to tell him, but how could I?

One thought on “Planning and Friends Make a Difference”