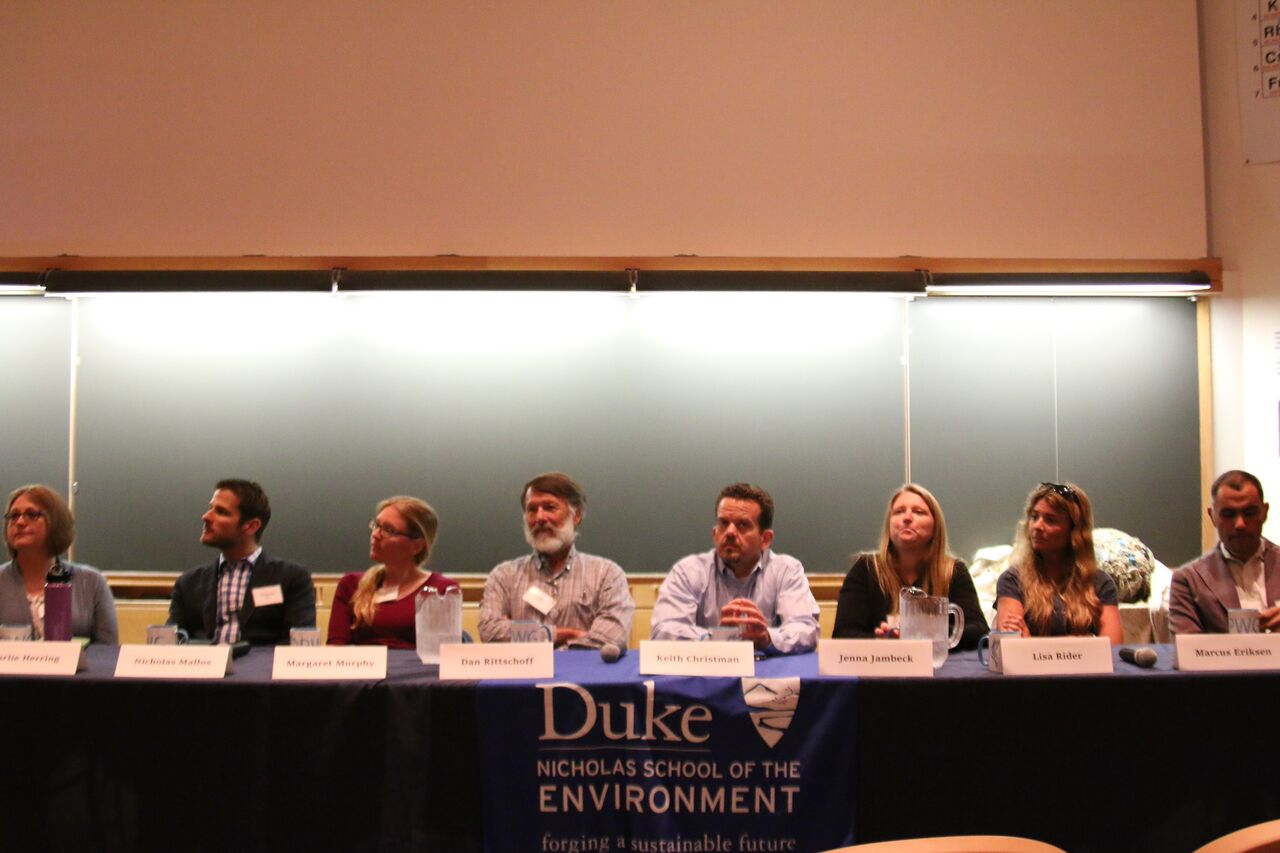 There’s no questioning that marine debris has quickly become one of the largest global emerging threats facing the world’s oceans. A quick walk on the beach or dip in the ocean can reveal anything from an old potato chip bag, a straw, a cigarette butt, or just about any other type of trash that you can imagine.

Marine debris is extremely difficult to track and quantify, but many studies are working to assess the extent of the issue. A 2015 landmark paper published in “Science,” for example, found that a harrowing 275 million metric tons entered the oceans in 2010 alone.

Both the magnitude and uncertainty of marine debris is why the Nicholas School’s Ocean Policy Working Group decided to host its annual spring symposium on marine debris earlier this month. The symposium, “Talking Trash: Confronting the Challenge of Marine Debris,” drew a rock-star panel of marine debris experts to speak about the issue, their work, and possible solutions, including Jenna Jambeck, lead author of the aforementioned Science study and assistant professor at the University of Georgia; Nick Mallos, Director of Trash Free Seas at The Ocean Conservancy and also a Nicholas School MEM alum; Markus Erikson, Director of 5 Gyres, and many more (a full list of speakers can be viewed here).

Even with speakers from such different backgrounds, including industry, academia, government, and NGOs, they all agreed that marine debris is a serious issue that needs to be tackled from a variety of angles, and that it fortunately is a bipartisan issue—meaning swift action isn’t impossible. Just this past winter, for example, the U.S. made tremendous progress towards reducing input of microbeads into aquatic environments (the little plastic balls in your toothpaste or body wash) after both the House and the Senate passed the Microbead-Free Waters Act at lightning speed.

The day-long symposium ended with the speakers providing recommendations on the issue; at the policy level, most suggested that if they could implement one policy, it would be a state/national recycling standard or requirement that recycling bins be present next to all public trash cans. At the individual level, all commented that on-the-ground education and an awareness of where plastic waste goes is the best way to eliminate single-use items and other plastics that ultimately make their way into ocean ecosystems.

The Symposium was a tremendous success and ultimate capstone event to conclude the academic year, but it’s just one of many events that OPWG held. We also hosted monthly coffee talks and lunches with marine science and policy experts around the Triangle area, as well as information sessions about marine-related job opportunities and our annual networking event, Coastal Conversations, where students have the chance to meet with a panel of alumni. This year marked the first year that Coastal Conversations was held in Charleston rather than DC, and was a fun event for all involved.

When I came to the Nicholas School, the idea of a “club” in graduate school initially felt quite silly and off to me. But, after a year leading OPWG with several other talented classmates (including fellow CEM, Justin Pearce, who led the Symposium), I can safely say that my experience with OPWG has undoubtedly shaped my first year at the Nicholas School. It’s been much more than a club, and instead has been a vehicle for staying current on ocean issues, networking in the field, and connecting with faculty and staff at the Nicholas School that I otherwise wouldn’t have met. As this year comes to a close, I encourage all incoming students to find their niche organization—OPWG or other—that lets them explore their passion.

On behalf of OPWG, I’d like to thank all of the speakers that joined us at the “Talking Trash” Symposium, as well as the Duke Graduate and Professional Student Council, the Duke University Center for International Studies, and the Nicholas School of the Environment for their event assistance.