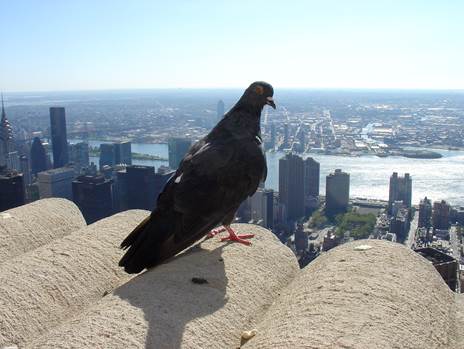 Every city has a vibe that makes it unique in the world. Vibrant New Orleans, at the mouth of the Mississippi. Hip Seattle, between the Cascades and the Pacific Ocean. Romantic Paris, straddling the Seine and nestled in the forests of Île-de-France. Each has its own distinctive culture and setting.

But think about the kinds of animals you see in cities; for example, pigeons, raccoons, crows, and rats. People maintain grassy lawns and oak trees line shady streets of suburban neighborhoods, even where these plants aren’t native. This tendency for collection animals and plants in cities in very different areas is termed “biotic homogenization.”

For organisms living in cities, the combination of introduced species along with stresses such as noise, urban heat islands, roadkill, or pollutants can make life hard for some species. On the other hand, urbanization creates opportunities like new food resources (garbage and gardens), construction (that can open up habitat for plants), and increased nutrient availability, favoring those organisms that can adapt to or even exploit these novel conditions. This acts as a sort of filter by letting through the set of species that do well in urban areas while excluding those that can’t tolerate the unique living conditions in cities. Urbanization therefore leads to a similar biological community in cities throughout the world.

But the sameness gets even more striking than that: compare these aerial photos. One of them is a neighborhood in greater Phoenix, in the middle of the Sonoran desert, and one is from greater Miami, abutting the subtropical Everglades.

I don’t know about you, but I find it near impossible to be sure which is which, but I’m pretty sure I would be able to tell the difference between a photo of the Sonoran desert and the Everglades.
It seems pretty obvious to say that humans make significant modifications to the landscape in cities. What may be less obvious, though, is that the combination of all of these modifications results in a similar configuration across cities.

One example of this is shown in a recent paper by Meredith Steele and co-authors, in which they compare the abundance of and area occupied by streams and rivers in 100 cities throughout the United States. They show that the abundance and characteristics of surface water in cities throughout the United States tend to converge, becoming more similar among cities as compared to their environs. Specifically, cities located in dry climates have more water bodies than the surrounding landscape (think of the lakes in the city of Phoenix vs. the dry expanse of the surrounding desert), while cities located in wet climates have less surface water than their surrounding environments (e.g. the lakes in suburban Miami vs. the Everglades, an expansive wetland). Simply put, the characteristics of cities in vastly different settings converge in part because cities in wet areas become drier while cities in dry areas are wetter.

This pattern comes about in part because we tend to build cities in places that are already more alike (i.e. desert cities are built in the relatively wetter parts of the landscape), but also because humans intentionally modify the landscape to suit our needs and desires. In Miami, we dig lakes to raise up the land and lower the water table so we have dry land on which to build. In Phoenix, we build lakes because we like to have water around for recreation and to help modulate the extreme temperature swings of the desert.

With more than half of the world’s population now living in cities, it is important for us to continue to understand how urbanization works within any given city, among many cities, and in relation to their surrounding landscapes.