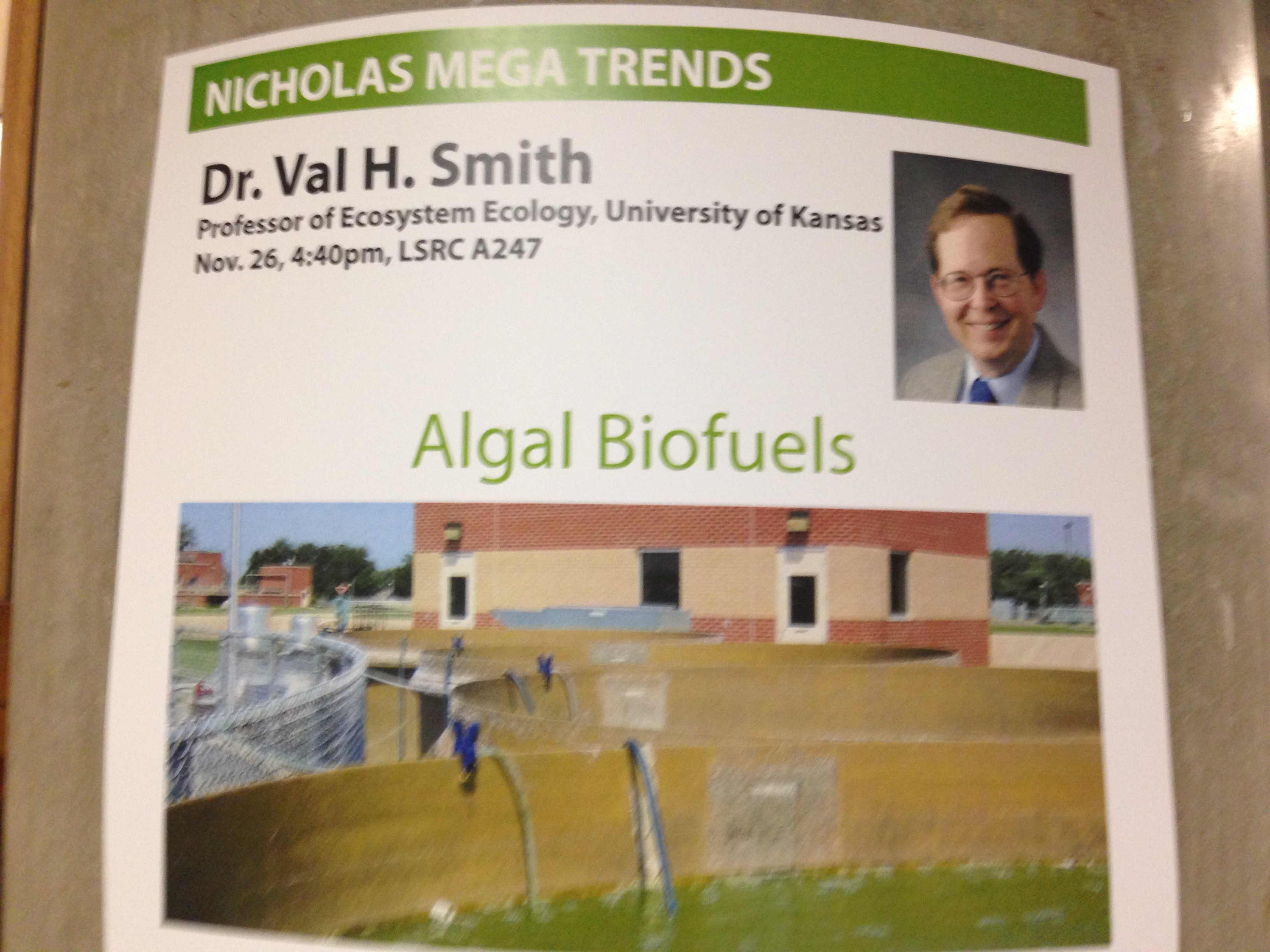 Mass-production of algae often occurs in outdoor raceway ponds (photo). When algae are grown outdoors for extended periods of time, they’re vulnerable to having some unwelcome company. Algae-eating grazers such as zooplankton can be carried into the raceway ponds by wind or by organisms like insects and birds. These grazers, or “microscopic cows” as Val Smith referred to them, can deplete the algae population within days or hours (ref). What sustainable options are there for solving this biological contamination problem? University of Kansas researchers have been experimenting with a strategy no others have yet.

As an invited speaker for the Nicholas School’s Mega Trends course, Dr. Val Smith of the University of Kansas gave a public seminar last week titled “The Ecology of Algal Biodiesel Production” (Watch it here – Duke netID required). Because of similar research interests, I was very excited to hear Val’s opinions about growing algae, as well as his outlook for algal biofuels. He said he felt much more optimistic about algal biofuels’ potential after attending the Algae Biomass Summit this fall (mentioned in a previous post), and he thinks the most pertinent step in algae biofuel production is cultivation (growing the biofuel feedstock). Fittingly, Val’s role in the Feedstock to Tailpipe Initiative at the University of Kansas is ecological research in algae cultivation.

Val’s method for reducing predators in algae reactors is relevant to the ecological concept of top-down control. Top-down control means that predators at the top of the food chain control population densities of prey at the bottom of the food chain. He advocates adding fish to the algae reactors so that they’ll eat grazers that feed on algae. When fish consume these “microscopic cows,” such as zooplankton, there are less zooplankton to eat the algae, and thus more algae can grow. Val and collaborators in the Environmental Engineering department tested the top-down control strategy in outdoor pond reactors using wastewater as a growth medium (article). Reactors with fish had greater algae growth than reactors with no fish, and the fishless reactors also had more zooplankton.

Using fish and other natural methods could reduce the need for adding chemical biocides. Although not discussed by Val, researchers have been studying other natural methods of controlling biological contaminants. One such method is the production of allelochemicals by the algae themselves. An ‘allelochemical’ is a substance produced by an organism that is harmful to other organisms. For example, cyanobacteria can produce cyanotoxins that reduce concentrations of zooplankton and competing algae (and are deadly for organisms in the natural environment too). Growing the algae in certain conditions that predators may not tolerate is another option (e.g, high salt, low pH) (ref).

Growing algae in enclosed photobioreactors could also eliminate the contamination problem because predators from the environment do not have access to the algae culture. However, photobioreactors are currently more costly than raceway ponds. Reactor design is a substantial area of active research in algal biofuels, though, and with technological advancements it is possible that photobioreactors will become a viable option.

In addition to top-down control, Val also discussed the concept of polycultures: growing multiple species of algae together in a single reactor. Increasing biodiversity in the reactor can increase productivity and make the cultures more robust. Val’s talk pointed out that growing algae for biofuels relies on many previously studied ecological concepts. Using what we already know about algae ecology can help cultivate productive and resilient algae cultures that serve as viable feedstocks for biofuel production.