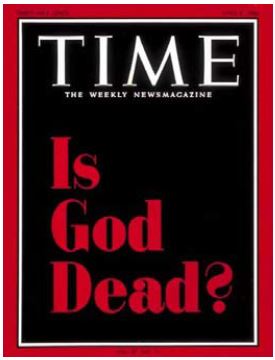 On the cover of the April 8, 1966 edition of Time Magazine was the stark red lettered question, Is God Dead? This question was posed about four years before the first Earth Day. The provocative cover article by John Elson explored the theological crisis for modern [western] thought where empirical approaches to knowing threatened to negate access to transcendence within western society. However, rather than finding the threat to be total, Elson highlighted empirics as reorienting but not denying modern approach to the transcendent, quoting Harvey Cox, of Harvard Divinity School, who proclaimed “the one area where empirical man is open to transcendence… is the future: man can be defined as the creature who hopes, who has taken responsibility for the world” (Elson 1966). The preeminent speaker of hope during this time, MLK Jr., had been friends with Cox for over six years at this point and was no doubt influential in this thought (his reflection here).

More strikingly, the push of empirics on the transcendent has now been reinterpreted as a pull. Michael Northcott suggests empirics are a contemporary gateway to the

transcendent by means of calling attention to “marks of the moral order, as well as the physical design, of the creator God who first affirmed its goodness” (1996 p.132). Northcott’s view suggests that empirics yield view of the transcendent in a modern social world which has become disenchanted. Alasdair MacIntyre, a strong influence on Northcott, is recognized as widely influential in his call for a turn to tradition, arguing tradition is what gives intelligibility to empirics. Note here that tradition is concerned with the transcendent, and today’s separate[d] sphere for tradition, e.g. religious traditions, as being at odds with the empirical is what is at issue here. The tradition of particular influence for each author is that offered by Thomas Aquinas who understood there to be different forms of knowledge proceeding from different sources. In a very basic sketch, Aquinas’s system allows the empirical to inform the view of the transcendent and the view of the transcendent to inform the empirical. MacIntyre’s suggestion seems to be that it cannot be otherwise, each being commonly embedded in tradition.

If this understanding of tradition is correct, tradition is central in the interpretation of empirically gathered data as well as the application of management decisions based on such data, e.g. conservation practice. My own blog, Faith and Ecology: A Primer for Practitioners and Pundits, is so named to encourage the link between tradition and conservation practice. Kyle Van Houtan – a 2006 Duke PhD grad and current adjunct faculty member at the Nicholas School – utilizes MacIntyre’s notion of virtue (understood through tradition) to suggest that the existence of the conservation field depends on the continued merger of empirics and tradition:

Is nature conservation a virtue or is it just good science? If it is plainly a scientific matter, then strict empiricism reigns and the environmentalists’ battle is one of scientific research, political savvy, and power (Gill 2001). Nature—which includes human communities—likely loses a battle of this kind. On the other hand, if conservation is a virtue then scientific arguments alone are insufficient and the battle visibly involves ethics and social traditions, as well as science. (Van Houtan 2006 p.1371)

Yet, acknowledging that two subjects depend on one another does not do much for actually making improvements in their mutual relations. Perhaps Van Houtan is right here to refer to the relation between empirics and tradition, once acknowledged as important, as entering into “the environmentalist’s battle”. This political struggle faced in conservation questions is on-going but has been amplified in our contemporary Anthropocene context. In After Nature, Duke Law Professor Jedediah Purdy analyzes democracy as entangled with the natural world in such a way that politics is the beginning and end of the four American environmental visions he analyzes, including providential/romantic/conservationist/ecological movements (see the review here by Katrina Forrester which Purdy recommends). This review ends powerfully:

“The real challenge of the Antropocene is… to create a politics that confronts both environmental problems and those of inequality, exclusion, and capitalism, by building the kind of mass democracy that appeals to nature have always been used to avoid”

The political reorientation of ecological praxis seems to hold promise, but democracy is a constant challenge to enact and continually requires a basis from which to reinterpret itself.

The question then should not be how religion and conservation biology can combine forces.… This might forget the ecological complaints against science and religion, which are very real and must be taken seriously. A different approach would be to cultivate the virtues conservation requires. The wisdom to know the virtues from the counterfeits that have been passed down to us requires the practical intelligence and witness of those who practice them. It is the scientists who know science best. And it is from within religious traditions where religions are most faithfully judged. Knowledge in both traditions is social and must be vigorously encouraged. People who have a foot in both a scientific and a religious tradition might be especially important here. They may see more clearly the transgressions that produce the ecological crisis. They may know more than most the virtues that conservation requires. (Van Houghton 2010 p.271)

Indeed, Pope Francis’s 2015 encyclical, Laudato Si, offers “ecological virtues” which conservation requires (Laudato Si, §88, also see this article). The encyclical is also important for modeling how to link empirics and tradition and politics and conservation. As a sample, the poetic language of the encyclical serves to reproduce tradition, such as that of the language of Francis of Assisi, while also engaging tradition within the cost-benefit political calculus of climate change in the time preceding COP21 in Paris:

“Everything is related, and we human beings are united as brothers and sisters on a wonderful pilgrimage, woven together by the love God has for each of his creatures and which unites us in fond affection with brother sun, sister moon, brother river and mother earth” (Laudato Si, §92).

Here, continuity is essential, because policies related to climate change and environmental protection cannot be altered with every change of government. Results take time and demand immediate outlays which may not produce tangible effects within any one government’s term. That is why, in the absence of pressure from the public and from civic institutions, political authorities will always be reluctant to intervene, all the more when urgent needs must be met. To take up these responsibilities and the costs they entail, politicians will inevitably clash with the mindset of short-term gain and results which dominates present-day economics and politics. But if they are courageous, they will attest to their God-given dignity and leave behind a testimony of selfless responsibility. A healthy politics is sorely needed, capable of reforming and coordinating institutions, promoting best practices and overcoming undue pressure and bureaucratic inertia. It should be added, though, that even the best mechanisms can break down when there are no worthy goals and values, or a genuine and profound humanism to serve as the basis of a noble and generous society. (Laudato Si, §181).

The reception of Pope Francis’ encyclical has been mixed, including among Catholics, which reinforces the challenge of political coordination even after acknowledgement that empirics and tradition are mutually informative. Thus, there are not simple answers to today’s problems or powerful leaders capable of implementing solutions. Rather, there is our starting point in our traditions and our shared empirical knowledge of our common ecological context. This is perhaps a good starting point.