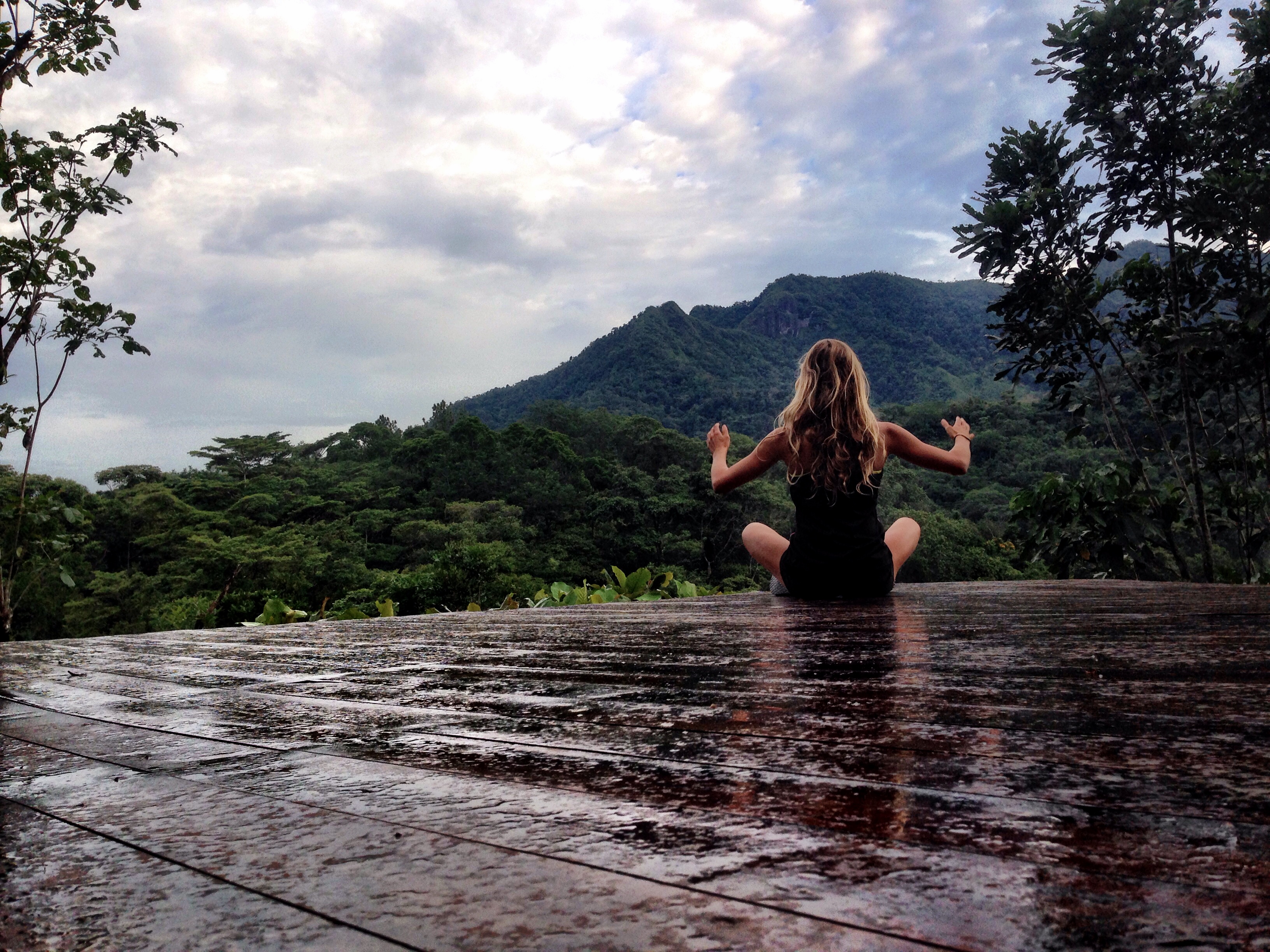 “I am sensing a storm is coming, it’s calling me out to play” – Yuna

The rainy season in Mastatal, Costa Rica is wet. Of course it is wet.

But it is not just in the rain.

You awake to the dampness of the air, slowly drifting up and out of your sleep. The humidity lacing the sky weighs softly on your eyelashes and hair. It urges you to stay curled up under the mosquito net, despite the rising sun calling you to do otherwise.

You begin to rouse yourself, and then decide to lay back into your pillow and close your eyes again. You can feel the damp of fabric of the bed beneath you. Really everything is wet here. You stretch, slowly growing aware of the forest life humming around you.

Turning over, you stumble out of bed and out to the yoga deck to watch the mist billow up from the forest in waves.

The scene is simultaneously serene and chaotic. Birds are calling, a lizard flicks out its tongue, the cows below you bellow and lumber towards the tree cover. A large toad hops away (rather heavily).

You close your eyes again and lift your face to where you know the sun is, although right now it is still a muted, pale yellow glow just beginning to light up the world.

The morning passes and the sun comes out from behind grey skies just briefly, making the tree leaves shine and the flowers silhouetted like jewels in the forest. The sunrays heat the back of your neck. You relish their warmth, and your back arches to better soak them in.

You were already sweating. Now you are sweating even more, but it runs off your shoulders and legs. It never sticks to me in the way that I am used to.

You drink water from the stream. It’s perfectly clean here you’re told, straight from the national park. You’re not sure that you believe them, but you’ve been drinking the water so far with no obvious ill effects. You take a long drink, enjoying the refreshing coolness on your tongue before screwing the lid back on your nalgene.

The forest is in fact filled with streams and tiny waterfalls. You’ve noted the large size of some of the boulders in the streambed, so you know that at some points of the year the stream becomes more of a raging river than a calming path of water cutting through the trees.

We’re transplanting tomatoes today out on the farm—working to protect their delicate stalks and finicky leaves. It’s time to plant almost everything, and we water them (well douse them really) from right below their lowest canopy of leaves. They appear to perk up a little bit, still unsure of their new home.

In the afternoon you can always expect the rain. The real rain. You can watch the storms coming in while sitting out on the deck. There are no clouds, only a single overwhelming wall of darkness that slowly descends over and through the mountains. It envelopes everything like some kind of misty grey amoeba—both threatening and inspiring at the same time. The amount of water that it holds still holds you in awe.

You watch it come and can see the way that the forest slowly turns grey. The outlines of distant tree trunks become hazy, and then disappear entirely in the torrent of rain.

It’s coming. You can feel the first drops. You grab your book and throw it inside.

You come back out and lift your arms to the sky as it begins to pour. You go back inside and towel off and munch on one of the oranges you picked from the garden that morning and watch it continue to rain and rain.

The water runs down the hillsides and shakes down the leaves and creates rivets in the streets. You love the sound that it makes on the tin roof.

The rainy season is wet.

But not everywhere. And hardly anywhere in the dry season.

In fact, water is actually a very precious resource in Costa Rica. And it is becoming increasingly so, something that was initially difficult for me to wrap my head around located in Puntarenas, and living through the rainy season.

In the height of the wet months here, you can expect quiet, misty early mornings, warm humid middays, and drenching afternoon showers. In September and October, it can sometimes rain all day every day.

Lately it has begun to rain at night as well, the water pattering on the tin roofs and filling the streets. The roads are still soggy beneath my feet on my early morning runs.

But again, the dry season is quite dry. The signs all around the farm (in the bathrooms, in the kitchen, at the sinks) all offer a single, firm reminder: “Water = life…don’t waste it”.

We wash our clothes once a week (all together) and I have a sneaky suspicion that the absence of hot water heaters is intended to drastically decrease our motivation to ever linger in the shower.

There is good reason for all of this. In 2014 the Costa Rican government announced an emergency decree for 19 cantones (sub-divisions within the provinces) located in Guanacaste, Puntarenas, and Alajuela in response to a severe drought brought on by El Niño weather conditions.[1] According to the national Meteorological Institute (NMI), the month of July was the driest it had been across the country in over 50 years. The costs of the drought were high, with the Ministry of Agriculture estimating that the agriculture and livestock sectors had lost nearly $25.7 million by the end of the year.[2] Rice and sugar cane producers, as well as cattle ranchers were among the hardest hit.

In contrast to the Pacific coast, where the struggle to obtain even potable water became increasingly difficult, the Caribbean coast and northern areas of Costa Rica during the same period experienced heavy rains, and even flooding.[3]

Unfortunately, long-term climate scenarios predict that higher precipitation levels on the Caribbean coast, and lower precipitation levels in Guanacaste and Puntarenas may become the norm. Climate modeling by the Intergovernmental Panel on Climate Change predicts that the Northwestern part of Costa Rica may see up to 25% less rainfall by 2100, bad news for an area demanding increasing amounts of water to feed new irrigation lines and commercial development.[4] Complicating matters even more, the mean temperature in Costa Rica is expected to increase by 3 degrees Fahrenheit by 2100, a shift that will inhibit the survival of even the area’s drought-resistant plants.[5]

Meanwhile, the Caribbean coast may see an increase in precipitation of up to 35-75%, damaging crops and changing ecosystems in opposite, but perhaps nearly equal ways.[6]

What does all of this mean for Costa Rica?

Climate change is coming. And with it, increasingly unpredictable weather patterns, dramatic weather events, and ecosystems and farms that are struggling to keep up.

In fact, the world as a whole is staring at these issues.

It is also time to start thinking about agriculture—how to minimize and eliminate chemical use, how to improve irrigation techniques, how to innovate and encourage people to grow crops in the environments in which they best adapt and thrive in, how to limit overgrazing and livestock and promote tree growth, how to use swales and other natural features to capture and store rainwater.

The rainy season in Mastatal is wet. Of course it is wet.

But I’m slowly realizing that it may not always be this way. And so we awake every day and try to appreciate each and every drop.

I sit and type and watch the rain come down in a deluge. I put out my hand and let it stream into my hand and flow through my fingers.

It is a beautiful world.

One thought on “Riveted by the Rainy Season”