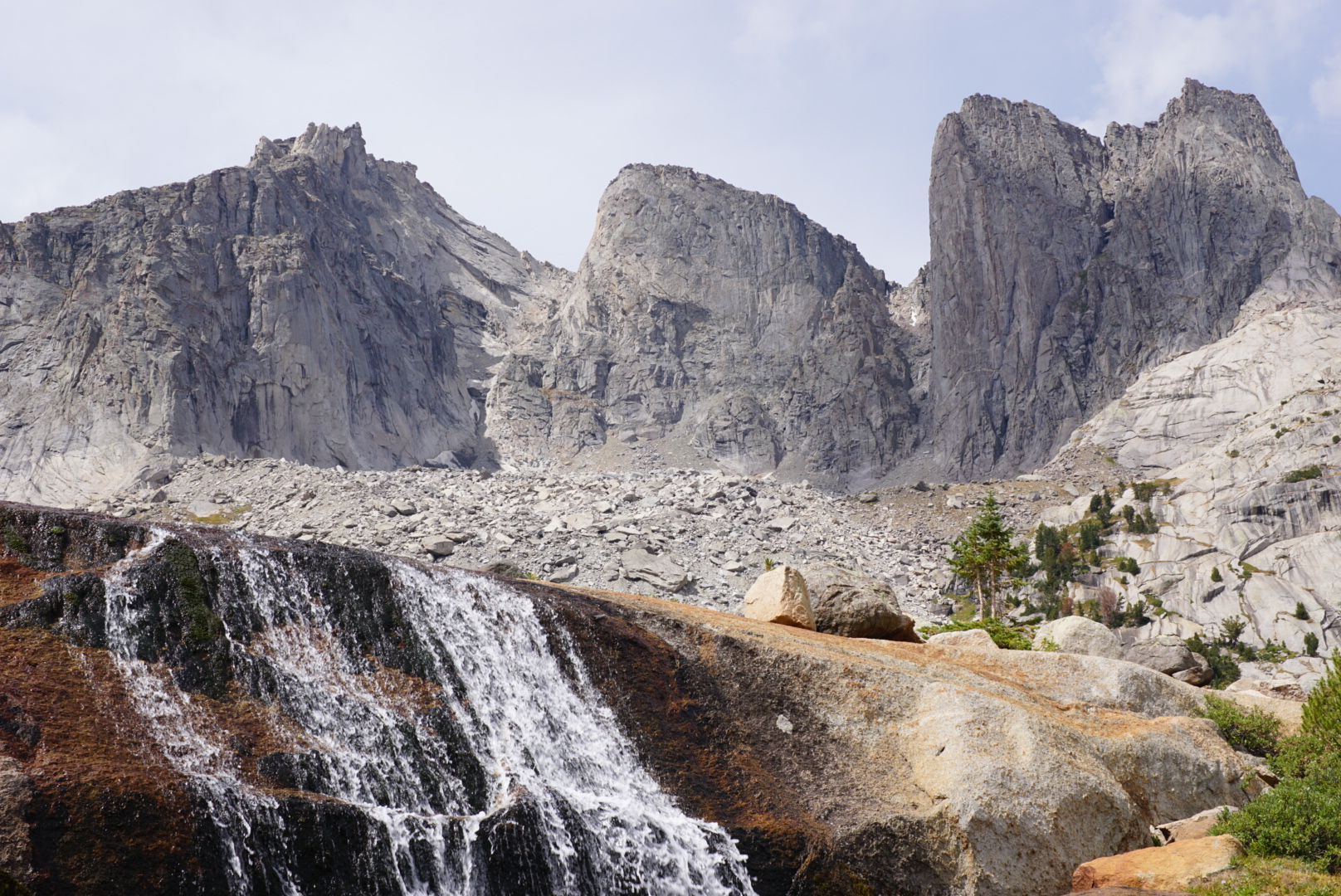 The nation has been watching the Oroville Dam for some time now with considerable unease.

On Monday, engineers shut off the water flowing out of the damaged main spillway, allowing officials to see for the first time the impaired chute that necessitated mass evacuations earlier this month. The main spillway (along with another, earthen emergency spillway) were badly eroded after nearly a week of powerful rainstorms in the area.

Repairing the main concrete spillway (in whole) is estimated to cost hundreds of millions of dollars.

The most pressing first step, however, is to clear out tons of sediment and debris that have kept the Hyatt power plant at the dam’s base from operating.

The Hyatt plant provides power to local residents, and usually controls the inflow and outflow of water from the dam’s reservoir. The reopening of the power plant would allow maintenance teams to move some water downstream without having to utilize the eroded spillway (which could take months or years to fix fully).

Engineers are anxious to repair the plant ahead of a projected weekend storm that is sure to push the reservoir’s water level back up. If the dam’s reservoir gets too high, they will have to begin releasing water again. Meanwhile, if the repairs aren’t done quickly enough, the Feather River will continue to drop, leaving Chinook salmon high and dry downstream.

Most of the issues around Oroville Dam have to do with the dam’s main spillway. When heavy rains arrived, the spillway’s bedrock easily eroded, the long concrete spillway slip shifted off the underlying rock, and critical power lines that were carelessly strung across the area were damaged. However, the forced evacuations of nearly 200,000 people downstream have put dams in general back into the national spotlight.

If the Oroville Dam should fail, it has the potential to seriously harm, or even kill, thousands of people living downstream. Its reservoir, which would be lost in a dam break, stores water that irrigates farms and provides drinking water to people living in Los Angeles. Many Oroville residents have expressed frustration and disgust that it took a crisis situation before they finally started seeing the money necessary to fix long-standing structural issues across the dam and spillway system. The Oroville Dam became the nation’s tallest dam when it was completed in 1968. The dam heads the State Water Project, which moves water from Northern California down to satiate Los Angeles. The crisis began when, after years of drought, the area recently received so much rain that the Oroville Lake rose 50 feet within days.

When officials began letting water out over the concrete spillway, a crater appeared in the spillway (a crater that is now 300 feet wide, 500 feet long, and 45 feet deep). Pushing water over a backup auxiliary spillway (which is really just a hillside), only caused that spillway to erode dangerously as well. Debris from the erosion caused the power plant to shut down, and suddenly everyone was worrying seriously about some sort of catastrophic break occurring in the system.

Unfortunately, the present situation could have been avoided. Three environmental groups filed a complaint with the Federal Energy Regulatory Commission, warning that the dam was unsafe back in 2005. In 2015, the state initiated an inspection of the primary spillway, but the concrete was not inspected.

Of course, the Oroville dam is not alone in overdue maintenance needs. According to the American Society of Engineers, the U.S. has 4,000 deficient dams, and 2,000 deficient high-hazard dams. In 2013, the group gave the United States a “D” grade for its care of the nation’s dams. Of course, many environmentalists, outdoorsmen, and scientists have argued for decades against building dams in the first place, and in many places have been advocating for dam removal. As it turns out, you don’t have to watch the documentary “DamNation” to look around and question the wisdom of trying to control our rivers in the extreme ways that we have.

Worldwide, dams have displaced between 40-80 million people. Dams don’t just have disastrous effects on upstream communities either—they also have devastating effects on the surrounding environment. Threatening fish populations, depriving river river deltas of essential soil and nutrients, and causing disease and stagnation within the waters of backed-up reservoirs, dams are in many ways an environmental nightmare.

Currently, the United States has more than 75,000 dams (structures standing more than three feet in height). However, most consider five dams (the Glen Canyon Dam, the Grand Coulee dam, the Matilija Dam, the lower Snake River dams, and the Klamath River dams) to be some of the most problematic.

Unfortunately, in addition to their environmental costs, many of these dams are ineffective in fulfilling their original purpose: storing water and preventing floods. In general, all dams suffer from three problems: 1) clear, fast moving water flowing through the dam destroys riparian habitats, and robs downstream areas of essential nutrients and sediment deposits 2) Sediment buildup on the upstream side of the dam slowly reduces the ability of the reservoir to hold water 3) Dams release alarming amounts of methane—equivalent to over 7.5 billion tons of carbon dioxide over the last 20 years.

While the Oroville dam has recently soared into the news spotlight, due to the current risk it poses to downstream communities, the five above-mentioned dams arguably deserve equal attention and reanalysis.

For one, the construction of the Glen Canyon Dam destroyed Glen Canyon. While for thousands of years the canyon’s wild red rock walls cradled the Colorado River on its journey to the sea, this natural masterpiece (documented by a group of brave river runners in the 1950s) now sits submerged under deadened water. Many consider this one of the nation’s lost wonders.

Meanwhile, Glen Canyon Dam’s reservoir, Lake Powell, continues to lose 8% of the Colorado River’s water annually. The lake’s large surface area, desert surroundings, and absorbent sandstone base make it a poor choice for a reservoir. Evaporation and absorption of water into the bedrock mean that huge quantities of precious water are lost each year–hurting an already strapped system.

Meanwhile, Washington’s Grand Coulee Dam, while generating up to 21 billion kilowatt-hours of electricity annually, has caused the Colombia River’s fish populations to drop to just 8% of historical levels. Tens of thousands of Chinook salmon that made the Colombia River home for thousands of years are now gone.

In fact, 25 years ago the American Fisheries Society estimated that, out of all the once-prolific salmon runs in the Northwest and in California, at least 106 fish stocks have gone extinct.

Similarly, the Matilija dam has decimated populations of southern steelhead. With only 200 steelhead remaining, downstream beaches destroyed, and the dam’s water retention at 10% of its original capacity due to sediment buildup, many argue that it is time for the dam to go.

Meanwhile, the Lower Snake River Dams have caused all four varieties of the river’s salmon to be declared endangered, with populations plummeting to 3% of their historical peak. The Army Corps of Engineers’ stated solution? To transport fish around the dams by truck and barge, despite the fact that the Northwest Power Planning Council concluded in 2010 that the region could meet both its current and future energy needs without the dams in place.

Sadly, the Klamath River dams, a system running from Oregon into California, have opened up the possibility of a new problem: changing river temperatures. Four hydropower dams along the river (Iron Gate, Copco1, Copco 2, and JC Boyle) not only deny fish passage, they’ve also changed the temperature of the river’s water so much that a series of toxic algal blooms have spread over the area—creating a poisonous environment dangerous even to humans. There is, however, always hope.

Congress is currently considering a bill to remove the Klamath River dams, following intense lobbying efforts on the part of PacifiCorp, local farmers, indigenous leaders, and state politicians. Fortifying the effort, a recent study by Oregon State University showed that rivers and their ecological communities can bounce back amazingly fast following dam removal.

Indeed, within two years of the Elwha dam removal, scientists record a hundred-acre increase in healthy riparian habitat along the Elwha river’s shores, an immediate return of fish species to the area, the creation of a whole new river delta at the river’s mouth, and a rapidly improving ocean estuary.

In addition, new technologies and management practices, including improved solar and wind power, the use of reclaimed water, low use water fixtures, drip irrigation, and the planting of regionally appropriate crops, are making the need for dams across the board increasingly obsolete. So maybe, just maybe, the aging of our infrastructure will require us not only to update and improve our river control systems, but to consider whether or not they should be there in the first place.

Maybe, just maybe, this is the true coming forth of a movement that has been gaining steam for some time now. Maybe, just maybe it’s come time to really change—to start listening to indigenous groups, outdoorsmen, fishermen, and long-ignored communities—and finally restore the health of our nation’s rivers.

Interested in helping out? Check out your area for a local watershed or river group dedicated to removing dams, or support one of the following organizations:

One thought on “Lessons from the Oroville Dam”