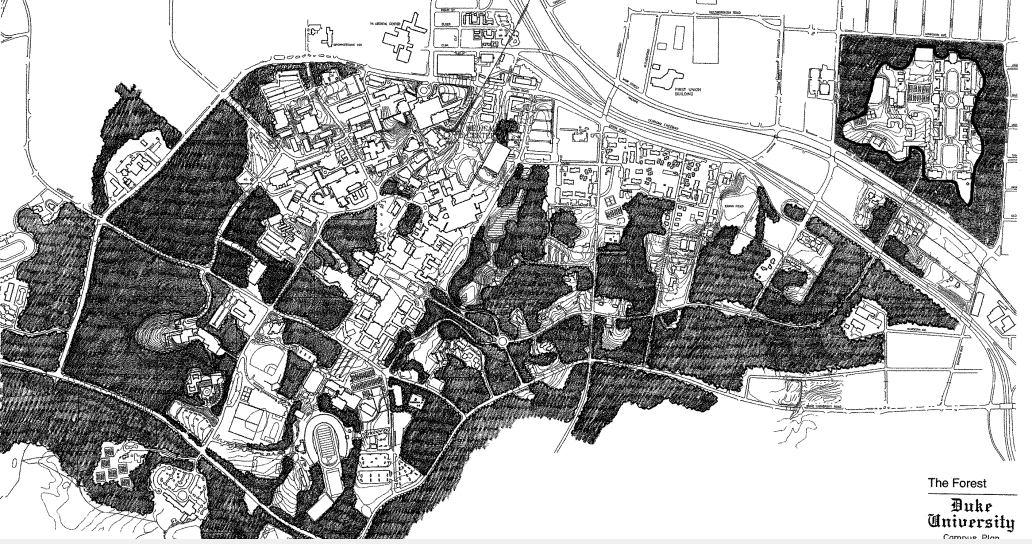 Duke is special among its peer institutions for being a “campus in the forest.” Not only does it have the Duke Forest, a sprawling 7000+ acres that spans Durham and Orange Counties, but it also has some wonderful patches of old growth woodland right in the heart of campus. Even in the most densely built sections of campus the roads are often lined with trees and buildings are complemented by forests or wooded gardens.

Yet over the years and decades forests on campus have been gradually chipped away for construction of research laboratories, parking garages and administrative offices, all of which were built in name of progress during an era in which Duke has enjoyed phenomenal growth and prosperity. Portions of the remnant forest fragments lie on prime real estate that could arguably be better used for expansion of facilities. The university’s need for growth continues today and it is confronted with some difficult choices.

This fall I joined the Natural Resources subcommittee of the Campus Sustainability Committee, which has been tasked with building a framework for evaluating the natural spaces on campus. It may seem simple, but it’s a deceptively difficult task. Any attempt to place value on natural ecosystems is fraught. Just ask environmental economist Robert Costanza, who put a per-acre price tag on every ecosystem on earth. He managed to get his study published in the journal Nature, which earned him scientist-celebrity status as the authority on valuing ecosystem services, but he also received scathing criticism for his methodology.

Despite the challenge of the task ahead, Duke lacks the luxury of a deliberate approach. The fate of two imminent construction projects and two prime forest patches hang in the balance: 1) the engineering mega-complex known as CIEMAS is due to expand into part of the demi-sacred ‘Chapel Woods,’ and 2) a swath of the old growth ‘Anderson Woods’ is due to be leveled to make way for (ironically) a student health and wellness center.

In the case of Anderson Woods, biology department faculty and students have already filed a formal ‘protest letter’ with the Executive Vice President (see this article in the Chronicle). Their quibble is as much about the forest succession research plots that will be affected as it is about the fact that researchers were notified to wrap up ongoing decades-long experiments just a few months before ground was set to be broken. They requested that the building site be “revisited” and that stakeholders from the biology department be made part of any reconsideration.

I took a stroll by Anderson Woods a few weeks ago just to try to gain some first-hand impression of the resource we are about to sacrifice in the name of health and wellness. Right at the corner of Towerview Road and Union Drive a Hermit Thrush popped up onto a dead branch. It stared at me, bobbing its tail as if to say: “I value these woods; they are my winter home.”

Silly bird. Your irrationally anthropomorphized feelings are of no importance to anyone.

The next week I found a Hermit Thrush dead outside my lab window, the victim of a window collision. I wonder what kind of windows the architects will use for the new building and if they will consider minimizing bird death?

Moving on to #2: Chapel Woods…

I don’t actually know of any official information about what is being planned for the future of the Chapel Woods (so take the information I present here with an appropriate dose of salt). There are just the rumors swirling around campus; eyewitness accounts of test drilling and surveying;  the telltale flagging tape and cleared understory left in the wake. Why the need for secrecy? Probably because everybody knows how controversial construction in this site would be.

Chapel Woods enshrouds the iconic Duke Chapel in sylvan splendor and was an important component of the original campus design. Not only does it exhibit compelling ecological health, but the paths that bisect it are traversed by tons of people (is there data? I would guestimate 1000s) every day.

Any construction that threatens the Chapel Woods will be wildly unpopular with anyone who spends time on West Campus and it would be kind of like throwing a shovel-full of dirt into the eyes of both God and Gaia at the same time.

I stroll through the Chapel Woods at least once a week on my way to lunch, and naturally, I’ve been waylaid from time to time by bird activity. Over the years I’ve logged 33 species; that’s a lot for a 4-acre plot. This past spring the forest seemed especially thick with migrating warblers. It was as if they were trying to make the most of what could be their last season of use. Check out this checklist.

…unless it has crashed into a window.

CIEMAS has killed more birds than any other building in a study of bird-window collisions across 40 North American college campuses (not yet published). It’s like what J. J. Reddick was for Duke Basketball a decade ago—so prolific that it single-handedly propelled Duke to a #1 national ranking. Yes, Duke is America’s deadliest campus for birds.

I wonder what kind of windows they’ll use in the CIEMAS expansion?

The Natural Resources Subcommittee is scheduled to meet every month next semester (we have a lot to do!) I’m looking forward to some interesting discussions and seeing how our work influences (or not) campus planning.

If you are a member of the Duke Community, particularly if you are a graduate or professional student, and have any opinions on the future of Anderson Woods, Chapel Woods, or natural spaces on campus in general, then please leave a comment or send me an email. My primary duty as a member of the Natural Resources Subcommittee is to understand, represent and express the opinions of my student peers. Thanks for your contribution and interest in making Duke a better place.

2 thoughts on “The Fate of Forests on Duke’s Campus”