Today we drove over to the easternmost point of the island of St. Croix and of the United States. It was quite different from the western part of the island, as it was very dry here. I cannot recall another time when I actually wished for humidity! We took a hike to Issacs Bay and Jack Bay. The vegetation was like nothing I had ever seen in the Caribbean. There were cacti galore! We were surrounded by dry scrub on the hilly terrain that we trekked through. This is the closest thing to a desert that I have ever experienced, and although it was a draining and hot day, it was a beautiful site to behold. 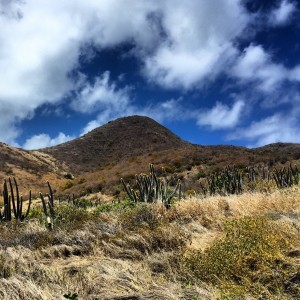 Our first respite from the heat was at Isaacs Bay, where we were able to stick our feet in the water as we longed for our bathing suits. The area was a perfect location for photos. After we all took in the coolness of the ocean breeze and the majesty of the setting around us, we moved onward to Jack Bay. 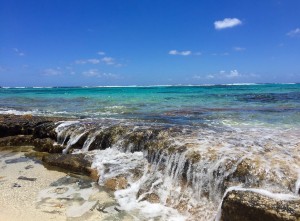 Jack Bay was rockier than Issacs Bay. After carefully stepping through all of the rocks and corals on the shore, we ate lunch on a long board that Matthew laid out for us. Since it was Earth Day, the instructors advised us to each pick up litter from the beach. I found a couple water bottles, what appeared to be some sort of motor oil bottle, and a huge flip-flop. One of the water bottles was Venezuelan, and I wondered if the ocean brought it all the way to the shores of St. Croix. Ian pointed out to me what appeared to be bite marks from turtles on the flip-flop, a solemn reminder that plastic pollution is just one problem on a list of many that harm these animals.

After our hike back from Jack Bay we went to explore the town of Christensted. We all made a beeline for cold, tropical drinks and smoothies: our second respite from the heat of the day. After a bit of relaxing, we were on our way back to the Cottages.

That night we had a very uneventful time at the turtle patrol. Absolutely no turtles came out while we were patrolling, to our dismay since this was our last night out. Instead we got to bond and tell stories while waiting in between patrols, so all was not lost.