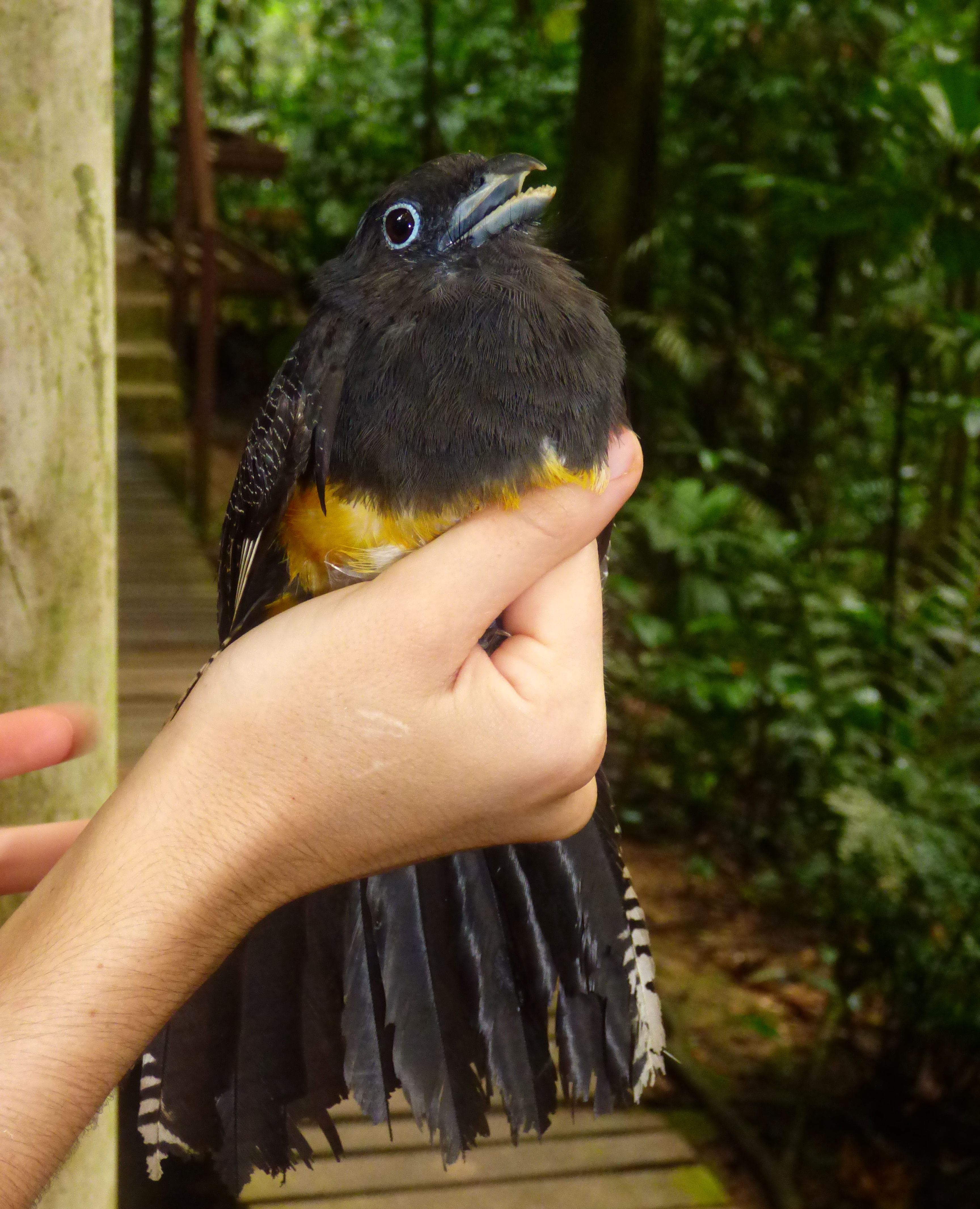 Trogons bite hard! Though it may look like a Muppet, that bill is serrated and powerfully built for plucking and crushing tough fruits and beetles. This spectacular creature is just one of more than 600 bird species found in the most biodiverse place on Earth.

I got to know this bird’s bite force over winter break, when Natalia Ocampo-Penuela (also a Nicholas School PhD student) and I led a trip for nine paying eco-tourists to Ecuador’s Yasuni Biosphere. Both of us being bird-nuts, it was of course a birding-heavy ornithological workshop. The academic focus, with nightly lectures and mist-netting qualified the trip as “science tourism,” which allowed us to utilize  Tiputini Biodiversity Station and its unparalleled facilities as a base.

To call the station, “remote,” doesn’t do the setting justice. It takes 4 legs over a full day to make the journey from Ecuador’s high Andes capital, Quito: step 1) a plane flight to the ramshackle lowland jungle town of Coca; step 2) a 2-hour boat ride down the Napo River to a Repsol (a petroleum company) security checkpoint; step 3) a 2-hour open-air truck ride down a gravel oil-well-pad road; and finally, step 4) a 2-hour motorized canoe ride down the Tiputini to the station.

The reward for all this travel effort is the opportunity to experience a pristine rainforest ecosystem untrammeled even by aboriginal hunting pressure. The local monkey troops have learned that the resident research scientists are harmless (well, except that one primatologist who carries a traquilizer gun!) and frolic in the tree tops over the cabins. We saw nine of the 10 regularly observed monkey species in six days!

Indeed, despite the bird focus of the trip, fantastic mammal sightings threatened to outshine the birds. While tooling around the river we saw a Red Brocket Deer cross in front of our boat, a Neotropical River Otter toting a fish meal and several of odd echo-locating Pink River Dolphins. We never saw the king of the Neotropical jungle, the jaguar, but we same across several of its favorite meals: the pig-like Collared and White-lipped Peccaries. The latter species moves in herds of up to more than 100, the snorting sounds and foul odors of which, can permeate the dank forest understory.

Of course the lack of human hunting pressure made seeing some of the sensitive terrestrial turkey-like birds a relative cinch. The moaning sounds of male Salvin’s Curassows and the wing-rippling trills of Blue-throated Piping-Guans were ever-present and we got to within blow-gun range of a few of each displaying in trees. Apparently they taste delicious and are some of the first species to disappear when human hunters access a pristine forest.

Macaws, parrots and parakeets, which are often tragically captured from the wild for the illegal pet trade, were ubiquitous around Tiputini. Scarlet or Blue-and-Yellow Macaws would go careening by overhead on an hourly basis, squawking some unintelligible psittacid language of harsh jumbled vowels. The most incredible parrot display, however was at an exposed eroding bluff called a “clay lick” just a few kilometers downstream from the station. Here the parrots arrived by the thousands to practice geophagy—that is, to eat dirt, which scientists believe provides them with much-needed minerals that aid in helping digest the large volume of under-ripe fruit laden with chemical defense compounds the birds consume each day.

One of my favorite Amazonian birds is one that hunters, both human and animal, avoid entirely: the Hoatzin, known colloquially as the ‘Stinky Turkey.’ Like a cow, it has four stomachs to digest the tough cellulosic tropical leaves that comprise its diet. But for many observers, it is more reminiscent of an ancient dinosaur than a domestic herbivore. The nestlings even have claws that protrude from their wings to help them clamor among tangles of riparian branches.

The morning after I delivered a lecture about Amazonian wetlands, we took the group out for a paddle around the station’s oxbow lake. It was filled not only with Hoatzins, but all sorts of wetland birds. We saw an Agami Heron and Natalia even spotted a nesting Rufescent Tiger-Heron!

To avoid leaving our participants (or you, dear reader) under the impression that the Amazon is all Ecuador has to offer, we spent buffer days on either side of our travel to Tiputini exploring two other ecosystems just a couple hundreds kilometers and worlds apart from Amazonia: 1) the open high-elevation Paramo, or wet grassland, lying in the shadow of the glacier-capped Antisana Volcano; and 2) the all-you-can-eat hummingbird and antpitta buffet of the West Andes mid-elevation cloud forests.

Ecuador is where I fell in love with Neotropical birds years ago. It’s such a special place because it packs so many hyper-diverse ecosystems into a relatively tiny package roughly the size of Colorado. Thus, it boasts a national bird list of more than 1600 species, roughly double the amount found in all of North America. In 10 days we encountered 382 species, which is far more than a North Carolina backyard birder could ever hope to see in a lifetime.

This is the third trip to the Neotropics Natalia and I have led together and I sometimes joke that if we devoted ourselves to these venture full time, we could make far more money than we are likely to earn as post-doctoral researchers. That probably says more about the dire state of the job market for matriculating PhDs than it does about our skills as trip leaders. Nevertheless, our reputations have made us quite popular; we had to turn away several disappointed birders from our Ecuador expedition. For now, at least, we run these trips as a side-gig and are happy to let the Carolina Bird Club absorb any surpluses. But if this research career thing doesn’t pan out, at least I’ve got a back-up gig to cover the rent.

For a more thorough, birding-oriented account of this trip, see my other blog, Birds on the Brain: http://birdaholic.blogspot.com/2016/01/a-carolina-bird-club-ornithological.html