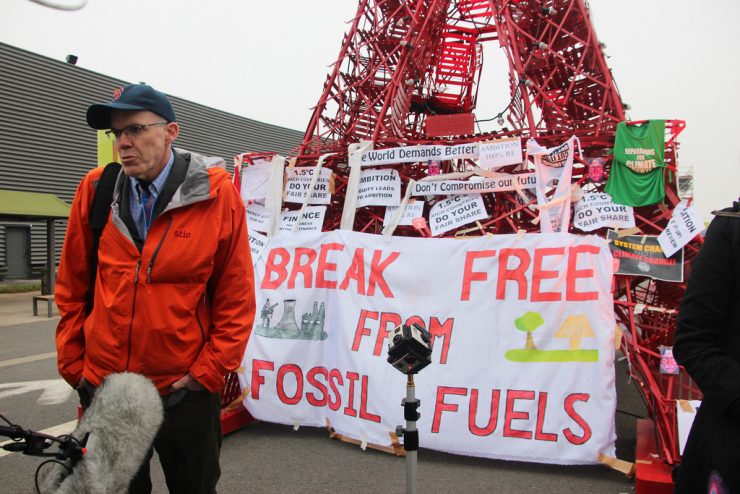 “There are no silver bullets, only silver buckshot.”

As I wrote in my very first blog post, the titular phrase of my column was coined by Bill McKibben. It was no accident that I chose McKibben as the inspiration for my blog. As an author, journalist, scholar and activist, McKibben is a guiding star for a new generation of the environmental movement.

Last week, that star landed on Duke’s campus to talk with students about his work, his philosophy and his vision for the future.

I attended McKibben’s primetime lecture on “Climate Crisis/Climate Hope” at the Divinity School, as well as an informal conversation he held earlier that afternoon with a small group of students.

McKibben is the first to admit that he’s a natural introvert, more comfortable writing his thoughts on the page than exclaiming them to an audience. But his years of public activism and personal dedication to the cause shone through in all he had to say, and I don’t think I was alone in hanging onto his every word.

Here, then, is the world according to Bill McKibben:

On creating a movement:

McKibben first became an activist for climate change action in 2006, nearly two decades after publishing his seminal book on global warming, The End of Nature. For a long time, he said, “I was under the misapprehension that reason and argument [would be] the tools that turn the world.”

But after years of politicians turning a blind eye to the mounting pile of evidence on climate change, McKibben knew he couldn’t stay on the sidelines any longer. As he saw it, inaction meant the fossil fuel industry was winning.

“It wasn’t an argument we were engaged in,” he said. “It was a fight.”

McKibben jumped into the fight feet first – literally. During five days in September, he led a walk across his home state of Vermont to call attention to climate change. At the end of the march, 1,000 people gathered for a rally in Burlington.

The next year, McKibben founded 350.org, a grassroots group dedicated to climate action, with the help of seven undergrad students at Middlebury College. In 2009, just three years after that first march in Vermont, 350.org helped organize over 5,200 demonstrations in 181 countries for an “International Day of Climate Action.”

McKibben’s role model in writing is Wendell Berry, who aside from being a prolific poet and novelist shares McKibben’s passion for environmental activism. He names Marvin Gaye’s “Mercy, Mercy Me (The Ecology)” as the greatest environmental anthem of all time. Gaye’s song played no small part in firing up the early environmental movement when it was released in 1971, the year after the first Earth Day.

As a Sunday School teacher, McKibben sometimes invokes scripture to make clear just how historic our current climate crisis is, even on a biblical time scale.

“We can only imagine the rainfall totals last month in Houston and Puerto Rico by reference to Noah,” he said. “Now we, not God, are setting the boundaries of the ocean.”

On changing the movement:

A social movement is like a battery, McKibben explained. After decades of momentum (and much success) fighting to clean up the air and water in this country, the U.S. environmental movement lost its charge.

The America of the 2000s looked a lot different than the America of the 1970s, but the big institutions that had emerged to lead the early movement hadn’t kept up with this change. The League of Conservation Voters, for instance, no longer represented the political views of most environmentalists.

Slowly, McKibben said, the movement is now starting to re-orient itself to new priorities, new challenges and a new generation. Environmentalism is becoming more grassroots and more diverse. In his view, the reaction to the drinking water crisis in Flint, Michigan, and the Dakota Access Pipeline protests in Standing Rock, North Dakota, represent the new direction of environmentalism in the 21st century.

McKibben’s new pet project is rallying cities, states and eventually countries to “keep it 100” – 100% renewable energy, that is.

With the window shrinking for action to avert the worst effects of climate change, McKibben believes that the time for gradual change (which to him includes a price on carbon) has passed. Now, the positive vision of a 100% clean power grid may be just the carrot we need to drive rapid and meaningful change.

Meanwhile, McKibben says, it is critical that the rest of us do our jobs as citizens to resist policy changes that move us in the wrong direction. Whether that means calling legislators, knocking on doors or protesting in the streets, we can’t let fear stop us from taking action.

“The Earth is outside of its comfort zone,” McKibben reminded us at the end of his lecture. “Now we all need to get out of ours.”