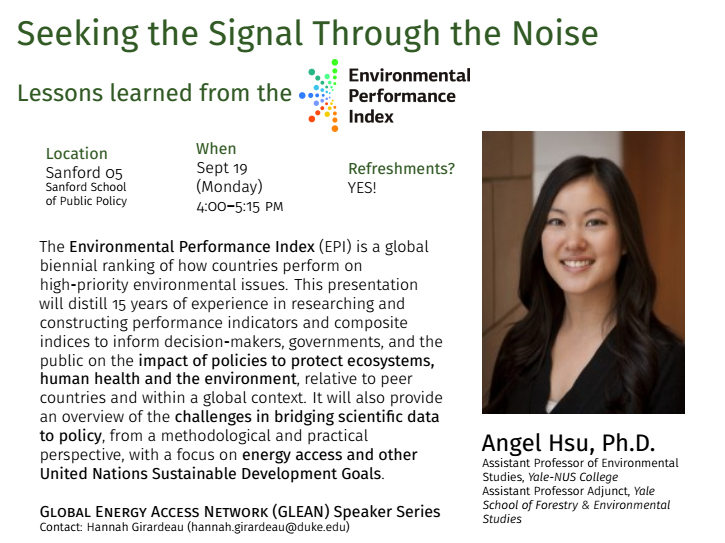 On 4th November 2016, the landmark Paris Agreement on climate change came into effect. 191 countries signed the agreement to reduce greenhouse gas emissions in efforts to prevent global temperatures to rise beyond two degrees Celsius. This adds yet another metric to the growing list environmental issues countries must keep track of.

So how do countries compare success in achieving environmental goals? Back in September, the Duke Energy Initiative hosted Dr. Angel Hsu, Yale University. She led the development of the Environmental Performance Index (EPI), a measure of countries’ performance on environmental issues such as climate change.

Under the EPI, the two main policy objectives of ecosystem vitality and environmental health are comprised of many equally-weighted indicators, including carbon emissions and air pollution. For each indicator, countries are scored on how close they are to reaching international targets, and ranked against each other.

Born out of the Environmental Sustainability Index, the EPI not only helps governments track goals as its predecessor did. This new iteration aligned indicators to explicit issues outlined in the Sustainable Development Goals to be achieved by 2030. Thus, the EPI translates scientific data from across environmental fields into a synthesized performance score. From this, decision-makers formulate and invest the limited resources available into policies explicitly targeting pressing environmental issues. Commitment is ascertained with progress evaluated based on this composite score.

However, the EPI is not without its controversies. At the methods level alone, evaluation of country performance is often restricted by lack of information. For example, wastewater treatment metrics were scarce across countries, and fisheries data are often underreported. Statistical compensation was thus often required for parity of scores and the resultant scores were scaled according to how reliable the data sources are.

Yet how can the landlocked Austria compare to the developing Mozambique? The former has no stake fisheries or marine protection. On a completely unrelated note, the latter scores better on emissions due solely to its less developed economic state. To compensate, each indicator has a “materiality threshold” criterion. For example, in the case of Nauru, the entire country’s size alone is too small to meet the minimum area of forested land evaluated under the indicator for terrestrial biome protection. Thus, the indicator is considered “immaterial” for Nauru and the weightings of the other indications are adjusted proportionally. Additionally, indicators are modified for less developed nations.

The resultant EPI ranking, which is vetted by experts, has an unsurprising trend: the scores correspond to GDP per capita. Understandably, with wealth, countries are more able to invest in areas including clean water and sanitation infrastructure. However, issues such as air pollution bucks that trend, where more developed countries also have more industrial activities, thus less clean air (Hsu, 2016).

Regardless of the methodological limitations, many countries including China, India, Malaysia, and Abu Dhabi Emirate (UAE) have adopted modified versions of the EPI. This still does not escape the challenges of accounting for trans-national issues such as air pollution blowing across borders. However, this regionalisation does allow a finer-scale evaluation of differences in environmental performance between rural and urban areas that would otherwise be over-simplified at a national scale.

Ultimately, measurements matter in keeping track of a country’s progress towards environmental goals. Taking the meaning of the numbers with a pinch of salt, the EPI achieves a holistic evaluation that no other indices comes close to achieving. However complicated the data gathering and ranking of performance between countries, a metric is better than none.