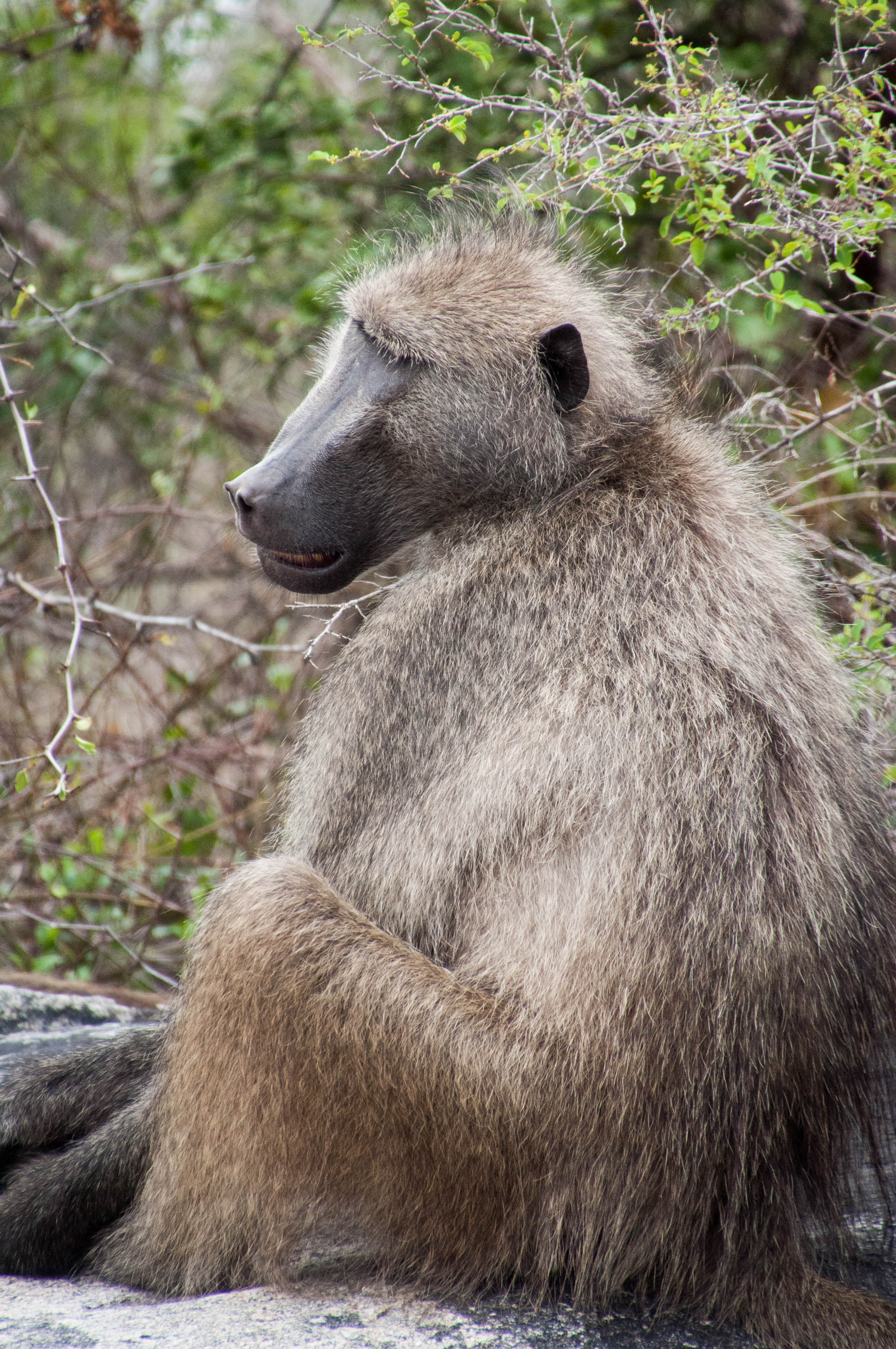 The sun was just peeking over the horizon. The room was still dark and cold. I was snuggled in the cocoon of my warm sleeping bag, in the sleepy haze of a semi-dream state. Then it happened. A hundred heavy footfalls thundered against the thin tin roof that separated us from the gurgling screams of declarations for dominance sounding above our heads. Students bolted upright in our bunks, the windows rattled in their frames as bodies slammed against each other, unseen but well heard. Our hearts were struck with fear as we gazed around wide-eyed, defenseless, wondering what will befall us…

Okay maybe that description is a slightly over-exaggerated dramatization.  But waking up to the clangor of a troop of baboons fighting on the roof was a terrifying experience – at least for me. I was really surprised by how fascinated the Americans were with the baboons, cooing over them non-stop. It took me a while to remember that there were no modern non-human primates in North America. Part of my friends’ attraction to our distant evolutionary cousins was their foreign-ness (Duke’s excellent Evolutionary Anthropology department, the ever-popular Primate Sexuality course, and beloved Lemur Centre contributes to the appreciation too of course). On the other hand, I grew up with macaques attacking by-passers and barging into homes for food. So, I (and the South African students who were also wary) selectively saw only the baboons’ fangs and aggressive dominance displays; while my friends marvelled over the baboons’ complex social behaviours.

Human-wildlife conflict becomes particularly thorny when it comes to primates. To start off, their intelligence and curiosity heighten their likelihood to interact with humans as opposed to more timid animals. However, due to their resemblance to humans, people project different perceptions and expectations onto primates as compared to other taxa. Consequently, primates are treated differently, adding a dimension of complication when resolving the conflicts. The roles of primates in different cultures vary widely. Lee and Priston of the University of Cambridge have documented perceptions of primates that range from being revered as spiritual symbols, to being detested as crop-raiders or urban vermin, to being tolerated as pets or entertainment. So how does this affect the management of solutions?

In Singapore, urban development has encroached on much most of the original tropical rainforest. Conflicts where humans are attacked by the native long-tailed macaques make it to the news sporadically. Feeding of monkeys have been attributed as the cause for the macaques growing bolder and approaching humans carrying food or backpacks. As a result, the Agri-food and Veterinary Authority (AVA) responded by culling up to 700 ‘problematic’ individuals. However, this does not sit well with my friends who are animal-rights activists. They encourage other strategies such as installing monkey-proof bins to reduce raiding, and educating residents to keep windows closed and not to provoke macaques. While residents like me do sometimes feel that the macaques are a nuisance, surveys by Sha et al. in 2009 showed that residents would prefer alternative solutions to culling. However, given Singapore’s land scarcity, buffer zones is not a viable option. Rather, my fellow citizens and I will have to accept that macaques are part of the landscape and adapt their own behaviour.

In Thailand, monkeys are also considered vermin as they are crop raiders. However, there is still an element of tolerance due to cultural cosmological beliefs surrounding the intelligent animals. As a result, monkey temples exist where troops are allowed free rein. These often coincide with Buddhist communities where killing is strongly opposed. Residents feed monkeys, and even derive income from visiting tourists, but will chase monkeys out of residences. The feeding of monkeys raises issues of over-reliance of troops on human-populated areas and could increase conflicts in future. The close contact of the two species also carries the conservation risk of interspecific disease transmission. Agricultural practices have started using dogs as deterrents, which can be effective against habituation of the monkeys.

However, confronting the exploitation of the animals for tourism is a much tougher issue. One of my memories of spending summers in China as a young girl was watching a street performer yanking a gibbon on a chain leash, forcing it to perform tricks with a training whip in hand. My mother only laughed when I asked why nobody called the police on this blatantly illegal animal abuse. Nijman et al. (2011) have found that China leads the world with 31% of illegal primate exports, mostly to the exotic pet trade. Primates have particularly strong cultural associations in this part of the world, where every child knows the legends of 孙悟空, the Monkey King. His reputation for wrecking havoc with his magical staff probably does not help his real-life compatriots. Growing up, I loved listening to his adventures in the epic Journey to the West, as do millions of other Chinese. I believe that conservation of primates can play on this popular tale, emphasizing his eventual redemption and Buddhahood to form a more positive public image of primates.

Back to South Africa, my personal prejudices towards primates still stand, but quite separately from my evaluation of them from a conservation perspective. If nothing, they have (literally) awoken me to pay closer attention to the different cultural perceptions of wildlife in different parts of the world. While I maintain a wide berth from the large, be-fanged baboons, I do however still wriggle my opposable thumbs surreptitiously in my pockets when the smaller vervet monkeys are near though.