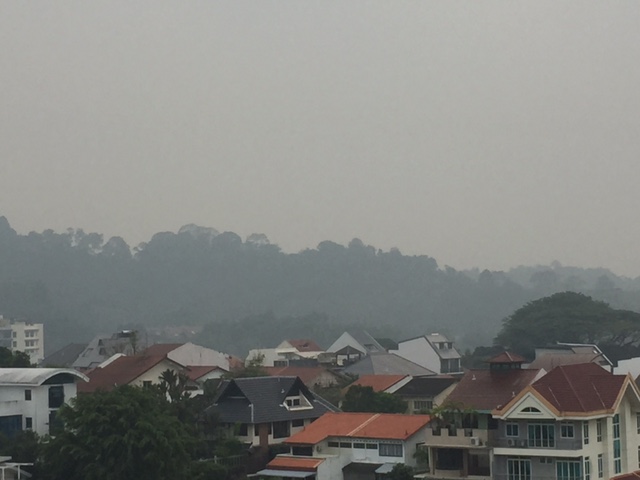 As September turned into October, the wind picked up in North Carolina while autumn blew into season. Yet in my home country, Singapore, the wind brings only a suffocating haze.

Slash and burn agriculture and forest fires on the Indonesian island of Sumatra has resulted in huge plumes of smoke polluting the skies of South-East Asia. Picked up by the monsoonal winds, the smog spreads up towards Singapore, Malaysia, Brunei, even Thailand and Vietnam. Ironically, the companies that own the land which are being cleared, primarily invest in oil palm plantations and originate from these countries.

On 25 September, the pollution standard index (PSI) in Singapore reached hazardous-to-health levels of ­­­341, an all time high. The Ministry of Education issued a statement forcing primary and secondary schools to close and all outdoor activities to cease. The cases of asthmatic respiratory issues have increased, and people leave their houses fully covered up with face masks. Nearly 1000 fire hotspots were detected in Sumatra, a state of emergency was declared in the Riau province. Dr. Siti Nurbaya, the Indonesian Minister of Environment and Forestry, said that “We have deployed soldiers. We have conducted water bombing in Riau with 18 million litres of water, in South Sumatra and Jambi with 12 million liters of water. Cloud-seeding in Riau with 120 tonnes of salt and 56 tonnes of salt in South Sumatra”. Singapore and Malaysia have also offered financial and military assistance to cope with the forest fires.

However, the narrative of the haze as portrayed by the daily headlines is telling of where public concerns lie. While the health impacts are heavily emphasized, along with economic losses from reduced tourism, evaluation of biodiversity loss is conspicuously missing. Rather, Singaporean and Malaysian news increasingly vilify Indonesia for poor forest management and only ratifying the Association of South East Asian Nations (ASEAN) Agreement on Transboundary Haze Pollution in 2014 (1).

The haze has been a significant problem since 1997, but effects have worsened with El Niño years. The blame game played by the media distracts from the detrimental impacts the burning has on the ecosystem. Located in the Sundaland biodiversity hotspot, the tropical rainforests of Borneo have some of the world’s densest collection of endemic plants and vertebrates. The haze is but a symptom indicating the widespread environmental degradation where natural habitat is lost to monoculture. In particular, the peat swamps forests found in Borneo are a unique habitat by itself, in addition to supporting critically endangered Orangutans and Sumatran Tigers.

The transboundary nature of the haze presents unique diplomatic challenges between countries. Governments have increasingly become more active in taking steps to seek out and penalize culpable companies from their own country (2). However, public discourse remains concentrated on short-term solutions of wearing face masks and engaging in cloud-seeding to induce rains. From a conservation perspective, stronger public criticism against the environmental destruction is required to increase awareness of ethical consumption regarding palm oil products. The somewhat lacking civil society scene in these countries will need to step up to increase pressure on appropriate parties for us all to move forward.