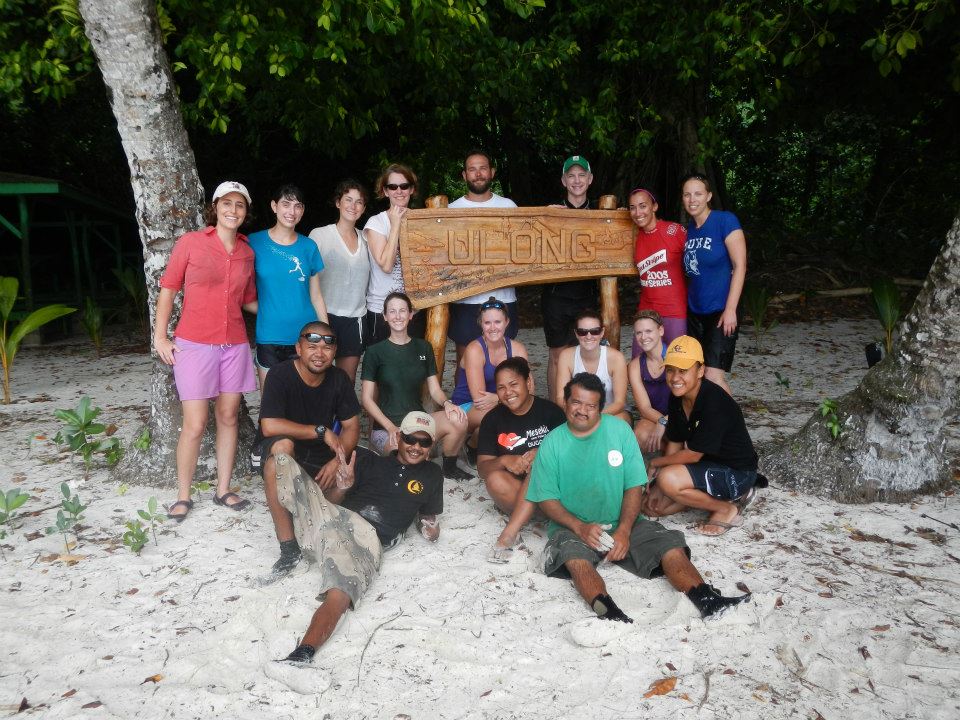 It has been nearly a decade since I first learned how to scuba dive and ever since then, Palau, the ultimate diving destination, has been on my bucket list of places to visit before I die. Having flipped through countless issues of Scuba Diver magazine, I had strong visions of what I would encounter beneath the surface of Palau’s azure waters (which really do come in every shade of aqua marine imaginable), but I never really stopped to think about what I would discover on terra firma. As it turns out, it was not the scenic underwater vistas and aquarium-like abundance of sea life that captivated me most throughout our stay in this picturesque country (don’t get me wrong, the diving really was spectacular). Rather, I have been continuously struck by the willingness of local Palauans to invite us in and share with us their incredibly rich culture and conservation ethic. Over the course of the last 10 days, I have quickly come to appreciate the most beautiful aspect of Palau that all the dive travel guides seem to leave out – its people and their stories. And today was no exception.

On this last morning of our adventure, we joined several Koror State Government employees on a day long boat trip to the infamous Rock Islands of Palau’s Southern Lagoon. Despite the low-lying cloud cover and looming tropical downpour, we headed out to our first stop, the Ngederrak Conservation Area, where we were granted special permission to snorkel and witness conservation at work. Prior to jumping ship, Ilebrang Olkeriil, Coastal Management Officer/ Campaign Manager for the Koror State Department of Conservation & Law Enforcement, informed us that Ngederrak contains several important habitats (including an inner lagoon, seagrass beds, coral reef channels, and outer slopes) and is home to many fish and invertebrate species as well as the very endangered (and elusive) Palauan dugong. Recognizing declines in Ngederrak’s important fisheries resources, Koror State initially implemented a two-year moratorium on entry and take in 2001, which was quickly extended for an additional four years. In 2005, the area was re-opened for two weeks. During this brief period, fishers reported the remarkable recovery of several species, which, together with a baseline monitoring survey, prompted the state legislature to permanently close the conservation zone ever since. While I sadly can’t report any dugong sightings, I can attest that Ngederrak is certainly thriving and is an excellent example of how an appreciation for ecosystem functioning and effective management can achieve on-the-ground conservation.

The next stop on our itinerary brought us to the historic Ulong Island. Although a few of us had already stopped here for lunch and walked along the postcard-worthy beach a few days before class started, we, like most tourists I presume, were completely unaware of the ecological and archaeological treasures that lay beyond the tree line. Upon our arrival to Ulong, Ilebrang spoke to us about the Rock Islands Facelift Program, which trains at-risk youth (“Beach Boys”) to maintain tourist amenities throughout the Rock Islands Southern Lagoon. Not only are the Beach Boys responsible for constructing visitor facilities, but they are also trained to landscape the beaches in such a way that minimizes erosion and associated impacts to the nesting sites of the endangered Micronesian megapode. For all you non-birders out there, megapodes are small, chicken-like birds that build incredible mounds out of debris, in which they lay their eggs. Although the megapode is protected under the Palauan National Code, the introduction of rats and ongoing poaching are likely culprits contributing to its continued decline.

As we walked beneath the shady tree canopy, Malang Eberdong, a bird specialist from the Belau National Museum, pointed out several active megapode nests that resembled nothing more than a pile of dirt and leaves to the untrained eye. “How can you tell it’s a nest?” I asked and to which Malang responded, “I just know.” It was at this moment that Ilebrang pointed out how little is known about megapodes and stressed the need to not only continue documenting their behavior and existing threats, but to also engage hunters and egg-harvesters skilled in identifying nests in order to improve state conservation efforts and preserve local knowledge.

Venturing further into the tropical forest, Zeder Eledui, a Boy Scout Master, and Phedias Brel, a researcher from the State and Cultural Affairs Department, led us to an archaeological site where remnants of a retaining wall, clay pot shards, and shell artifacts begin to tell the story of Palau’s early Rock Island people spanning over 4,000 years. After lunch, King Sam, from the Koror State Department of Conservation and Law Enforcement, led us up a rope ladder and daunting climb to a series of stunning stalactite caves. These caverns were recently closed to the public after the discovery of human bones in September 2012. While Koror State is awaiting confirmation, King speculated that we were likely standing in the midst of an ancient burial site. While I admittedly am not much of a historian, I was fascinated by the amount of history associated with Ulong Island alone, not to mention the amount of knowledge that each of our Palauan teachers possessed, and I can only imagine what has yet to be discovered in all of Palau and the stories they have yet to tell.

To top off the day, we traveled to Jellyfish Lake, one of Palau’s 57 marine lakes (and the only one currently open to visitors) located on the island of Mercherchar. As the name implies, Jellyfish Lake is home to millions (and I really do mean millions) of golden jellyfish belonging to a unique subspecies, Mastigias papua etpisoni, found nowhere else in the world. Now a popular tourist destination, Jellyfish Lake welcomes hundreds of snorkelers a day. As we hiked up from the lagoonside and down the Rock Island to the inside lake dock, Ilebrang told us about the on-going research that is taking place to determine the impact visitors are having on the lake’s natural inhabitants, including the effects of sunscreen and invasive species that have already established themselves in the lake. Snorkeling here was truly an out-of-this world (and harmless) experience and as I hovered motionless at the surface, allowing clouds of jellyfish to engulf me, I could not help but recognize our indelible duty (as tourists and budding conservationists) to help protect the truly breathtaking natural heritage of Palau.

As I reflect upon the day’s activities, I am humbled by the collective generosity of those who have dedicated their time to share with us their conservation knowledge and experiences in Palau. Although the tiny Republic often seeks international assistance in order to better manage their natural resources, this experience has made it very clear that we have just as much, if not more, to learn from them as they do from us. In the words of Tundi Agardy (2005), “we must recognize the importance of true leadership and ‘the power of one’ – and identify individuals with the vision, commitment, and power to move forward.” I think it’s safe to say that we met some of the champions of conservation today, who exemplified how individuals really can make a difference. Until next time Palau, I leave you in good hands.