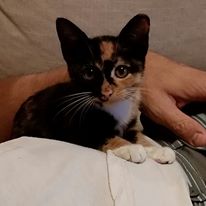 My friend Amanda possesses a heart of gold. She has always loved the environment and all the critters native to both her hometown in Virginia and her new home in Destin, Florida. She is also a friend to the furry species, and recently rescued two feral cats from the woods near her backyard.

We should all be like Amanda, and I’ll tell you why!

Feral and outside cats are a huge problem for birds across the country and around the world. In one study, outdoor cats were responsible for the deaths of 1.4 – 3.7 billion birds a year. That’s right, billions of birds each year, or about 10% of the total birds living in the United States.  In another study done by the Smithsonian Biology Institute and the U.S. Fish and Wildlife Service, researchers estimated that the mammalian toll rangea from 6.9 – 20.7 billion deaths every year. That is a lot.

I love cats, I truly do (I have two!), but they are an invasive species wreaking havoc on our native ecosystems. That’s where Amanda comes in. She discovered a small family of kittens, a mother and two young ones, in the woods near her house. Spending considerable amounts of her free time, Amanda lured each one into a humane trap using turkey and other food, then brought them to the vet. With funds from a local nonprofit, the vet gave the cats a first round of shots and a de-worming regimen before spaying all three. In one swoop, Amanda had prevented any more generations of feral cats descending from this line.

Next, she looked for homes for the kittens (the mother cat was too wild, and eventually escaped back into the forest). Moreover, she looked specifically for indoor situations, feeding and caring for the little guy and gal while she searched for suitable adoptive families.

Eventually, both babies were placed in loving, caring homes. While it may seem like a small drop of water in a big bucket of feral cats in this area, Amanda both prevented future groups of cats from killing birds and animals, plus removed two potential kitten killers from the environment. Don’t get me wrong, it’s not the cats’ “fault” that they kill birds and mammals, just a natural consequence of trying to survive. Perhaps most importantly, she showed empathy to creatures we humans domesticated as well to the native species they prey on; in the 21st century, all expressions of empathy should be lauded and encouraged.

If you notice feral cats in your neighborhood, call a local shelter or vet and ask what you can do to help. Amanda has definitely inspired me to embark on future rescues!