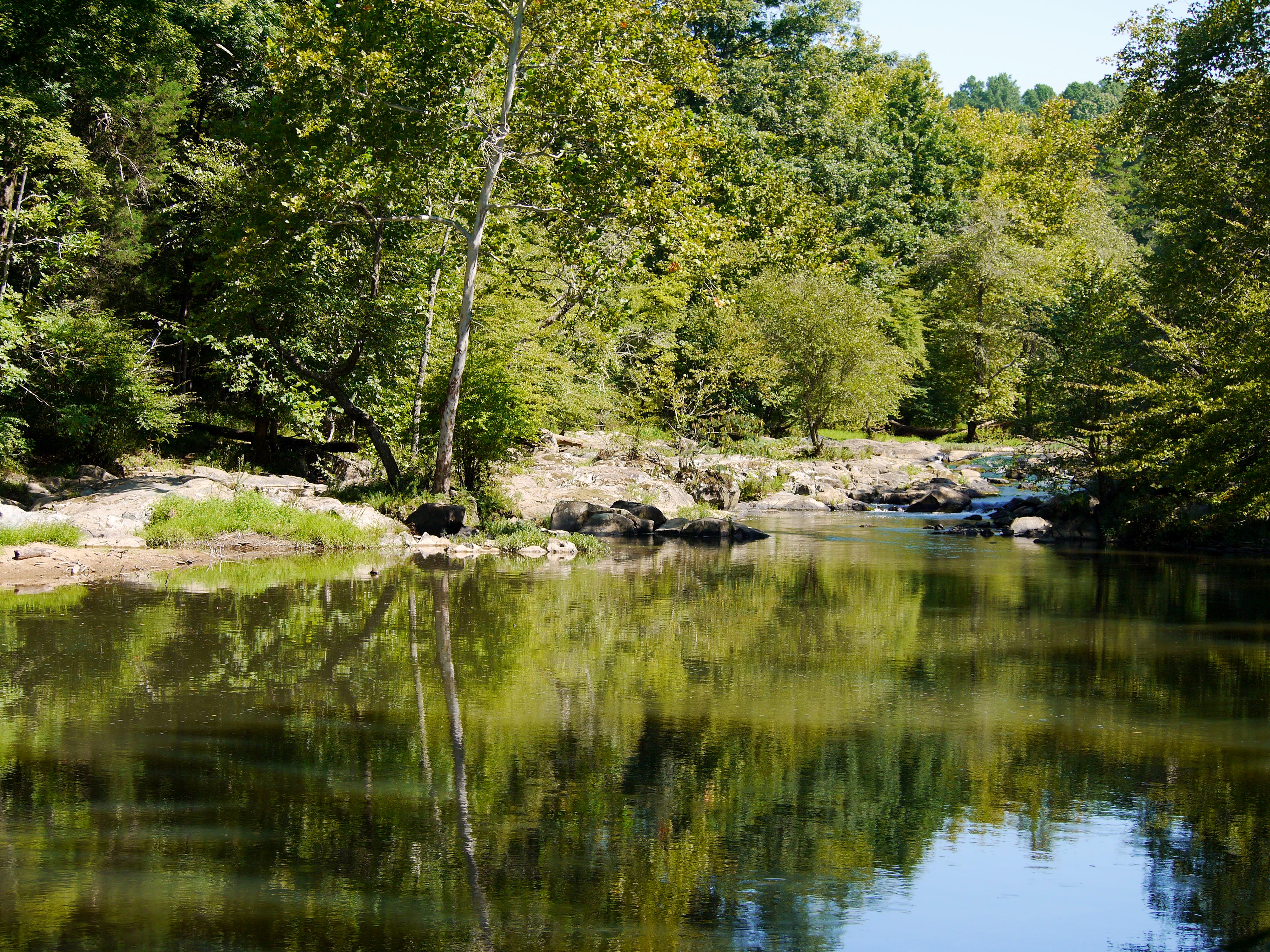 I didn’t want to open my eyes. It was Sunday morning, only a few weeks into the semester, and I knew what I would see. Bins and boxes, the structural evidence that I hadn’t put away any of my clothes yet. I tried, I really did, but each time I meant to launch an all out assault on unpacking I became distracted. Judging by the dread I already felt at the thought of organizing and cleaning, that morning would be no different.

So I escaped. Looking up the state parks in the area (there are many), my fiancé and I chose the Eno River State Park and headed out. Never underestimate the power of a beautiful day. The heat and humidity of the preceding week had given way to dry air and sunny temperatures in the seventies, and little kids were splashing in the shallow waters of the Eno River down a short trail from the parking lot. Though I was tempted to channel my inner child and splash along with them, we continued down the trail paralleling the river. The river itself was shallow and mostly calm, punctuated by sections of small falls and rapid water running over the rocks. We could even see fish swimming back and forth underneath the surface. We shared the trail with joggers, families, and dog-walkers, but animal life seemed to be lacking. A spooked heron, one snake, but that was it. So we had to head deeper into the park.

The effect was almost instantaneous. As we turned onto a trail into the woods and away from the river, we became the only other people on the path for an entire hour and a half. The woods sported tall trees, well spaced apart and without much undergrowth. Looking in either direction we could see far into the forest beyond. We walked past an old cabin, languishing on a knoll and speckled by the sun, abandoned for over a hundred years but bearing witness to the steady farming this area used to support. Birds reappeared, the usual cardinals and Carolina Chickadees that we can see around Duke’s campus, but also secretive Ovenbirds that run along the forest floor and the rapid drumming of woodpeckers. The birds I expected – Eno River State Park is renowned for the different bird species it harbors – but I did not expect all the snakes. I grew up in Maine. My maximum exposure to the slippery slitheries was limited to foot-long garden snakes that would bolt at the sight of me. The snake we saw sunning itself on a rock in the Eno River was huge, as thick as my arm and at least three or four feet long. Crossing a smaller creek in the woods we froze again to watch a smaller (to be fair, much smaller) water snake raise it’s head from a wet patch of leaves as it sensed our presence. Heading up a steep ridge we nearly walked across another long and dark form, a thinner but still loonngg snake. I’m a lover of the outdoors, but I cannot quite keep my “EEK” reflex in check when I run across one of the little (or big) guys. Hey, maybe it is a primordial response. Once I got over my first gasp and grimace though, I realized the snakes – all different species – have a interesting variety in their patterns. They were not going to hurt me, that I knew, and once I, emotionally as well as mentally realized that fact I could enjoy watching them.

Hunger eventually drove us back towards the parking lot. No matter how many times we head out on hiking trips my fiancé and I always forget to pack snacks. I’m a big fan of snacks. Throughout our trip to the Eno River State Park we traveled on four or five miles of the park’s paths. The best part? There are miles and miles and miles we have left to explore. The park is barely fifteen minutes from Duke’s campus, and so easy to get to. The sunny patches near the river itself are perfect for picnics, and camping grounds within the park are available for those who want to turn their picnic into an all-night event. More information can be found here.

And yes, fresh air and exercise did end up triggering the organizational component of my brain, and I spent Sunday night finally putting my room together. For that alone I want to end with three cheers for Sunday walks! One thought on “Three Cheers for Sunday Walks!”