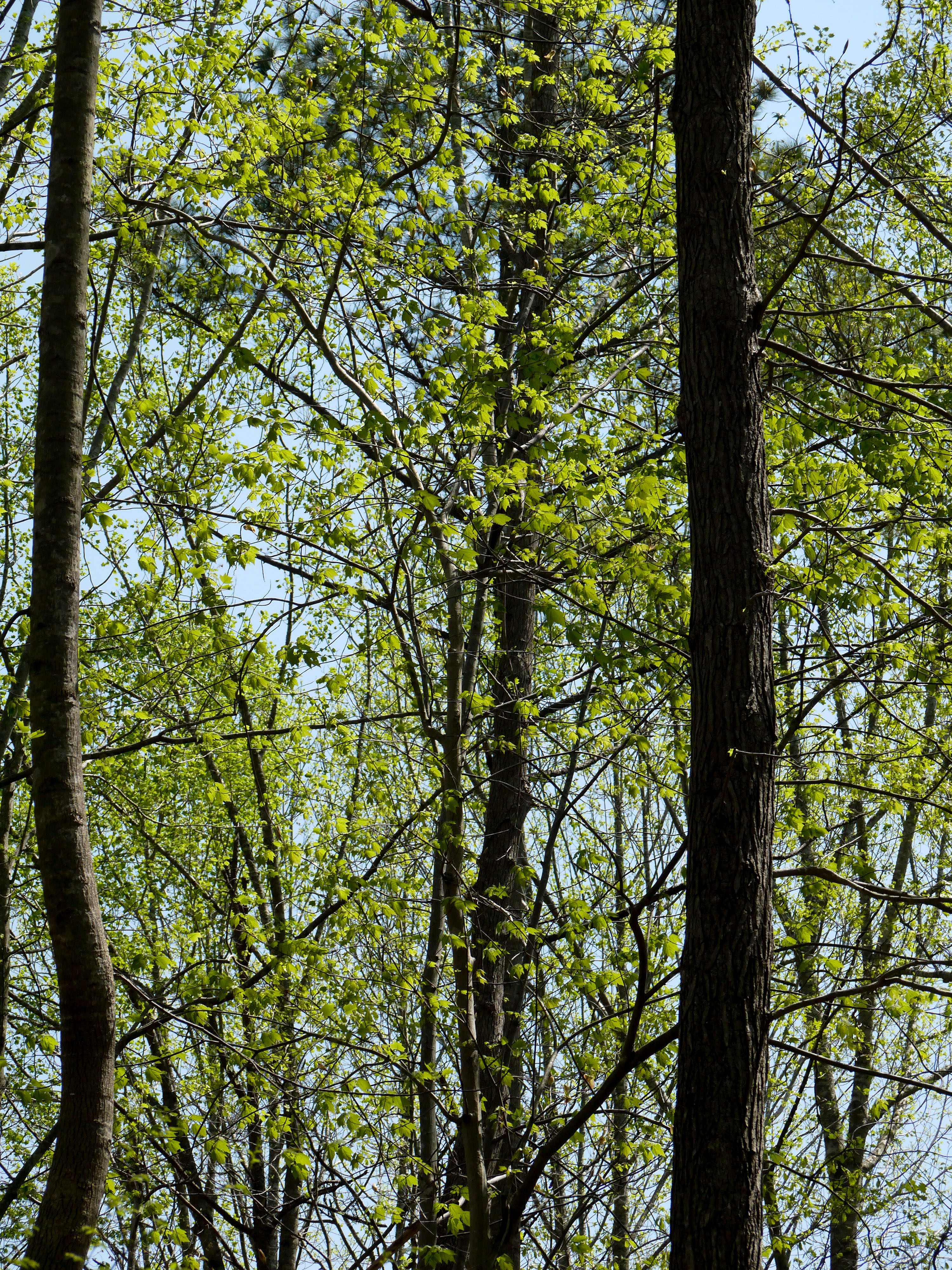 What do you get when you combine a friend’s visit, the last weekend before the end of classes, and a beautiful Saturday afternoon? For me, it all added up to a trip to a nature preserve. The Triangle has many natural areas to choose from, but as I flipped through my copy of the “North Carolina Birding Trail: Piedmont Trail Guide,” the Hemlock Bluffs Nature Preserve caught my eye.

We pulled into the parking area a little after noon, immediately impressed by the large visitors’ center. Toddlers and their parents were doing family yoga on colorful mats on a small wooden deck, and dogs and visitors abounded. I saw my first life bird of the day right next to our parked car, a small gray and brown chipping sparrow. Ca-ute!

Did I say first life bird? I meant only. It’s mid-April now (I know, time flies), and the spring migration should be underway. Hemlock Bluffs has reported nearly thirty warbler species in the past, and I was ready to tick a few off my list. Only, we didn’t see any birds. Those we could hear were so far up in the canopy that they were mere specks, blending in with the new leaves far above us.

Though I saw few birds, there was another taxonomic group that added a few new species to my ‘life list:’ herpetofauna.

As we began to circle the paths of the preserve, we headed down the wooded boardwalk steps to the lowlands bordering the creek. To one side of the path, a five-lined skink enjoyed a delicious lunch of red centipede. Yum.

When we reached flat ground once more, the trail continued on with the stream on one side and the woods on the other. The budding leaves were an amazingly iridescent shade of green that filtered the golden sunlight from above, while tiny, white wildflowers covered the forest floor. It was hard not to stop and just look.

My first snake came on this loop trail. Right in the center of the path, a ring-necked snake slowly slithered away from us and into the leaves, disappearing completely. Its upper body shone black except for a bright yellow – you got it – ring around its neck, almost like it sported some expensive jewelry. I have not always been a fan of snakes, but this one was cool looking and clearly more afraid of me than I was of it.

After making our way back up the many boardwalk steps, my friend and I took a spin around the Chestnut Oak Loop Trail. The afternoon had become hot, and we frequently stopped to rest on the wooden benches that looked out over the bluffs and down onto the stream far below. Though we couldn’t see them, we heard the woodpeckers calling back and forth to each other and whacking their sharp bills into the surrounding tree trunks.

We leaned back on one bench, and I closed my eyes and fought the urge to doze off. Suddenly, my friend started and quickly stood up.

“What is it?” I asked, hoping she had not grown bored of my super slow walking progress that afternoon.

“That,” she replied, pointing to a spot near a stump not far from where we sat.

There, frozen in the sun with its head off the ground, was my very first poisonous snake, North Carolina’s copperhead.

If you’ve never seen a copperhead, this is one camouflaged creature. Coming in shades of brown and tan, we probably never would have spotted the snake at all if he had not moved and rustled the leaves ever so slightly beneath his sleek body. As far as snakes go, this individual didn’t look particularly menacing, but I had been warned enough times to convince me to keep a very safe distance. I felt a little in awe, a little like I had made some amazing discovery.

While I may not search for snakes and skinks as avidly as I do for birds, my two miles in the Hemlock Bluffs Nature Preserve reminded me to not only search the canopy for wildlife, but also listen to the crackling foliage on the forest floor – the tell-tile sign of a moving snake or lizard. Let’s be honest, I’ll probably start a life reptile list too. Three species down, so many to go!