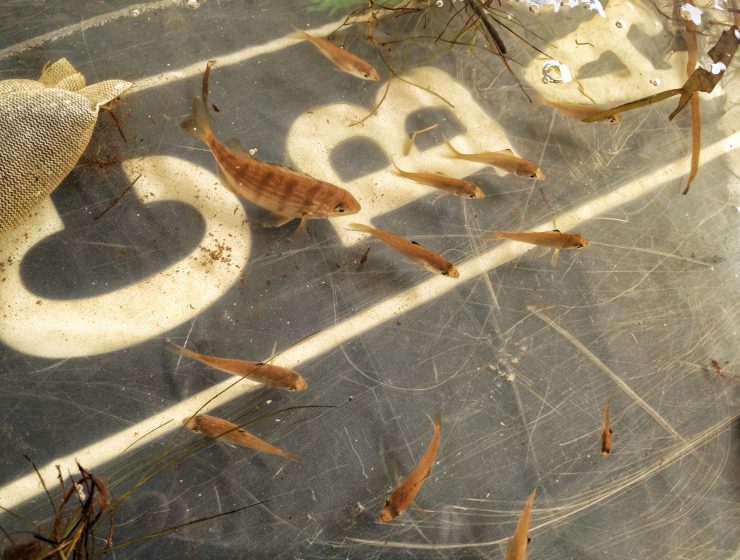 Over two Saturdays in October, I was partially in charge of the Choctawhatchee Basin Alliance brackish water touch tanks in back-to-back outdoor festivals in the Florida Panhandle. Theoretically, I knew what to expect: preside over the top of the tank, explain things to passing kids, and keep the critters alive. The experience was so much more than I anticipated, both for me and those we spoke with at the festivals.

In the morning before the events, CBA staff met at the edge of the water, seine nets ready and waiting. With someone on each side, CBA members waded into the shallows, periodically using smaller dip nets to capture the fish and crabs and move them into plastic buckets. As a last step, all the bucket contents were combined into a long, clear tank, complete with multiple bubblers and even ice packs to keep the water cool and comfortable for the native species during the multi-hour public events.

During the first Saturday – at the Explore the Outdoors festival – one of my co-workers and I arrived halfway through to relieve those manning the booth during the initial part of the event. It was crazy. Over the ensuing two hours, people streamed by in a constant flood, kids after kids after kids lining up, from toddlers all the way to teenagers.

At the onset, I felt overwhelmed. I had only worked with kids directly once before at a structured field trip, and now students of all ages crowded around with a multitude of questions about minnow species I had learned to identify only minutes before. I tried to answer their queries while preventing some of the boldest kids from accidentally crushing the minnows or dropping the crabs outside of the tank and onto the dusty ground. Still, after awhile I began to relax. I easily remembered our silverside minnows, our mud crabs, our blue crabs, our snapper species. Using that freed-up brain space, I was finally able to really listen to the children walking by, helping to scoop creatures into their waiting hands, and smiling with them as they felt the fish fins or claws of the crabs tickle their palms.

The best part? They were so excited! Many had no idea our bayous held toad fish (which look like tadpoles) or that tiny snappers grow to maturity in the bay before eventually living out their adult lives in the Gulf of Mexico. Some refused to leave the side of the tank, even after their parents had to insist multiple times. Others regaled me with tales of other fish and crabs they had caught with their friends and families, clearly outdoorsmen and women in the making.

The second festival – Coastal Dune Lakes Day at a local state park – was slower, which meant we could spend more time interacting with each and every person who walked up to our table. Here we could explain the biodiversity differences between the fish we caught in the dune lakes and those from the bayous, identify all species in the tank, and discuss which ones would get bigger and which ones would remain tiny and why.

Both experiences felt exhausting when they were over, but rewarding. For many kids, attendance at festivals is the first time they are exposed to live native species, and they remain inspired to learn more in their everyday lives. At the very least, we remind children and adults alike that we share our beautiful Choctawhatchee Bay with hundreds of other species, many iconic and others cute and fun. If you have an opportunity to run or experience a touch tank for yourself, I highly recommend it!