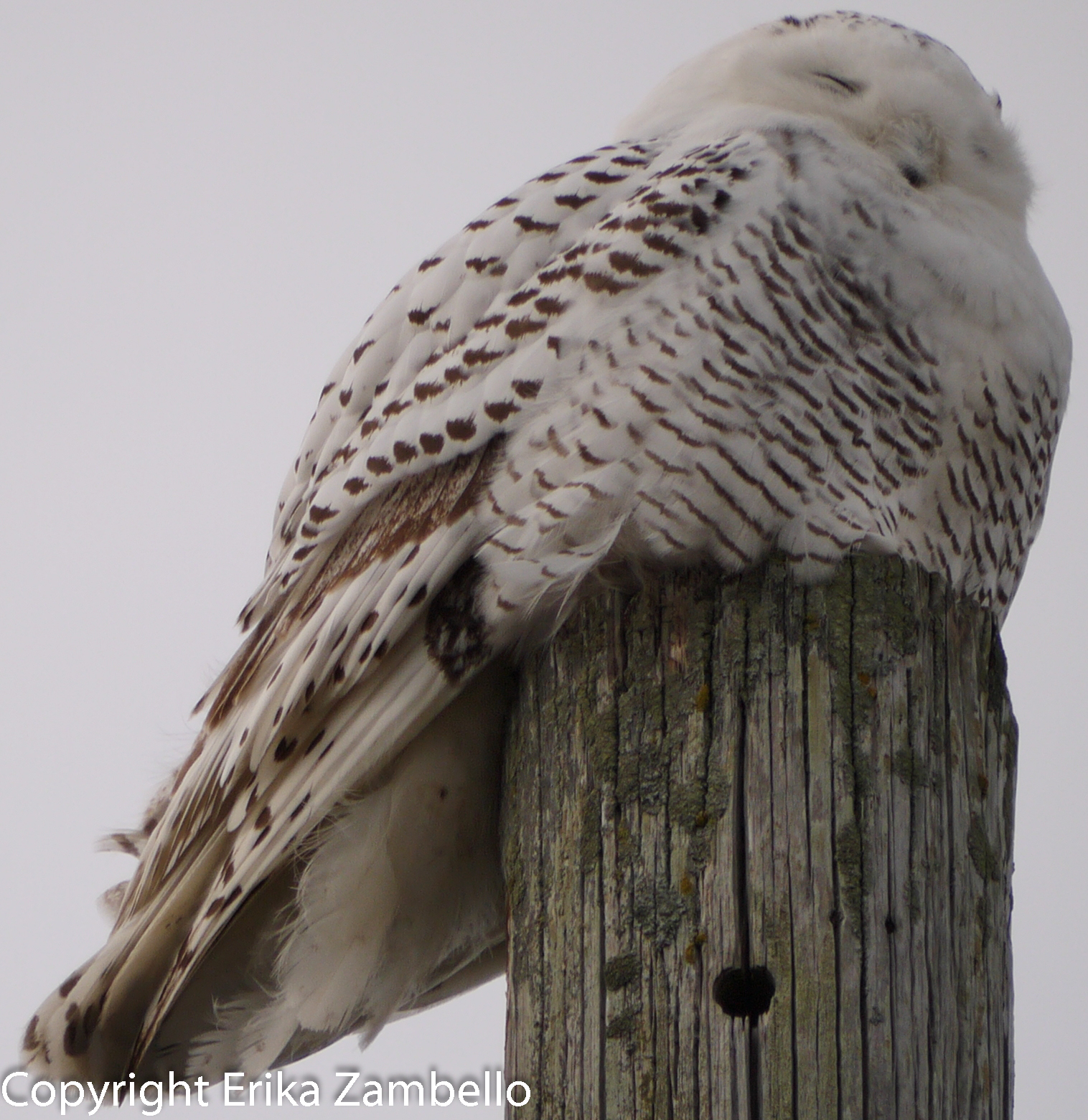 Happy New Year! I ended 2014 and began 2015 in Maine, where temperatures shifted from the warm mid-forties to the bitterly cold single digits. Regardless of the weather however, Maine is always beautiful, and I was lucky enough to spend some time on the rocky coastline.

Biddeford Pool is a well-known birding spot for any and all birders who live in Maine. It is a frequent haunt of Snowy Owls, even in years when they are not commonly seen. I had yet to see a Snowy Owl for 2014, so the day after Christmas my family and I hopped in the car and drove thirty minutes to reach these hallowed birding grounds.

In the winter of 2013-2014, it was easy to see a Maine Snowy Owl. They were everywhere, on houses, at the airport, along the road, at the edge of the ice, even on urban Portland streets. This winter however, their numbers have returned to normal, and those who want to see one must really look.

The first step to any good owl search is to stop at the harbor area, and peer at the rocks as well as the chimneys and lampposts. Even when Snowy Owls are not present, there are often other seabirds and waterfowl fishing in the shallow waters. That day we saw nothing, and drove on.

Having little luck in town, we parked at the entrance to East Point Sanctuary, an Audubon preserve on a grassy point overlooking the shore in multiple directions. Black-capped Chickadees twittered at us as we walked through the small woods, past a golf course, and onto the point. No owls were immediately visible, but the ocean was full of other avian life. Near the rocks a Long-tailed Duck dove and splashed, as did Common Eiders. Farther out a huge raft of eiders, scoters, and cormorants swam together, identifiable only to those lucky enough to bring their spotting scopes.

Though we had not brought ours, another pair of birders had set up a scope to observe the raft far out at sea. Sidling up to them, I simply asked, “What have you seen?”

They were friendly, and instantly told me about the multiple species bobbing in the waves. And then, they uttered the magic words, “There’s also a Snowy Owl over there.”

“WHERE?!” I cried in my mind, but managed to calmly ask if the owl was close.

The couple pointed at a nearby island, which sported a beautiful lighthouse as well as a large historical home. Apparently the Snowy Owl sat on one of the chimneys, but it was way too far away for me to see with the naked eye; even with binoculars I could not make out its shape.

It didn’t take a psychic to tell what I was thinking, what I was earnestly hoping for. Noticing my predicament, the man asked, “Would you like to use my scope?”

Would I? YES. He swung the lens around, pointing it at the left chimney of the building. I looked through first, and sure enough there it was, a large white owl relaxing right on the roof. I had seen my first Snowy Owl of 2014, with only five days left in the year!

My family looked next, and it was the first Snowy Owl my brother and my fiance had ever seen. I took one last look, and then gratefully turned the scope back to the couple, thanking them profusely and marveling at the little generosities people are capable of everyday.

I had seen the Snowy Owl in 2014, but could I possibly go two for two over the holidays and see another in 2015? I returned to East Point Sanctuary on January 3rd with my favorite birding buddies, my mother and grandmother. We brought our own scope this time, and, unbelievably, the Snowy Owl was still on the island across the way. Not only that, the owl was perched on the very same chimney!

Yes, I am thrilled that I had the opportunity to see a Snowy Owl for both my 2014 and 2015 birding lists. But much more than that, I am happy to know that such a creature is there, and can be observed throughout the winter season. I hope many more birders see the Snowies, but also non-birders, students, and children. Once you see one, you’ll never forget it!