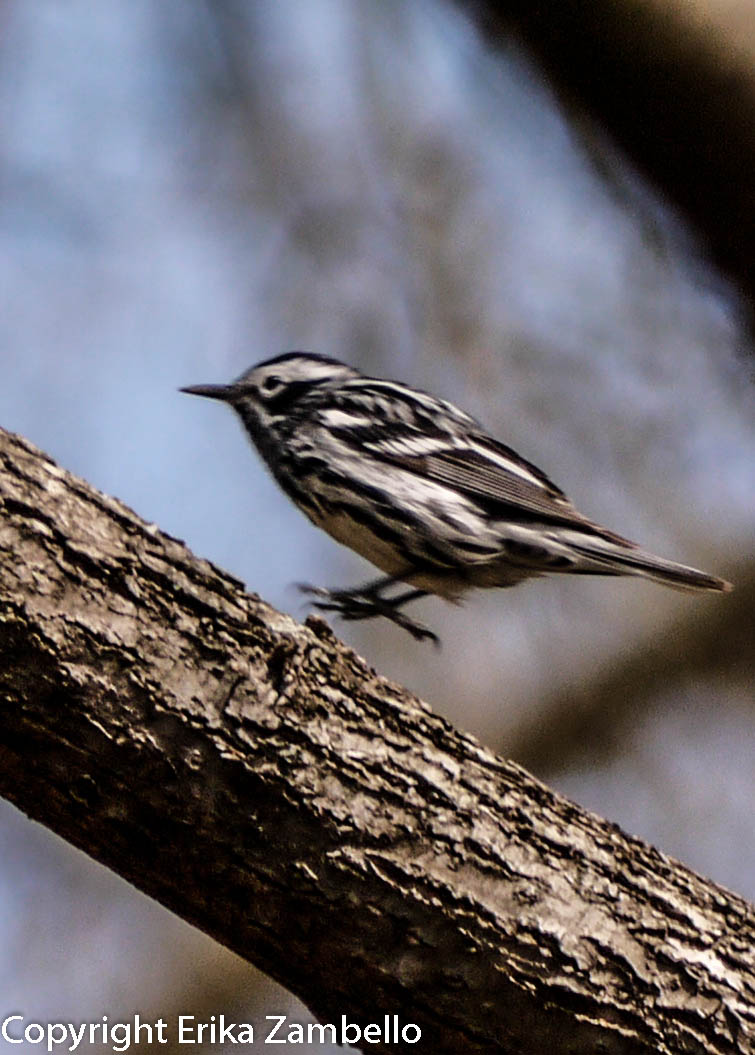 We are now in the throes of spring migration, and many wintering species have begun their journey north, while neotropical migrants have arrived from their cold winter homes in Central and South America. It is a time of change, vibrant activity, and of course, breeding.

First, it was time to say goodbye to the varied waterfowl and seabirds that have dotted North Carolina’s freshwater lakes, ponds, marshes, as well as the coastline all winter. To see a few final species, two fellow MEM students and I woke up early on a Sunday morning to visit Umstead State Park, a known waterfowl hot spot. The lake itself was large, bordered by beautiful forest just beginning to bud and turn green. In the summer the park will be bustling with people and boaters, but in early April we had the park to ourselves.

It didn’t take long for us to spot our first bird, a lone female Bufflehead preening and diving near the boat ramp. Continuing along the trail that borders the lake, we spotted more Buffleheads, as well as Ruddy Ducks, Double-crested Cormorants, Pied-billed Grebes, and of course, the ever present Canada Geese. As we neared a marshy area, full of golden cattails waving in the breeze, three ducks suddenly spooked and took off towards the other side of the lake. Their green heads caught my eye, and when I raised my binoculars I practically squealed in delight: I was looking at Green-winged Teal!

I have only seen one other pair of Green-winged Teal in my life, and they are beautiful birds. While the females are brownish overall, males in breeding colors are slate gray with cinnamon colored heads, one thick green stripe extending from their eye to the back of their heads.

As we walked back towards the parking area, another pair of ducks arrested my attention, looking slightly different than the regular Mallards we had seen dotting the water. I was right in my curiosity: I had in my sights two Blue-winged Teal! Not bad for a morning of birding, not bad at all.

Since then most of the waterfowl have taken off, but the warblers have begun to arrive! To find them I took out my copy of North Carolina Birding Trails, and zeroed in on a small preserve in Durham: 17 Acre Wood, owned by the Ellerbee Creek Watershed Association. The main trail borders the small Ellerbee Creek, and is a natural oasis amid suburban neighborhoods.

Though it was midday, a friend and I heard birds immediately. I saw a Brown Creeper skulking up a tree trunk, an Eastern Phoebe bobbing its tail, and numerous White-throated Sparrows. I love all those birds, but they were also species that had been present all winter. It wasn’t until I saw a black and white-striped form running up and down a tree branch that I knew spring migrants had truly arrived.

The Black-and-white Warbler is striking, its plumage reminiscent of zebra’s stripes. It acts like a nuthatch, searching for insects in the bark as it hurries up and down tree trunks and around branches. They spend the winters as far north as Florida, and breed across the Eastern United States in the warmer months.

A Common Yellowthroat was the next warbler on my checklist that day, and I marveled as I always do at how they look like little robbers with black masks covering equally black eyes. Though I never actually saw one, I also heard the buzzing call of dozens of Northern Parulas. Though many yellowthroats will overwinter in the Southeast, these Northern Parulas were coming from the southernmost tip of Florida and Central America!

More warblers and other migrants will be arriving in the month ahead, breathing new life into all birders. Though I love looking for waterfowl in the winter, I am ready to hang up by snow boots in favor of some warm weather birding!