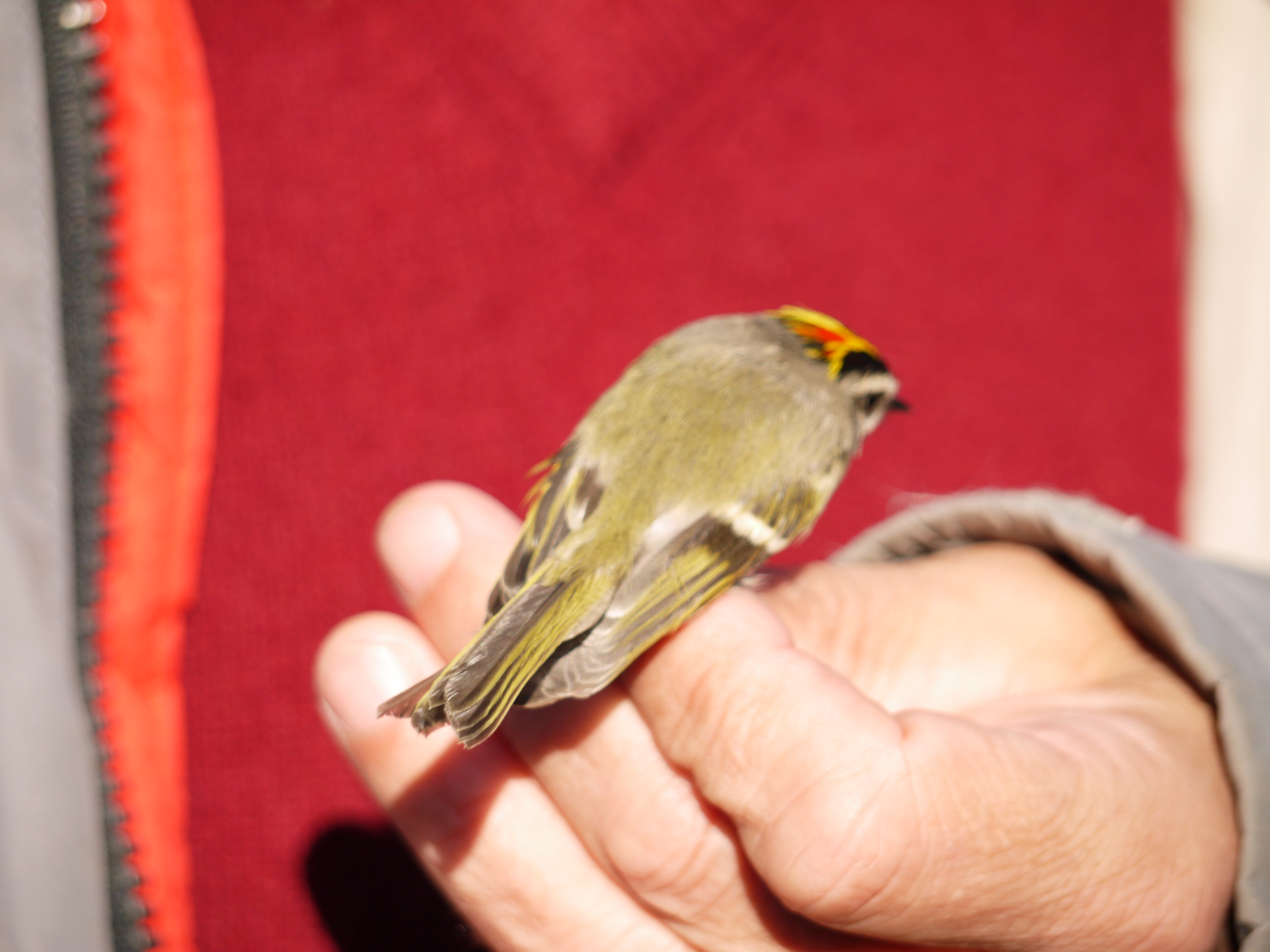 “When we walked in fields of gold,” lyrics popped into my head as I and a group of NicNats shut our car doors and walked towards the Prairie Ridge Ecostation in Raleigh early one Friday morning. We were there for three hours of bird banding, and the field ecostation was truly shimmering in the morning light. Birds were everywhere, calling, eating, looking at us curiously and, hopefully, running into a few mist nets. As most of us were beginners, we wouldn’t be doing any of the actual delicate work of untangling birds from the mist nets, banding them, or taking their measurements, but this was a unique opportunity to see birds up close and I was thrilled. Our demonstration began with the mist nets. Set up a little like volleyball nets in mowed sections of the field, the nets are incredibly fine and were very difficult to see even when we were looking for them. More than one of us had zippers or jacket sleeves caught, and we had to carefully disentangle ourselves to avoid ripping the expensive netting.

Our first bird of the morning was a field sparrow, released from the net just a few minutes before we arrived. Sparrows look remarkably similar to each other, and I have such a hard time telling them apart that I honestly don’t even try. The bird banders however, volunteers who have been extensively trained before being allowed to handle the birds on their own, had a few field guides on hand to make the identification process easier. If even they couldn’t identify the species? Then they would release the bird without taking any measurements: “No data is better than bad data,” one of the PhD students intoned seriously. Our little sparrow was a field sparrow, not so shocking considering we were, well, in a field. The banders measured wing span, weight, and beak size using carefully maneuvered instruments. To identify sex and fat storage, the banders would blow apart the feathers looking for male versus female organs, or yellow sacs that indicated fat storage. Age was even more difficult. To determine the age of a bird like the sparrow, one has to blow apart the feathers on their skulls. Underneath the feathers are specific dot patterns indicating cranial development: if you recognize the pattern, you can tell the age of the bird. No wonder being a bander takes such intense training! Once we had watched an entire measurement session, we witnessed what was to be my favorite part of the whole morning, watching one of the Nic students release a bird. After carefully listening to instructions on how to correctly hold the bird, the students – undergrad, masters, and PhD students were all represented – would slowly release their hands and after a moment the birds would be off, flying back into the safety of the field or the foliage complete with a shiny aluminum band attached to one leg. All bands come from one location, and each banding station has to apply for a limited number of licenses to use them.

After the bird was released, we split off into groups to follow individual banders for closer looks at the process. My group followed our bander to the edge of the field where  a mix of deciduous and coniferous trees grew. The net was strategically set between a stand of these trees, and there, wriggling ineffectually, was one of the tiniest birds I had ever seen. Kinglets are teeny tiny songbirds, measuring only three to just over four inches and making chickadees look huge. There are two species of kinglet, and the golden-crowned little guy in front of us was an especially rare find at this ecostation, as they don’t usually prefer field habitat. With a gray-green body, black and white eye streaks, and a bright yellow and orange crown (hence the name), there was no doubt that this little kinglet was stunningly beautiful.

Following the nets at the edge of the field, we also picked up a ruby-crowned kinglet, Carolina Wren, and two White-throated sparrows. Each was plopped gently but unceremoniously into white drawstring bags,before we rejoined the group back up at the measurement station. The other groups had also caught quite a few white-throated sparrows, plus another ruby-crowned kinglet and an eastern towhee. Suddenly I was like a kid in a candy store, running back and forth from bander to bander to see the birds up close.

And then, came the best moment of the morning. I was chosen (okay, I asked) to release a bird. The bander held out a Carolina wren, instructing me carefully on how to hold the head between my index and middle finger while grasping the bird’s legs underneath. When I was ready, I released both head and legs, and the wren balanced for just a moment on my palm before taking off like a shot into the field, disappearing behind the golden grasses. I have seen hundreds of Carolina wrens, but for just a second I actually felt its feathers and its weight in my hands. It’s a powerful feeling!

All too soon we had to head back to campus and classes that could only seem mundane after our morning at the Prairie Ridge Ecosystem. I have been birding for almost a year now, but bird banding gave me a completely new perspective both on the scientific data being collected and on the birds themselves.

Obviously, I loved it. To anyone who has the opportunity I say definitely check out or volunteer at a bird banding station!