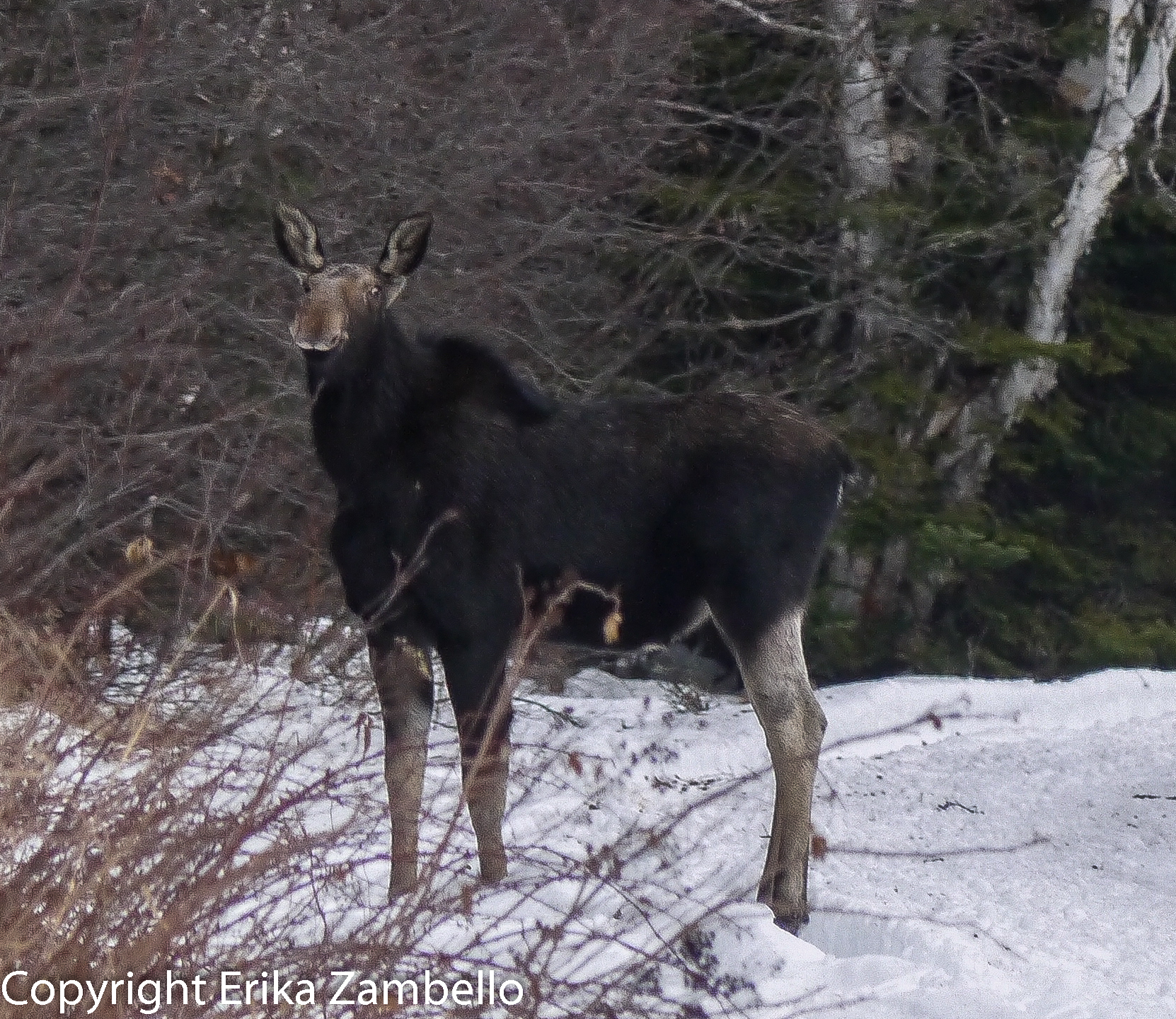 Moose are an iconic species in Maine. They are the inspiration for thousands of stuffed animal variations, paintings, photographs, sculptures, even chocolate shapes. Yet, they can be difficult to see in the summer, and even more difficult in the winter. In fact, I had never seen a moose between the months of October and May. That is, until this year.

I was spending three days in the mountains of northwestern Maine, on a secluded lake miles from the nearest town. Few people visited during the snowy months, and we saw no one other than the occasional snowmobile group. That is how we prefer it however, and we reveled in the idea of a few days in the woods.

We arrived in the early afternoon, taking time to schlep our stuff in, turn on the water, and crank up the heat. As the camp was warming, my fiance and I set off down the road to explore. Bordering the lake, the road was packed down enough to easily walk on, and provided excellent views of the water and the mountains beyond. Running into a group of snowmobilers, we politely said hello. Normally we would just walk past, but this group had an important message for us: they had just seen a moose.

Moose move quickly, and I doubted we would see one if four snowmobiles had just spooked it. Still, we hurried along just in case. At one point the road cuts across the lake itself in a man-made causeway, and we saw what I think was a small otter taking advantage of the open ice the causeway created to fish. The sound of snowmobiles in the distance didn’t seem to bother the creature; on the contrary, he stood up on his hind legs to sniff the air, curiously watching us as we continued walking.

On the other side of the causeway the road once again winds through woods dominated by conifers. It was quiet save for the sound of the wind and our boots crunching on the snow, a quiet you just can’t experience unless you are away from people and the sounds of civilization.

At least, it was quiet, until the sound of my gasp broke the serenity.

“Brian,” I hissed, motioning my fiance over. When he didn’t hear me, I raised my voice, “Brian, BRIAN.”

Finally he turned, “What?”

Pointing around the corner, I mimed a pair of antlers, “There’s a moose over there!”

The moose was large, staring right back at us 100 feet down the road. However, all moose are large, and this one was probably only a yearling. Her (we’ll assume the moose was a female) coat was dark brown and shiny, and she looked quite healthy. Moose are strange-looking creatures, lacking the grace of deer or elk. On long, spindly legs their huge bodies rest, and their noses are large and broad. Still, they are powerful creatures, which the males’ antlers clearly illustrate. Though she did not sport such antlers, there was no denying her size and strength. If the moose we saw was actually a female, she will eventually weigh more than 800 pounds. If in fact our moose was a male, he could tip the scales at upwards of 1000 pounds.

For a few moments, we just stared at each other, each unsure what to do. I have seen many moose, but almost never on foot. Normally we spot them while driving in the car, or silently paddle past them in kayaks. Even if I had seen one while walking, they never, and I mean never, just stood there looking back at me. What kind of strange standoff was this?

A brief glance around would give me my answer. The road was covered with moose prints and moose droppings, indicating a regular presence. Clearly the young moose had discovered how much easier it was to walk on the road compared to the deep snow, and had chosen this spot to spend a lot of her time. She wanted to walk past us, and we wanted to walk past her.

Eventually she turned and trotted off down the road, disappearing behind another corner. We walked on, assuming she had disappeared into the woods. Yet barely two minutes later there she was again, farther down the road but still staring back at us with her big brown eyes. She trotted towards us, then stopped, then began trotting towards us again.

I began to feel wary, nervous even. You don’t grow up in Maine without hearing stories of moose chasing after people, and though very rare it does happen. My own mother, while pregnant with me,  had hid behind a tree during the rutting season to avoid a big bull moose! It was time to get out of this moose’s way.

Tracking twenty feet through the woods, we hopped a fence into the yard of a cabin, reasoning that the trees in between us would give the moose cover, and the fence would at least slow down a moose if she started to come this way. Waiting, we heard nothing but our own breathing. Minutes ticked by, but still the moose did not appear. Perhaps she really had turned around.

We waded through the snow back to the road, and sure enough we couldn’t see her. Shrugging, we began to walk again, when she startled us both by suddenly appearing. Humans and moose both jumped back, surprising each other. Though she moved away once more, I had had enough. This was her home, her habitat, and if she wanted to get by, then I was going to let her! We returned to the house, me looking over my shoulder every thirty seconds to see if she was following behind.

The next day we all saw the moose again, and repeated our strange standoff. I felt more secure with more than two people in our group, but we made sure to let the moose pass us when she wished to (which was twice). The final two days of our visit she disappeared, perhaps becoming fed up with the human and snowmobile traffic, perhaps feeding in the woods off the road where she was well-camouflaged.

Seeing this moose has been one of the highlights of my year. I believe it is important to be awed by wildlife, and awed I definitely was! Moose populations are declining in certain parts of the United States, so much so that hunting has been suspended in Minnesota and other areas. New Hampshire moose populations have also taken a hit, as warmer temperatures have increased the number of winter ticks that literally suck the moose dry and drive them mad. As of yet, the moose population in Maine has remained stable, where I hope it will stay. Still, we must keep accurate moose counts, carefully control hunting permits, protect their habitat, and try to curb climate change for these most impressive creatures.