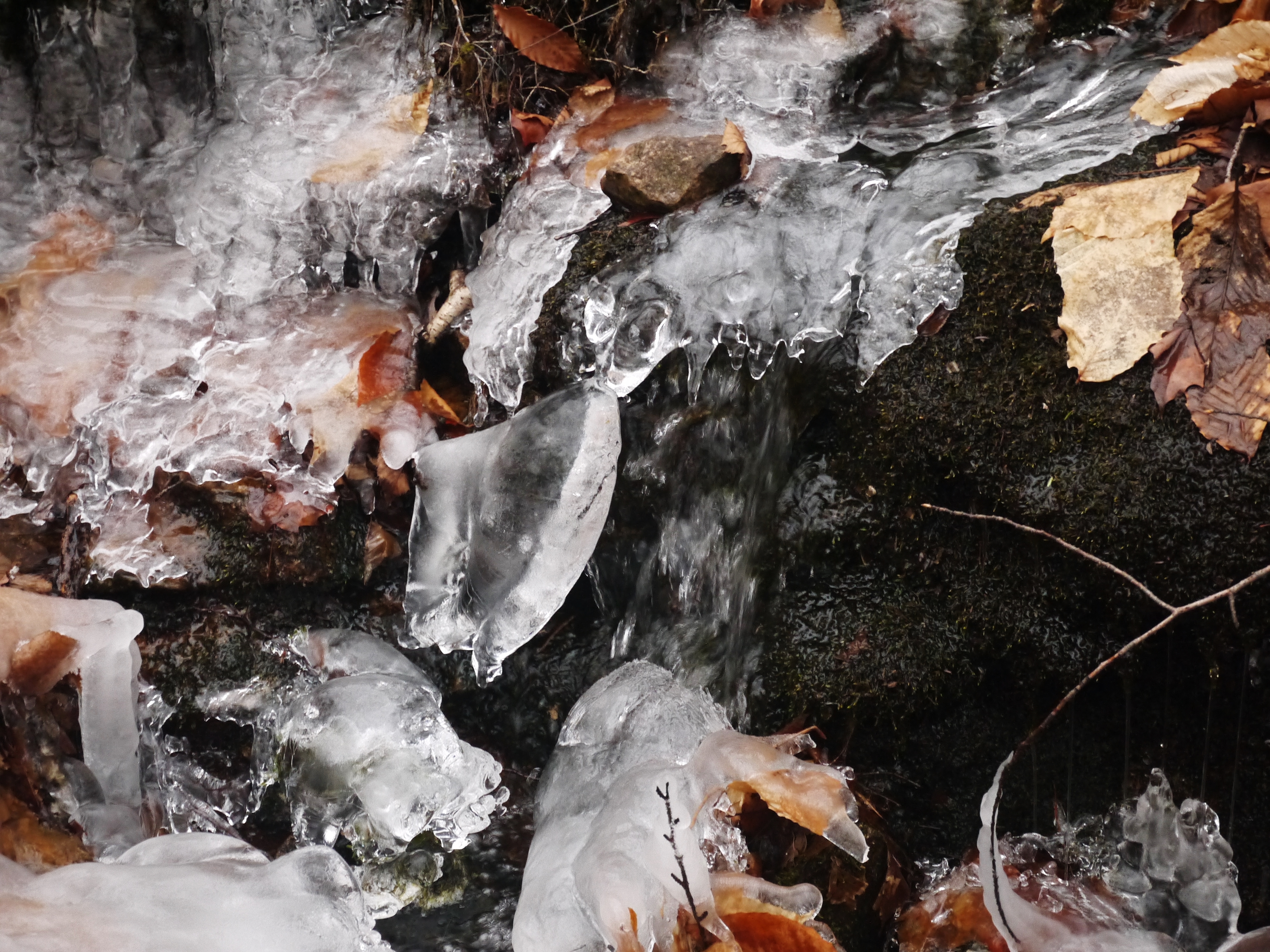 It was ice cold as we headed out into the woods of the Hubbard Brook Experimental Forest. I’m a New England girl, so I was prepared: leggings under jeans, snow pants, a ski jacket, and a huge faux fur lined hat. No, I was not at all fashionable, but at least I was warm. I was volunteering for two days at Hubbard Brook in New Hampshire, where my mother worked. A study needed me, a study that needed a host of staff and volunteers to test the effects of  a changing climate – in this case warmer temperatures and increased occurrence of soil frost – on foliar litter decomposition. Our biggest adversary? Winter itself. Hubbard Brook is arguably one of the most famous ecological research sites in the world. This experimental forest is famous not only for first discovering the existence of acid rain in the late 1960’s, but also for long term studies on the effects of global climate change and extreme events on northern forests. As we set out towards the research plot, flags and tree collars set the boundaries of other parts of this complex study – officially called CCASE, or Climate Change Across Seasons Experiment –  in different stages of completion. The first step in our sub-plots was stringing the boundaries and cross-sections of each small area to get ready for the insertion of the delicate mesh bags that held the carefully labeled and weighed leaf litter. Why was the winter our adversary? The mesh bags needed to be placed away from the exposure of snow and rain, and the ground was already frozen. Kneeling against the patches of leaves and snow, we gently pushed away the surface litter until we hit the ground beneath. Frozen it was, but there’s always a Plan B. Though it was impossible to dig under the packed ground – and we would have had to do it 500 times for the 500 litter bags – the leaf litter layer was just deep enough to slip the bags underneath, safe for the winter, and restoring it to the site where it would have been anyway had the Hubbard Brook staff not intercepted it last fall in the first place. Two people were of little use in stringing the plots, so while my mother quickly readied the plots for the long day tomorrow, I set off into the woods to explore. Exploring any forest in the winter, alone, should always be done cautiously, so I stuck to the wide path that sloped upwards and led to other research plots deeper in the woods. Though there was little snow, the air was wet, and ice had formed in rivulets along the hill and along stream beds. Hubbard Brook is tucked into a corner of the White Mountains, and is a beautiful place to do research or just hike. I was reluctant to retrace my steps, but the sun would set just after four and I have an unfortunate habit of getting lost. After a night sleeping in the dorms of Hubbard Brook, we were up early to take advantage of December’s short daylight hours. We were a four woman team that day: me, my mother, and two of her colleagues. Each of us had a task, and we pursued them with dedication and efficiency. My job was (luckily) inside. There were 500 mesh bags of red and sugar maple leaves, exactly 3 grams each and stacked neatly together. Each bag had to be placed in exactly the right spot, in exactly the right research plot. That’s where I came in. Excel spreadsheet in hand, I pulled on a pair of latex gloves (so as not to contaminate the bags with my own personal chemical dandruff) and carefully marked plastic sandwich bags with each and every one of the numbers of the mesh bags before carefully slipping the plastic bags over the mesh ones. As I worked, my mother ferried the completed and labeled bags out to the research plots, where her two colleagues brushed the leaf litter back and carefully placed and tied down each sample. It took me all day to label the bags, and after night fell again on Hubbard Brook a fourth of the plots had successfully received their mesh bags. Though my two days at Hubbard Brook were over, the other women had more hours outside in the cold completing the study site. I was impressed! Once they had finished, the control plots would be left alone, while the experimental plots would be either warmed  with delicately buried wires that would heat the soil, or warmed and exposed to a series of winter freeze-thaw cycles. These experimental treatments, simulating future climate conditions, are expected to cause a cascade of effects on the carbon, nitrogen and nutrient cycling at this forest.

The study will no doubt unravel some of the effects of warmer winter temperatures that the Northeast has experienced in the past decade, but this last step is only one of the many that it took before results could even be contemplated. The leaf litter was collected, weighed, and placed in the above mesh bags. Each mesh bag had to be individually sewn and fishing line tied to the corner in order to allow researchers to fasten each bag to a plastic stake to hold it in place for the years to come. All this before we had even arrived last Sunday to label the bags and place them neatly in the woods. This was no small effort folks. The results of such studies can be momentous. Much of our understanding of the ecological world has come from intricate studies such as this one fastidiously carried out and analyzed. But it is important not to forget the hours and hours and hours of labor that it takes to set up and monitor each and every project that Hubbard Brook, and research sites all over the world, undertakes. The importance of the time devoted by the staff, volunteers, and yes, us graduate students, to the final results of these projects cannot be underestimated. Going forward in my own studies, I’ll definitely remember the amount of effort it takes to run even a simple study. Thomas Edison was definitely right when he wrote that “Genius is one percent inspiration and ninety-nine percent perspiration.”