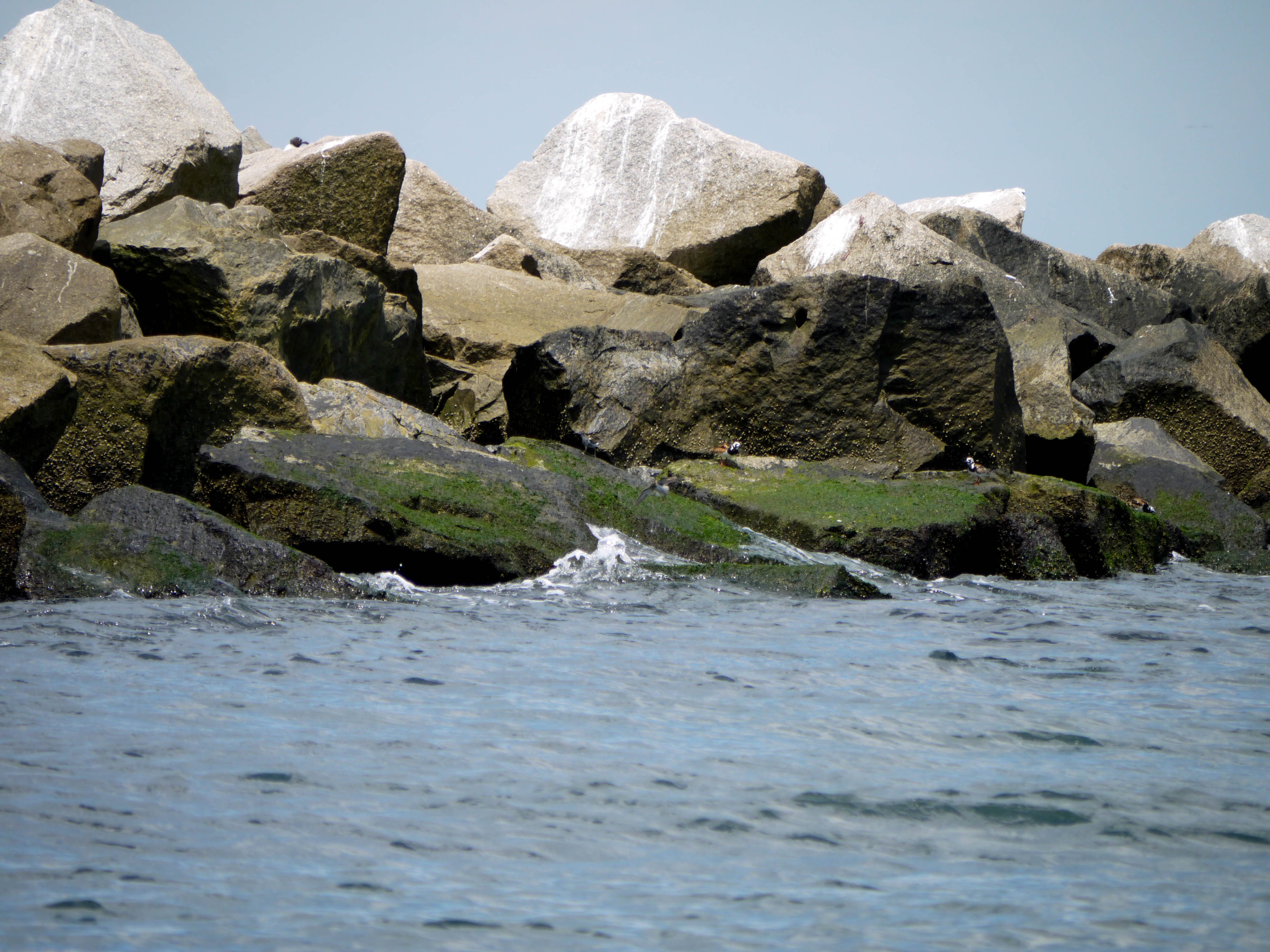 The pile of rocks didn’t look like much. Located where the Chesapeake Bay Bridge-Tunnel changes from the above-ground bridge to a tunnel beneath the ocean, the rocks border the large channel that shipping and military vessels used to leave the bay. Far from shore, the rocks were near nothing but salt water and the bridge itself, yet when we reached the rubble-edged channel the stones were full of avian life, while the channel itself was full of fish and other creatures.

We were there to fish, capitalizing on the man-made reef that is the Chesapeake Bay Bridge-Tunnel. Though I was fishing, my eyes were drawn to all of the birds that were calling and flying on the rocks near which we had anchored. The Ospreys were also there to fish, and as we watched they circled slowly above. Suddenly, one would pull its wings in and dive headfirst into the sea, disappearing for a moment in a splash of spray before beating its wings to rise above the surface – hopefully with a fish grasped tightly in its claws. I watched one pair dive over and over, successfully and unsuccessfully nabbing little fish. Ospreys were once quite endangered, and seeing them healthy and strong was a real pleasure.

Royal Terns rested on the rocks or flew across the ocean looking for fish. They are among the larger terns, and their calls mixed in with the black-headed Laughing Gulls that also dotted the large stone jetties. Royal Terns dive for their food, but as they are smaller and lighter the effort required to lift themselves off the surface is not nearly as great as that of the Osprey.

Diving birds were not the only feathered critters out in the ocean. Back from their breeding grounds in the northern latitudes, tiny shorebirds bounced here and there among the crevices, feeding on minutiae I could hardly see. Spotted Sandpipers made up the larger variety, while Least Sandpipers – barely 5 inches long – comprised the smallest. Ruddy Turnstones, who sported breeding colors of deep copper, white, and black, also ran among the rocks while emitting their signature peeps. It’s no wonder I had trouble concentrating on my fishing line!

My favorite bird by far, however, was the American Oystercatcher. These birds look almost comical with their black and white bodies, yellow eyes, and bright red bills, and their high pitched squeals are unmistakable. The oystercatchers I’ve seen in the past are shy and skittish around people, but the oystercatcher picking at bivalves out by the bridge was unperturbed by our aquatic presence, and so I could finally have a good long look at this iconic species. True to its name, the oystercatcher slowly flew from rock to rock, sometimes submerging its entire head in order to pull up oysters, mussels, or clams.

Birds weren’t the only species of interest. Fishermen and women in this area pull up all kinds of fish, including eels, red drum, pufferfish, cobia, and skates (a type of ray). Though I love to see different kinds of fish, they don’t hold a candle to another underwater creature that calls the channel home.

I had missed it the last few times I had been on the boat. They appear and disappear in the blink of an eye, leaving behind only bubbles and a faint outline. However, on my last trip I finally saw the famous, the beautiful, the silent Loggerhead Turtle. Loggerhead Turtles are the most common sea turtle in Chesapeake Bay, but I had never seen one. When I finally saw my first it was huge, swiveling a head that was as large as mine around at us before disappearing under the waves. The turtle I saw was at least four feet long, one of a pair frequents the channel, likely drawn by the same influx of food that popularizes the bridge with fishermen and birds. To see a turtle that large in the wild is breathtaking.

The rocks don’t look like much, but near them one can find an impressive plethora of life. It’s true then, never judge anything by first impressions alone!