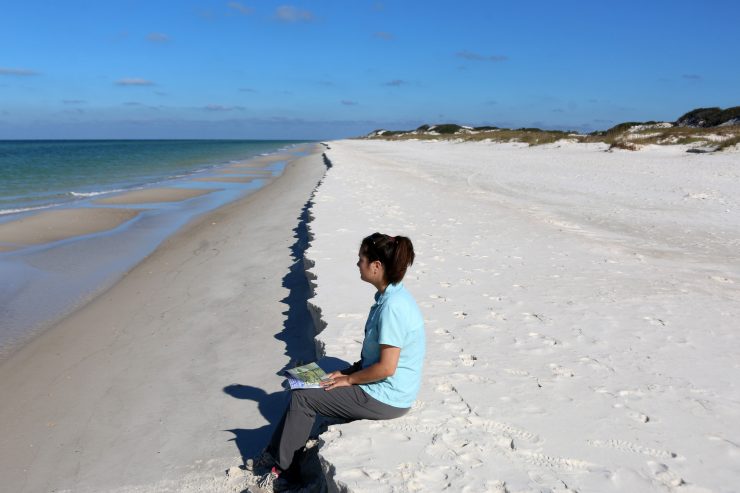 I’m a goal-oriented person. When I suggested to the Florida State Parks staff back in 2015 that I could write about visiting all 175 state parks, trails and historic sites, I lodged the goal in my psyche with such force that even after my freelance contract with the parks ended, I remain determined. In December, I officially crossed the three-digit threshold, and my current total stands at 101.

Wallace Stegner once wrote that “National parks are the best idea we ever had. Absolutely American, absolutely democratic, they reflect us at our best rather than our worst.” I feel the same about state parks.

In the early 20th century, sites around Florida began to earn protected status, from the Olustee Battlefield near Jacksonville, where Florida’s largest Civil War battle took place, to Highlands Hammock in the center of the state. With the onset of the Great Depression, Franklin Delano Roosevelt authorized spending for the Civilian Conservation Corps in 1933, and suddenly Florida had the opportunity to enlist strong young men to improve park areas and build recreational facilities.

The same year, the Florida legislature “quickly passed a law directing the Board of Forestry to ‘...conduct investigations and make surveys to determine the areas of land in the state which are available and suitable for reforestation projects, state forests and state parks.’”  Two years later, the modern Florida State Parks system was officially established.

When rationalizing my continued efforts to see all 175 state park sites – which now include quite a bit of travel, as Florida is a big state – I am drawn to the idea of seeing a system in its entirety. How does one manage a tiny historic site like the Yulee Sugar Mill, covering barely 6 acres, plus the nearby Crystal River Preserve, which encompasses more than 27,000 acres? What flora and fauna are protected when historic battlefields or ancient shell middens are preserved? What fellow explorers do I meet while hiking the trails at Torreya versus those swimming at Grayton Beach?

Moreover, the history of park creation itself is a reflection of the citizens of Florida from 1935 through today. What did they want to protect? Beaches for sure, but also interior tracts of pine forest, historic homes, mangroves and so much more. The Sunshine State has a robust camping culture and the thousands of campsites at state parks are the lifeblood of that outdoor-loving population. Seeing the entire collection also allows me to look to the future – what should be protected next?

However, I think my true inspiration for visiting all 175 sites is two-fold: I want to explore them for myself and entice others to do the same. In 2015-2016, over 31 million people visited the parks from Florida, the United States and around the world. Each person can become not only a park advocate, but a conservation ambassador as well.

Still a Duke student and looking to challenge yourself? North Carolina has over 40 state parks, with a passport to help keep you organized. Discover a new state park for yourself!