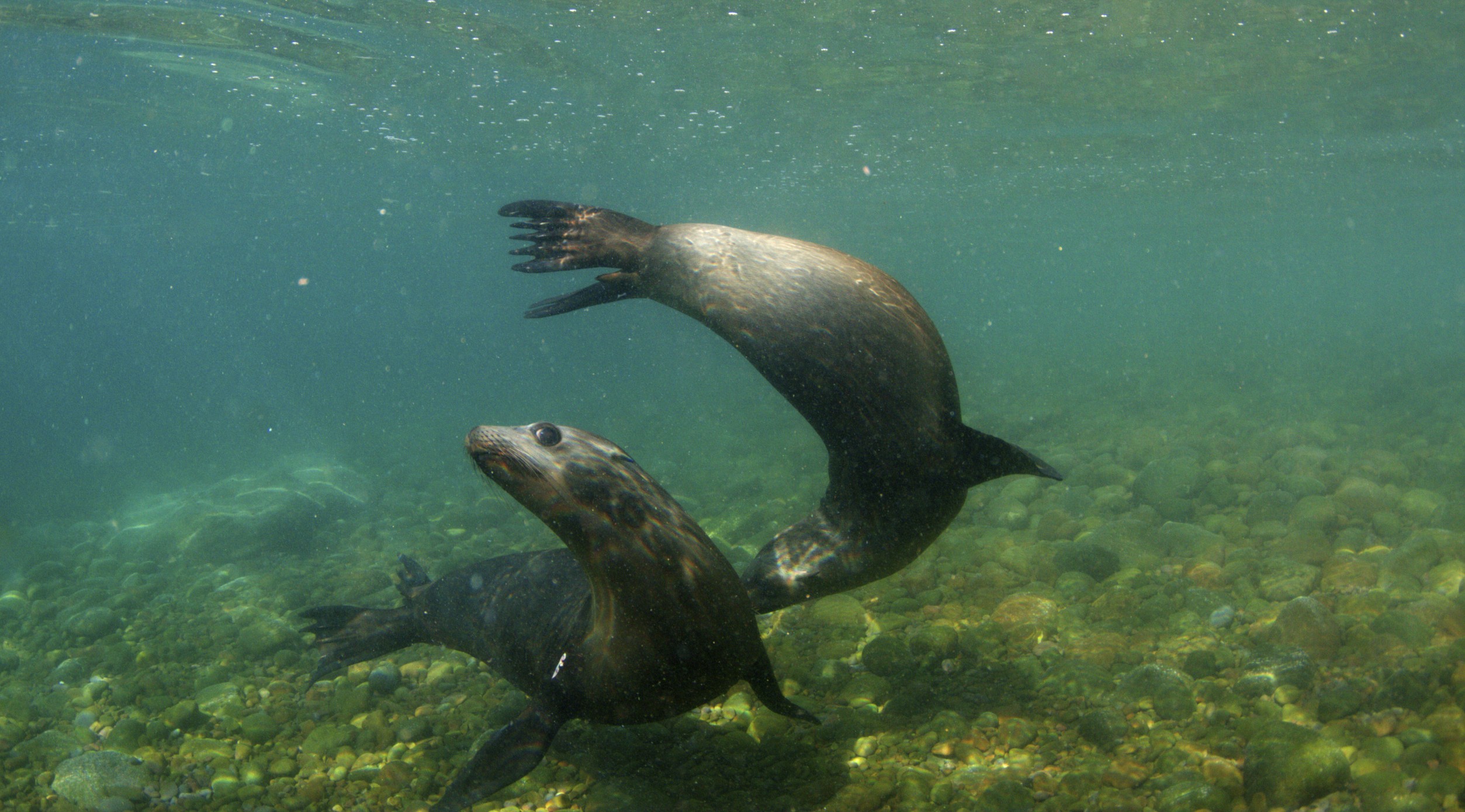 If you were stranded on a desert island, what two things would you most want with you?

I had heard this clichéd question previously during awkward ice breakers and forced small talk but never been able to settle on a wholly satisfying response. Thankfully I can now report  that after our four day camping trip in the “Midriff Islands” unexpectedly became five days with rations running thin, I have at last come to a decisive conclusion.

Now, along with providing the critical answer to a time-old question, our experiences in this collection of islands spanning the central portion of the Gulf of California gave us first-hand insights into island biogeography, the lives of small scale fishers and the indigenous Seri people, as well as the participatory processes of forming marine protected areas. However, it would be selfish of me to dive headlong into how we touched on all of these subjects given that I’d produce a small novel and rob my colleagues of the opportunity to share their own experiences as well. Instead I’d like to share with you some of the photos from one of the most spectacular marine safaris of my life and introduce some of the characters that made the adventure so rich.

We were fortunate enough to have join our expedition an extraordinary set of guides. Ben Wilder, the man who literally wrote the book on the islands’ flora, was to be our chief botanist and resident island biogeographer. Fernanda Perez Alarcón joining us from CoBi, a local organization focused on community and biodiversity, came not only to lend her cheerful demeanor but also her intimate knowledge of the complex participatory process to organize a complex multi-use marine protected area surrounding the more southerly island of San Pedro Nolasko. On top of this we were joined by five Comcáac, members of the indigenous people also known as the Seri, who came to welcome us and share in experiencing their marvelous homeland, the island of Tiburón on which we made our base camp. After four days of blustering winds, the calm waters that greeted us the morning of our departure seemed like a good a omen right of the bat. Sure enough, it didn’t take long for the Gulf to give us it’s blessing with a blast of whale breath dead ahead. As we motored up we soon realized it was not one but two fin whales. a mother and calf cruising through the calm waters.

A third massive adult soon joined them and we realized there were even more in the distance making a total of six. Clearly unperturbed by our presence the mother and calf surfaced close enough beside our boat for the spray from their breath to drift across those of us sitting on the bow. At that distance the sound of their massive lungs gulping air resonates in your own chest in an indescribably powerful way.  I was pleased to discover that these two had a rather fresh odorless breath unlike some of their cousins, the humpbacks of Monterey who can have some truly rank blowhole emissions.  Shortly after making this comment to a companion at the bow with me, a pair of humpbacks appeared as if to defend their honor. Our boat captain, Cosmé positioned us skillfully to capture photos of their massive flukes as they dove to aid in the local monitoring efforts. Much like our finger prints the flukes of humpbacks can be used to uniquely identify individuals by their bumps, notches, and patterns. Soon after leaving the whales we came across an even more remarkable sight. A dark dorsal fin cut through the water not far ahead of us. As we approached we realized it belonged to a twelve foot blue shark. She cut effortlessly through the water between our two boats, circling and approaching before turning away again. Fishing pressure on sharks and rays in the gulf of California remains incredibly intense. To see a blue shark at all is rare but to see such a large one is truly extraordinary. Massive gillnets that can be up to a kilometer long have taken a serious toll on the cartilaginous fishes of the gulf but even the individuals clever enough to elude these death traps will often be harpooned opportunistically if they swim too close to a fishing boat. A bit of me wanted to throw something at her, scare her off so she wouldn’t make the same mistake with a boat loaded with hungry fisherman. But it seemed a crime to think of spoiling the creature’s perfect peace as she wended her way through the waves. Instead we motored on.

A flurry of activity ahead of us looked at first just like a couple football fields worth of the ocean had somehow begun to boil. It quickly became clear that the churning water was in fact a massive pod of common dolphin. Dolphins are uniquely satisfying animals to spend time with because they are clearly playing the tourist as as much as you are. As soon as we got close enough to be noticed the  group changed course and headed towards us. Small groups broke off and swam under and around our boat excitedly. More came to ride the wake and as I leaned over the front I discovered more riding the bow waves too. The sounds of their enthusiastic whistles, chirs, and buzzes filled the air as they leapt and darted all around us. They made it painfully hard to say goodbye as the most playful trailed far after us leaping and darting through our wake.

The ocean was so teaming with life that day we had to eventually just put our heads down and keep moving or we would have never left the water. But when we did arrive at our campsite it certainly did not disappoint. Our home base on Tiburón island sat beside a beautiful sheltered bay protected from the prevailing winds. Then was not the time to fully enjoy it though as we had a busy agenda to keep. We hastily made camp then headed back to the boat to use the good weather to get to the more distant San Esteban island.

I will leave San Esteban for others to describe but I would be remiss were I not to at least share a couple photos of the fantastic herpetological highlights.  Without any other large predators to control them, the island had come to be dominated by charismatic lizards scurrying on, under and over the rich plant life. Spiny tailed iguanas climbed to the tops of the columnar Cardón cacti to eat their tasty fruits while smaller lizards with banded tails that they curled in the air would dart from hiding places half buried in the sand. The greatest highlight for me, however, was the discovery of the San Esteban Chuckwalla, a delightfully chunky, rusty orange lizard found only on this one island. Confident either in his invisibility or the deterrent of his prickly perch he had no problem with me getting up close and personal. After our wander around the island with Ben pointing out several endemic cacti and an assemblage of hardy shrubs we even managed to get in a snorkel with the island’s resident sea lions. These two were particularly curious about the awkward rubberized visitors that had gallumphed their way to their home and came to inspect us while doing graceful spins, twists, and turns in the water. Even having experienced it myself, I still find it hard to believe how many incredible encounters we had just that first day. All I know is that I’m glad I have twenty something witnesses and some photographic evidence to corroborate my story. While, certainly we were very fortunate in our encounters that day, it is a testament to the incredible richness of these environments that we even had the possibility of coming across such a diverse array of wildlife.

Over the next three days encounter after encounter reinforced the great wealth of this area and the tremendous need for responsible stewardship and protection. When the last night rolled around and I laid on the beach looking at the incredible array of stars, I spent one particularly striking shooting star’s wish on hoping we could somehow stay just a bit longer. The following day my wish was granted as a fierce wind picked up and forced us to postpone our departure by 24 hours. This of course delighted me but was met with some amount of anxiety about our food stock which we had estimate for three fewer people and a whole day less.

And here, my friends, is where we came to the definitive answer to that old question of what best to bring to your desert island stranding. The answer: Cosmé and Guacho. No question. The self proclaimed “Mexican Chuck Norris” and his ever-cheerful brother, our boat captains, having earlier chatted with us about their transition from small-scale fishers to conservationists, took it upon themselves to ply the skills of their previous trade. In the late afternoon they set off into the rough seas with a bit of fishing line.  An hour and a half later they returned with a mountain of fresh fish for us. They even gave a tutorial on how to gut, clean and filet the collection of grouper, porgies, and mojarras. So don’t forget, if you’re going to get stranded on a desert island, the two things you most definitely want to bring are Cosmé and Guacho. If you can’t find them, then you’re probably out of luck.