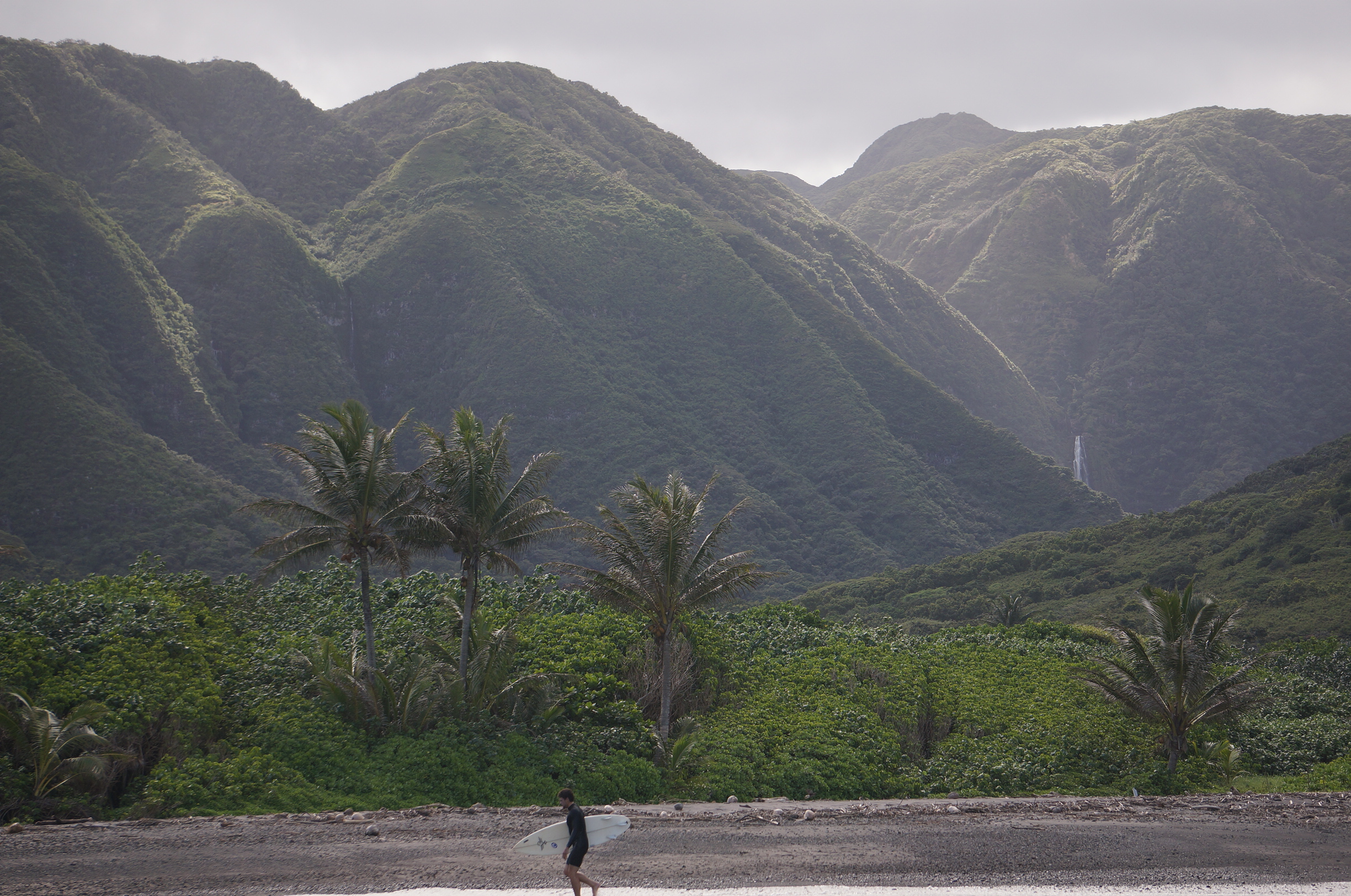 I slashed the stick through the spider web and looked back. My friends were a safe distance behind

I turned and rounded the corner on the dirt road.

Three deer skidded to a halt.

I dropped the stick and unslung the rifle from my shoulder.

The deer began to redirect.

Moloka’i, like much of Hawaii, has a problem with invasive deer. The Hawaiian Islands themselves are a case study in the fragile nature of island ecosystems – ecosystems that are particularly prone to invasive species.

Deer, pigs, plants, and umpteen other non-native plants and animals have seriously altered the state of many Hawaiian islands.

Of course, there are plenty of haoles (white people) on Moloka’i too, which many locals see as invasive species in and of themselves. Much of the island’s land on is owned by a small handful of white people.

My (white) friends, Bart and his girlfriend Al, were working for one of these white-owned ranches on Moloka’i when they invited me to visit them for a week.

Moloka’i offers the illusion of paradise, but wildness is its true foundation. The temperature is often comfortable, but the sun beats down with a fierce intensity. The sea is blue, but the waves pound with a ferocity I haven’t encountered elsewhere. They land on rocks and reef breaks.

The remaining population of the US leper colony lives on a spit beneath the world’s highest sea cliffs.

I grew up body-surfing in North Carolina and there are many places left that I have yet to surf. However, I will be surprised if I ever surf waves as heavy as those in Hawaii.

Bart warned me about the waves. I am a strong swimmer and doubted him, but he was right.

The waves in Hawaii have a longer period than most– they are drawn out more, meaning there is more space in between each one. This allows the waves to build up momentum, and they land heavily.

We surfed my first day on Moloka’i; we surfed almost every day. The surfing was amazing, but certainly not the relatively carefree experience I knew from home.

On a Saturday, we drove an hour and a half out to the western side of the island. Humpback whales breached in between us and O’ahu. Sharks swam somewhere in the blue.

Getting past the first break was a challenge. The waves were so steep. And when they landed on you, it felt like someone dropping a weight on you.

It knocked you down.

The waves were so steep and heavy that you just couldn’t get caught in the break. And they landed on variety of rocks and sand.

It pummeled you, it exhausted you.

When we took surfing breaks, we went for long rock scrambles up and down the coast.

Towards the end of the day we drove back to attend a charity dinner.

I rode shotgun and had turned to tell Bart something when

A buck, aimed like a missile, broke its neck and the windshield of our truck.

Trucks are a precious commodity on a small island like Moloka’i – you can sell one for much more than you could get on the mainland.

Bart’s truck was ruined for resale.

Meat is a precious commodity too, but we were too shaken to stop and grab the meat – something others teased us about it when they heard the story.

We bailed on dinner.

Later that night, Bart told stories of living out there, on the agricultural edge of the jungle.

I remembered sitting in a bar in Hope, Alaska, with a friend who is gone now, and hearing locals tell me stories from the North Slope.

Bart mentioned that even after living on the island for a year, he and Al hadn’t truly been accepted by the local population. It seems to happen only if you marry a local.

I hacked and hacked and cut and finally destroyed a tiny patch of invasive jungle. The machete slashed through vines, but fewer over time. Bart’s dog Koa kept trying to jump ahead of our flashing machetes.

We had gone for a walk up into the mountains. Our road had morphed into a pig trail. After 300 yards of clearing, we ran into a cliff and paused for lunch.

The creeping fog carried cold with it.

Bart says that people in this particular community don’t believe in buying things that come from the earth. It’s more of a bartering and giving system, where a lot of meat is exchanged for vegetables or fruits.

Two guys had caught a tuna. They planned to fly out the next day, so we cooked it up and had a party.

I walked down a spider choked path (Moloka’i has a truly astounding number of spiders, all non-venomous) to the beach. Hump-backed whales breached and frothed between us and Maui.

The snorkeling was fine- lots of fish, but lots of bleaching too.

Bart’s friend Trent showed up not too long after me. Bart and Trent knew each other from sailing across the Pacific, and I had once spent a week with Bart at Trent’s house in Mission Beach, surfing.

We celebrate Trent’s arrival by surfing all day. Point breaks, reef breaks, back to point breaks. I tried my best to be brave and keep up.

I followed their surfing advice and finally saw why some of my friends think surfing is better than kayaking. When a wave puts you down gently, it’s a pretty great feeling.

I also spent a lot of time underwater – including a few times that I was pretty ready to surface, but couldn’t.

Some of the simple amenities of the ranch were pretty astonishing. An outdoor shower overlooked flowering trees to views of Maui across the straight.

A truly tropical array of birds would wake us at dawn each morning.

On our last full day, Bart and I walked up some few thousand vertical feet into the cloud forest. We started at a heiau – a sacred temple.

Apparently, pre-contact, island natives would carry stones up and over the ridiculously steep precipice from the beach to the temple (part of the same formation as the world’s tallest sea cliffs).

It was pretty astonishing to leave our place of relatively little rain and reach one of constant precipitation with a relatively short walk.

The rifle was not mine and I was not used to it.

The deer were quick.

By the time the safety was off and the rifle was aimed – I had nothing to aim at.

Koa gave chase, but to no avail.

We went home meatless, but we did not go hungry.