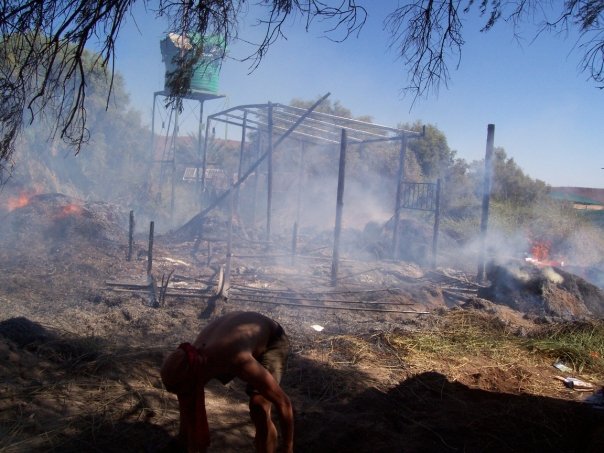 “Fire! There’s a fire!” A scream sprinted past us in the seemingly overwhelming noon-time heat in Namibia’s Kunene desert.

We had been lounging at field camp, hiding from the sun. A few people began to shuttle water from the camp borehole to a smoking patch of reeds. Having never fought a fire before and unsure of what to do, I joined the assembly line.

Soon, flames crawled into sight. They licked highly combustible, never-burned reeds – reeds that choked the area around the well, likely hiding potentially venomous scorpions and snakes, which might try to flee the fire.

As this thought struck me, I noticed the smoke was spreading quickly through the reeds. The strategy of pouring water on a single spot would not help. Others realized this too. Our assembly line disintegrated.

Through the mounting chaos, I noticed that people were beginning to move food and belongings away from the camp and into the desert.

A new effort to join.

I donned my sunglasses, wet my shirt, tied it around my nose and mouth, and tightened the straps on my Chaco’s.

Running back to the borehole area felt like walking into an open oven. The reeds smoldered with a sickly sweet suffocating smoke.

Haul something out, chuck it on the ground, sprint back. Repeat.

I was constantly readjusting my high-tech ember deflection device (a wet t-shirt). The sweat on the back of my head and my face kept it from having much traction.

As it became harder to breathe through the growing smoke, I realized that our plastic water storage tub was melting. Simultaneously, our generator failed, meaning we had no water within about 15 miles to fight the fire.

I began looking for instruments to battle the flames instead of water buckets. Using hand-blistering shovels, a bonesaw, and dust and stones from the desert, camp members sought to create a fire lane between the few standing buildings and the burning reeds.

Twenty poorly-equipped people were little match for thick patches of smoking reeds. However, about 4 hours after the fire had started, our neighbors from the nearest village (15 miles away) arrived in an enormous trash-hauling truck.

We cheered. They shouted at me in Afrikaans, assuming I could understand, at each other in Damara, and the fire continued its steady, wind-driven march through our camp.

However, after a moment, our new allies simply stood around laughing. I grew confused and incensed. I began to work even harder on my fire lane, hoping that my efforts would inspire them.

When I paused for a break, though, I realized the wisdom of our neighbors.

There were only so many reeds that could burn, we were clearly unable to stop the fire; it would run out of fuel on its own, so why not drag the few last possessions out to the desert and enjoy the show?

The fire finally slowed just after dark. After doing a final patrol, I tried to wipe the char off my feet, in vain.

I ventured back to my tent and slid into my sleeping bag, hoping that no elephants, lions, leopards, or hyenas would lurk around our possession-strewn camp in the dark.